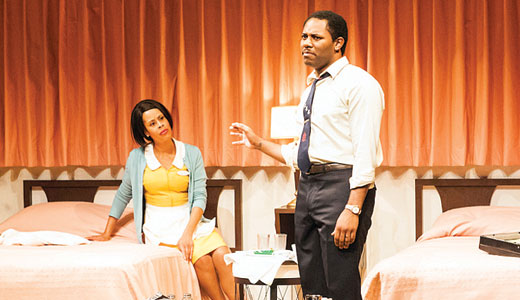 ‘The Mountaintop’
An Actors Theatre production. Directed by Giovanna Sardelli. Continues through Oct. 27 at Actors Theatre, 316 W. Main St. For tickets or more info, go to actorstheatre.org or call 584-1205.

Martin Luther King Jr. has been dead for more years than he lived. The visionary language and soaring rhythms of his speeches are embedded in the American — and global — imagination. He’s memorialized by a federal holiday. His name can be found on hundreds of streets, buildings, parks and schools around the country.

King’s status as an icon obscures him in two ways: It reduces the complexity of the man into a set of sound bites and symbols, and it confers upon his life and work a misleading sense of inevitability — as if the things he accomplished would have happened with or without him.

“The Mountaintop,” Katori Hall’s 2009 play about King’s last night alive, now running at Actors Theatre in a stirring production directed by Giovanna Sardelli, is a powerful attempt to portray the man not standing on a pedestal, but in a motel room where his lofty rhetoric is juxtaposed with the sour smell of his tired feet. In that motel room, we get a glimpse of King in the turbulent current of his life: thinking, planning, writing, phoning his wife, comforting his daughter, craving a smoke. And over the course of the play we get a moving sense of what his assassination meant — of life interrupted and work left unfinished by a man whose vision of the future was growing richer and more detailed by the day.

In Hall’s fictionalized account of this last night, King (Larry Powell) calls room service to summon a cup of coffee, and it’s delivered by a maid named Camae (Dominique Morisseau), an irreverent, cussing force of nature who dazzles and provokes King with her own mix of earthy humor, sexuality and witty rage.

In the play’s best moments — and the play is full of great moments — Powell and Morisseau meld brilliant language and flamboyant physical comedy to create the stuff of laughter and tears. Whether Morisseau is extracting a Pall Mall from her pack with the virtuoso flick of a practiced smoker, standing atop the bed exhorting King to address white America with vivid foul-mouthed speech, or smacking King with a pillow as feathers fly, she’s a commanding presence (thanks in no small measure to an outstanding look created by costume designer Amy Clark).

Powell, too, is an impressive presence; not only does he express the power and intensity of King’s public persona, but he also gives us a glimpse into the private man’s pathos and longing — not just with words but with gestures as subtle as the look in his eye — a notable feat in a space like the Pamela Brown Auditorium.

There are magical elements in this play, including a plot device and an overwrought phone conversation that might be better suited to sketch comedy than to a work otherwise infused with great wit and high purpose. And yet, those elements (whose dramatic flaw is that they diminish the play’s powerful drive) finally give way to a surging conclusion; King’s hotel room (admirably designed by Andrew Boyce) suddenly dissolves into a starlit set and a bravura multi-media coda (media designer Philip Allgeier, and original music and sound designer Anthony Mattana) that challenges audiences in these troubled times — and aren’t all our times troubled? — to pick up the baton of change and pass it along to the future.