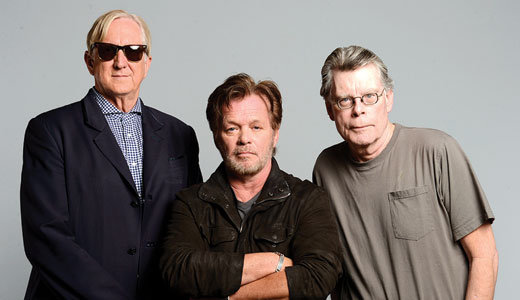 What do you get when you stick a best-selling author, a Grammy award-winning rocker and an Oscar-winning songwriter and record producer in the same room? Lots of ego? A general lack of social skills? Maybe, if you’re lucky, theatrical magic.

Stephen King, John Mellencamp and T-Bone Burnett are not names one typically uses in the same sentence. As Stephen Colbert put it when interviewing the dynamic trio, “This is an unusual mélange of people to have in one place. I was hoping to get J.K. Rowling and Bob Seger and Phil Spector.” King, Mellencamp and Burnett graced Colbert’s “Report” to talk about their joint project, a Southern gothic musical titled “Ghost Brothers of Darkland County.”

It all started when Mellencamp bought a cabin on Lake Monroe in Indiana, which the owners said was haunted. He was skeptical, until they filled him in on the grisly tale. In 1935, two brothers and one’s girlfriend found themselves in the cabin. The brothers fought; one struck the other on the head with a fireplace poker, killing him instantly; the accidental murderer and his gal pal set off to find help. Before they could reach town, however, their car spun out of control, plunging them into the watery depths of the lake. Finally, in the cherry on top of this gruesome sundae, when the police arrived at the cabin the next morning, they found the second brother lying prostrate on the lawn, his head chewed off by a wild animal.

“That’s Steve’s favorite part,” Mellencamp chuckled. The detail is what hooked the novelist, who quipped to a blushing Colbert, “It gives a new meaning to the term ‘getting head,’ doesn’t it?” The duo began work on the show 13 years ago, bringing in Burnett a couple of years later. It was not always smooth sailing. As Mellencamp explains, “I don’t collaborate well. I don’t play well with the other kids. Steve sits in a room and types. And the only person that has any social skills at all is T-Bone.”

Artistically, however, it was a match made in horror heaven. “Ghost Brothers” is a gripping tale, told with King’s expert hand and sprinkled with songs that scream Americana. It’s not your typical musical, but the primal themes of family secrets, the legacy of guilt and the tug of history have all the makings of visceral theater.

It was Mellencamp’s music that first caught the eye of Susan Booth, director of the national touring production and the artistic director of Atlanta’s Alliance Theatre, where the production premiered. “As a Midwesterner who grew up reading King and listening to Mellencamp — and now living in the South — I felt like the world of the play made personal sense to me,” she explains. “I approached it initially as a producer … but the deeper I got into the piece and got to know the gents’ passion for it and commitment to it, I asked them to let me step in as director, as well.”

All three collaborators have been very involved with the production process, something Booth describes as a privilege. “Here are three guys with international reputations and iconic careers, and all three of them show up 100 percent focused on the work, the process, and are utterly collaborative and without ego,” she marvels. “They’re a kind of master class in artistry.”

As for Booth’s production itself, she describes it as “very primal — a muscular dance with fate.” Based on the idea of a traveling medicine show, the play is intimate and deeply tied to its Southern roots. “We deliberately avoid the trappings of big Broadway musical theater and instead rely on great music, great actors and the power of the audience’s imagination. It’s like sitting around a campfire,” says Booth. “A great ghost story fused with a killer evening of songs.”

And while the touring show originated in Atlanta, the company is full of Louisville love. Booth herself has directed at Actors Theatre, and one of the brothers is played by Louisville native Peter Albrink. Asked about the gang’s stop in Derby City this week, Booth enthuses, “I love Louisville. I really enjoy the Waterfront, the art galleries and the restaurants. And Peter’s told us all we have to root for the Cards.”

With Halloween looming on the horizon, a Southern-fried, based-on-a-true-story ghost story may be just the ticket to get you in the October spirit.