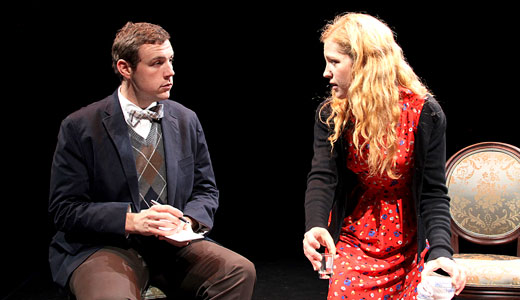 ‘Auctioning the Ainsleys’
A Theatre [502] production. Directed by Amy Attaway. Continues through Oct. 12 at the Victor Jory Theatre, Actors Theatre of Louisville, 316 W. Main St. For tickets and more info, go to theatre502.org.

Laura Schellhardt’s “Auctioning the Ainsleys” is a comically tragic play about the things we keep and why we keep them. Put on by Theatre [502], it’s also about family, grief and loss — a play that asks questions about what is important in a world where we are increasingly obsessed with objects.

The Ainsleys are an eccentric family of auctioneers who have lost their patriarchal and dominating father. The event has left the Ainsley children in a state of emotional paralysis, unable to detach from the objects that hold so much of their past. To help her children move on, their mother, Alice (Pat Allison), has decided to auction off all of the things in the Ainsley house as well as the house itself. Alice is in failing health and is losing her memory. She has hired an aide, Arthur (Lucas Adams), to record her memories, so that the family history will not be lost. As Arthur looks deeper into the history of each object and the children themselves, painful family secrets begin to emerge.

The children include Annalee Ainsley (Cara Hicks), so obsessed with the histories behind the objects that she has begun stapling notes to her chest; the auctioneering protégé Avery (Leah Roberts); the sensitive Amelia (Erica McClure); and the histrionic and gesticulating Aiden, played with utter comic abandon by Neill Robertson.

This is a play largely driven by character and dialogue, with Arthur’s role loosely driving the plot and pushing the Ainsleys to face the stories behind the objects that have been haunting them. It relies on the strength of a comically gifted ensemble, a careful design and precise direction by Amy Attaway. The dialogue-heavy scenes are emphasized by Avery’s gavel and eventually her hand. The gavel becomes the symbolic object for the unexpressed anger of each of the characters as they come closer to the truths of their past, their relationship to their father, mother and each other.

Attaway’s storytelling here is clean and straightforward, never imposing itself but guiding the play where it needs to go. The piece is cerebral and episodic in many ways, and, in the hands of less able artists, could easily lose its way.

There is a little word, “piff,” that is repeated by Amelia Ainsley. It becomes the thematic word of the night, as it seems to capture the sense of loss the Ainsleys are experiencing. It is a word that suggests letting go, but it also implies something magical. There is a highly magical way in which the objects of Alice’s life begin to disappear before her and before our eyes in a “piff.” Attaway gives theatrical care to these moments, dazzling the audience just a little, while also reminding us how temporary everything is.