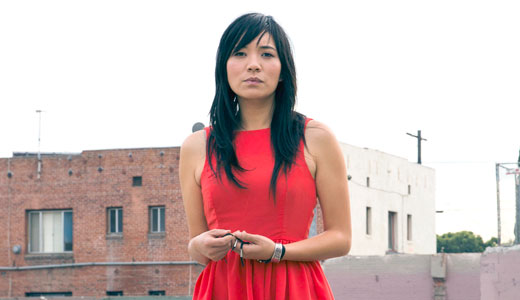 Thao Nguyen stepped away from the music business a couple of years ago, and it was the best thing she could have done for her career. After five years and three full-length albums, the San Francisco resident put her numerous instruments down and went to prison.

She wasn’t in trouble. Nguyen had as much, if not more, passion for women’s advocacy than she did for music. She decided to act on her interest by volunteering with the California Coalition for Women Prisoners. She was stunned to meet many women whose crimes had been committed while defending themselves from domestic violence attacks.

Noting that many of her fans are likely also fans of the Netflix series “Orange is the New Black,” Nguyen was asked if she enjoys the series and sees any validity to its depiction of women in prison. “Yeah, on a lot of levels. I have, like many, devoured it. At first, I was a little skeptical, of course, but around the third or fourth episode, when they start presenting the different stories of all the folks inside — obviously, there are concessions made to be entertaining, but the compassion demonstrated is what needs to happen on a greater scale.”

Her compassion was formed, to some degree, by absorbing music from different cultures. As a child, she was obsessed with Motown. An older brother turned her onto hip-hop, and she couldn’t escape ’90s pop. As she began playing guitar, she discovered rural blues, old-time and bluegrass.

The fourth album by her band, Thao & the Get Down Stay Down, is called We the Common. It has received much acclaim since its release last winter, and the band has spent a lot of time playing at festivals since. Nguyen has been glad for the chances to be heard, but says she’s found the best crowds are, not surprisingly, the nighttime crowds who have already starting getting loose. “It always feels more natural to play in the evening time … it’s an easier crowd. But last week, at Austin City Limits, we played in the daytime and people were acting like it was the nighttime,” she laughs.

Nguyen has displayed a sharp sense of humor in several online videos and has been whipping out her cover of Ludacris’ “What’s Your Fantasy” on her current tour. Nguyen says, “It’s one of the highlights — for me — of the set. I do it more often than I don’t do it … It’s so hard not to. But it’s better when it’s a surprise.”

Combining humor and activism comes naturally to the musician, noting that her humor helps keep her messages from becoming too tedious for fans who like the tunes but don’t otherwise care. “It’s important for me to be accessible and to be pretty straightforward about what I’m about.”

Her non-musical work has helped her grow as a songwriter. “I think so. I think the songs are more outward-looking and outward-reaching … I think there’s a level of consciousness and humanity in these songs that didn’t exist before, and that’s because of all the people I’ve met, and all the amazing strength I’ve witnessed.”