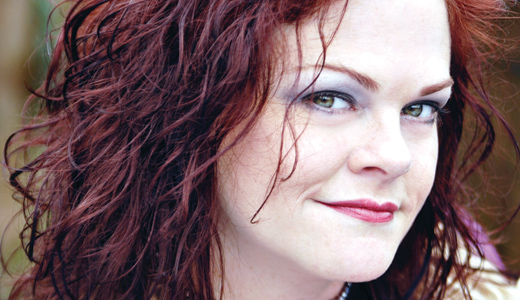 I have to admit the press release had me at “Girl on Girl.” This Nashville-based comedy series is making its debut in Louisville tonight with local and regional LGBT comedians and performers. In Nashville, “Girl on Girl” is the longest running comedy and variety show, which creator Christy Eidson developed as a way to accommodate an underserved market. “I want to take this show to other markets and show that girls and gays can put on just as good of a show, if not better, than the straight boys,” she says. Tonight’s performance includes Eidson, Peter Depp and Jessica Carter from Nashville, as well as local favorites Holly Lynnea, Divinity Rose and Jacob Mudd. And besides comedy, you can also expect magic, music, burlesque, pole-dancing and more. —Sara Havens

The Clifton Center once again delivers a high-profile show not to be missed. This evening is an homage to virtuosity, where Miró will perform two compositions that require absolute exertion from their strings. Opening the program is Schubert’s Quartet No. 14 in D minor — “D. 810,” more simply titled “Death and the Maiden.” Whether it calls for rigorous movements or a heart-wrenching melody, Miró must adopt the emotions of their notes to maintain composure. Following the intermission is Beethoven’s Quartet in B-flat Major, “Op. 130/133,” a piece that received mixed reactions after completion in 1825 for its colossal finale titled “Great Fugue.” The new finale, written in 1826, is considered Beethoven’s last completed composition before his death. Miró will honor the original quartet with this enormous finale in its true form. —Lara Kinne

In the face of macro issues like global warming or economic collapse, do the everyday acts of kindness and care have any significant impact on the world at large? Charles Eisenstein, TED speaker and author of “Sacred Economics: Money, Gift & Society in an Age of Transition,” says yes. He believes that by nurturing connections with each other and the world, a just and sustainable community will emerge. Eisenstein will explain his optimistic worldview, which draws on radical economic theory and philosophy, to Louisville Friday in a speech titled, “The More Beautiful World Our Hearts Know is Possible.” The lecture is sponsored by Cultivating Connections. —April Corbin

Du Tonc is the latest offspring of Australian synth pop-lover Matt Van Schie (of Van She) and London producer Mighty Mouse. Louisville is a highlight on the map of Du Tonc’s tour circuit, making their American debut in NYC over the summer and vacillating between the U.S. and the U.K. in several trips. Now they return to complete a night of DJs at Zanzabar on Friday. Start with opening sets by locals OKDeejays and Jason Shelton, followed by electro-house grooves courtesy of Lane 8, who comes from San Francisco. Expect to hear a barrage of new mixes off Du Tonc’s debut, Surging Memories, including their slick singles “Darkness,” “Surging Memories” and “Rise,” which have stormed the Internet since their formation less than a year ago. Their textured, synth-disco sounds are appropriate for the dance-crazed vortex Zanzabar will become. —Lara Kinne

At fall’s first whiff, it’s time to roll out the crispy brown carpet of fallen leaves for all the St. James Court Art Show revelers. As they descend upon Old Louisville this weekend, they’ll no doubt follow the beaten path of locals into the rustic Second Street tavern known as the Mag Bar. For 15 years, regional artists who have felt slighted by the high-profile art show have taken over this space to show off their own work, most of which fares better than a generic lawn ornament or over-priced candle holder you might find up the street. More than 20 artists are participating at this year’s UnFair, including Paul Hershaw, Judson Baker, Gary Quick, Suzanne Edds, Gary Bell and more. —Sara Havens

Finding no known words to describe their festival, the Bunbury Theatre Company decided to go with “dramedy”: a combination of drama and comedy. Each night of the fest, five one-act plays will be performed, including “Unwrap Your Candy” and “Wildwood Park,” unsettling and comical stories for adults written by Doug Wright; “For Whom The Southern Belle Tolls,” a parody of “The Glass Menagerie”; “The Chalky White Substance” by Tennessee Williams about a future fallout zone; and “I’m Herbert,” a discussion of the hazy details of two elderly people’s long lives. I recently read a study about how laughter wards off respiratory infections and reduces the number of colds you get, so attending this Dramedy Fest could actually make you feel better. Go out, watch five plays and thank me in the morning. —Sarah Duncan

Presented by U of L’s Department of Classical and Modern Languages’ Spanish section in conjunction with the Spanish-language newspaper Al Dia en America, the 20th annual Latin American Film Festival is highlighted by Guatemalan director Rodolfo Espinosa’s appearance at two screenings of his 2003 comedy “Russian Girl” (on Friday and Saturday at 8 p.m. at the Floyd Theater). Screenings and discussions will be spread out between the Floyd and the Ekstrom Library, including a conference this weekend on Latin American and U.S. Latino movies called “Reel Latin America.” Seven other films — a pair of docs and a few dramas, all subtitled in English — have been imported from a half-dozen other lands down under (the USA). Rob Schneider will not be attending this year. —Peter Berkowitz

For an uplifting example of the best of the human spirit happening right here inside the Watterson, consider this: Venerable record store Underground Sounds is throwing a welcoming partner for a new rival, Modern Cult Records, which opens Sunday at 10 a.m. The free and all-ages evening features a handful of “heavy” local bands (sonically, philosophically or both) in Sapat, Jaye Jayle, New Bravado and Snow Snake, plus a headlining set by the Appalachian doom/psych/blues-rock band U.S. Christmas. The newer store, located at 2100 Frankfort Ave., is owned by a pair of former Underground employees and promises a healthy selection of heavy, weird and otherwise fun titles. The brotherly love shown tonight indicates the owners are starting out with some good karma on their side. —Peter Berkowitz

If you’re the type of person who likes to know about something interesting first, before your friends or any other latecomers (ahem, “Breaking Bad” premiered in January 2008, cough, cough), there’s still time to discover Sarah Jarosz (but she’s not like “Breaking Bad” in any way, really, just so we’re clear). The recent Forecastle Festival afternoon act is only 22 (born mere months before Nirvana broke out — and, again, nothing like that thing, either. Sorry.) and is already a Grammy nominee. Her third album, Build Me Up From Bones, was just released by the substantial Sugar Hill label. Like fellow prodigies Sara Watkins and Alison Krauss, this bluegrass-pop fusioneer has got a bright future, so get in while the gettin’s good. —Peter Berkowitz

The AIDS Walk, 5k Run and Pet Walk return to Waterfront Park on Oct. 13. That will also be a great time to see the more than 160 Kentucky and Southern Indiana panels of the Nobel Prize-nominated AIDS Memorial Quilt, which is in town to celebrate the 20th anniversary of the Louisville AIDS Walk. The quilt was started in 1987 and features handmade 3-by-12-foot panels created by family and friends honoring someone who died of AIDS. Today it has more than 48,000 panels and weighs over fours tons. New this year is a display of the panels at the Oct. 5 Quilt Preview, held at the Louisville Ballet, 326 E. Main St., from 6-9 p.m. (There’s a $20 suggested donation that will go to local HIV/AIDS services). —Jo Anne Triplett

Jeanne Tessier’s life is the stuff of folk songs. Growing up in a small town in northern Illinois, she would help her father, a colorblind sign painter, with his work, sketching her own creations in chalk on her neighborhood’s sidewalks. Tessier’s mother instilled in her a love of language, sending her to the dictionary every time her daughter stumbled across an unknown word. Now, as an adult, Tessier creates vivid works of folk art, integrating found objects, haunting imagery and powerful text. As she explains, “My art almost always brings image and word together, often on the same surface. I make art from available materials — found objects, scraps, recycled ceiling panels, remnants of ribbon, found feathers, broken glass, etc. I appreciate that some of my artwork contains objects or elements which possess a history separate from, yet also linked with, mine.” —Jennifer Harlan

Now’s your chance to see what all the fuss was about. In case you have been hiding under a rock lately, there’s been some art controversy in town. Collaborators Devon Turley and Billy Twymon were asked by the management of the Mellwood Arts & Entertainment Center to remove three paintings from their exhibition “The Really Big Show,” stating they were “sacrilegious and pornographic (and) … not family-friendly.” The censored works feature female nudity, sex and religious subject matter. Now the show has moved to the Tim Faulkner Gallery, with the censored works on display with the rest of the exhibition. As I believe in self-censorship for adults and parental censorship for children (and so can see both sides of this story), I hope there will be future discussions between Mellwood, studio artists, shop owners and their clientele. —Jo Anne Triplett