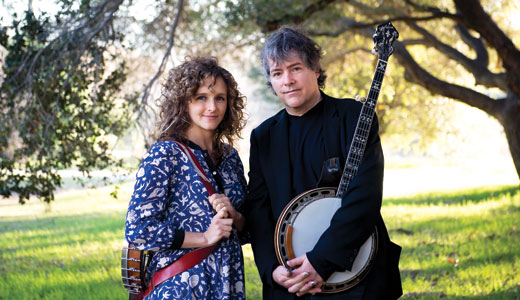 Banjo artist and singer Abigail Washburn is excited about many things in her life now: her baby Juno, touring with her husband Béla Fleck and returning to Louisville, a city with special meaning for her and Fleck.

“I’m pretty blissed-out with Juno; he’s so sweet,” says Washburn. He responds “really well” to the sound of the banjo, likely from hearing it prenatally, and, at only 4 months old, is strumming a piccolo banjo.

She has been working with Fleck on music for this tour, both new songs and new arrangements for pieces from both of their repertoires. “We’ve been piecing it together. We do have a baby, so that kind of takes away a lot of our free moments to write. We have managed to put together some pieces that are new to us together, including a classic Chinese song, and one of Béla’s tunes, ‘New South Africa,’ we’ve put together as a banjo piece. We’ve also written a new tune, in open C, that has a lot of back and forth between the two banjo styles.”

With cellist Ben Sollee and fiddler Casey Driessen, Washburn and Fleck toured and recorded as the Sparrow Quartet, playing music ranging from Appalachian mountain to Chinese folk to gospel. Washburn did not grow up with the latter; she discovered it through hearing African-American gospel. “When I got into college and I started actually singing, I joined the black gospel choir at my school right away. Now that I’m playing the banjo and singing — obviously, I’m a white girl (laughing), not one who sounds like Aretha Franklin or someone like that — I have my own voice. When I heard old mountain gospel, it sounded so soulful and old; you can’t even tell what color the people are that are singing it — it’s just soulful. I was really drawn into that.”

Also working on some Chinese music for the tour, Washburn, a former resident of that country, noted the pair are concerned about audience response: “It means a lot to us … we play this newfangled kind of ‘global progressive acoustic’ approach to this music, and if the audience is excited by it, then we’ll keep playing them.”

Other styles they will present include old-time and bluegrass. “There’s some stuff from Sparrow Quartet that we’ve turned into duo pieces. There’s pieces we’ve written separately that we’ve brought to each other, saying, ‘Hey, I think this would be a really neat thing to play clawhammer and three-finger style (or whatever you call what Béla does) together.’ And that’s been a really fun thing, to see how our original compositions fold into this duo,” Washburn says.

Material from Fleck’s work with African, Indian and classical music will also be included, such as melodic themes from Fleck’s new record, The Impostor, a concerto for banjo and symphony orchestra.

Both have been traveling with their own bands for many years, but this tour is stripped-down. Washburn says it has been “a beautiful thing for our relationship and our artistry and our musicality.”

“It’s really cool to look at how such simple melodies and accompaniments can be so meaningful,” she adds, “and how my simple way of playing against Béla’s ability to create a plethora of notes in a time space continuum that you never thought possible — that combination can sound like this rolling, gleaming, trickling, constant trance. We didn’t really expect that. We thought it might be nice for a few songs, but can we carry a whole night with it? I think we can.

“There’s just such a glorious sound between the two styles coming together, this rippling beautiful water sounds. We try to be really thoughtful about ‘How do you use both styles to create that, and at other times, create a ton of space?’ A number of the songs are just me singing with Béla playing some beautiful simple accompaniment, like Doc Watson’s ‘And Am I Born to Die,’ a Primitive Baptist song.”

She closed by talking about how Louisville is a special place for Béla and her, for different reasons. “I think it’s one of the more exciting towns around, with this burgeoning arts scene, and every time I’ve played Louisville, I feel like there’s a warmth and enthusiasm and creative energy in the audience that’s really uplifting.”