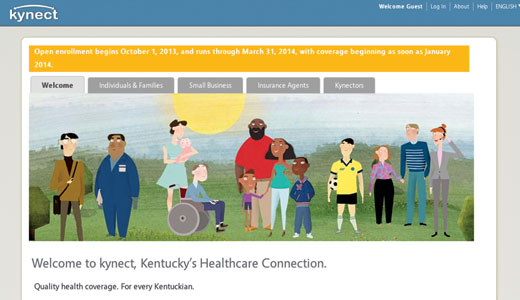 As the federal government shut down two weeks ago over Congressional Republicans’ attempt to gut the Affordable Care Act, the centerpiece of the landmark health care law launched in Kentucky. It sparked a rush of interested customers and shined a national spotlight on the only Southern state to fully commit to an expansion of Medicaid and the creation of its own health benefit exchange.

Days after the launch, Sens. Mitch McConnell and Rand Paul penned an op-ed bashing Gov. Steve Beshear for proudly pushing Obamacare, saying “Kentuckians aren’t buying it.” But by the time their words were printed, the objective evidence in Kentucky had already begun to refute their claim.

The amount of people swarming the Kentucky benefit exchange website, kynect.ky.gov, on the first day was so unexpected that it effectively crashed the site for six hours, with more than 88,000 unique visitors that day alone.

After adding additional website servers, the glitches have been mostly ironed out, and the totals from the first two weeks of operation are impressive: 23,112 applications have been completed and 10,990 individuals are now enrolled in a health insurance plan for next year, either in a private insurance plan with possible subsidy assistance or in Medicaid.

Kentucky is now in the spotlight of the national media, as the reddish Southern state of McConnell and Paul has somehow emerged as perhaps the most successful state in the country in terms of the operation of its new exchange.

While the Republican Party of Kentucky has attempted to mock the opening day glitches of Kynect and cast it as a train wreck, a growing number of uninsured Kentuckians — of whom roughly 640,000 will be eligible to obtain insurance on the exchange — are going to Kynect to find out the truth about their new health-care options, as the Beshear administration and health-care advocates brace for the wave.

The face of the national media’s praise over Kentucky’s implementation of Obamacare is an unlikely one to many, as he won re-election in 2011 by openly running against many of President Obama’s policies: Gov. Steve Beshear. After two weeks of praising his implementation of Kynect in a New York Times op-ed and national television appearances, several pundits claimed Beshear is currently the most effective advocate for Obamacare in the country.

In an interview with LEO Weekly, Beshear repeated the line that his actions to expand Medicaid and create the exchange were the right thing to do, both morally and economically — as Kentucky suffers from some of the worst health rankings in the country, and an independent study estimated the move will create 17,000 new jobs and help the state budget throughout the coming years.

“We’re going to change the course of Kentucky history,” says Beshear. “We’ve set the process in motion that will change the health status of this state over the next generation significantly.”

The website for the national exchange — used by the residents of states who did not set up their own exchange — has been an abject failure so far, with people not able to log in to apply for insurance and a resolution seemingly far away.

Beshear says the relative success of Kynect’s website is yet another vindication of his move, and he’s proud to share Kentucky’s success with everyone who will hear it.

“I’m excited to tell our story,” says Beshear. “We are the gold standard when it comes to the health benefit exchanges, and I’m proud of it. Our people have worked awfully hard to make this work, and they deserve the credit for it.”

As for the critics of the Affordable Care Act and the “web of misinformation” they’ve woven around the law, Beshear says that once Kentuckians find out what it really offers them, they will warm up to it. (A caller from Kentucky on C-SPAN told Beshear that Obamacare is a handout to “wetbacks” and “Muslims.”)

“By this time next year, I think there’s going to be a whole lot of Kentuckians looking at those critics and saying, ‘You mislead us, because this is a good program, and I’ve got affordable health insurance for the first time in my life.’” says Beshear. “So I think it may well have negative political ramifications for those critics who have been, for months, putting out this kind of misinformation.”

The week Kynect launched, the Republican Party of Kentucky gloated via press releases and social media about the website crashing and people having difficulty signing up. They sent out videos of news reports on the website crash, including a CNN clip of a Lexington business owner going on Kynect to find options for covering his workers, only to find an error message.

However, that business owner — Howard Stovall of Signs Now, which employs nine people — tells LEO he was able to successfully log on the following day and is very happy with what he found. While in recent years the premiums and deductibles for his employees have gone up, with coverage going down, he says that through the exchange, he was able to find options that are more affordable.

“We’re going to save 15 percent over what it would have been otherwise,” says Stovall. “And that’s before we take into account rebates and tax credits, whichever way we end up going with it. So financially, it will be better for both the employees and for me as an employer.”

Stovall says it’s understandable the website had issues with the rush of customers on the first day, and small businesses shouldn’t listen to the scare tactics over the law.

“There’s been so much misinformation,” says Stovall. “In my mind, for small businesses, it’s a win-win. You can stay where you were and don’t have to do anything, or you can take advantage of what could be some big savings for you and your employees.”

The Kentuckiana Regional Planning and Development Agency has been contracted by the state to assist Kentuckians with enrollment in Jefferson County and 15 other counties in the region. Barbara Gordon, KIPDA’s director of social services, says many people have approached the exchange with skepticism — fearing anything labeled “Obamacare” — but changed their mind once they see what it offers.

“We’ve had some who came in suspicious and some who wondered if it’s real, and (they) have been pleasantly surprised when they realize that they can actually access insurance that is affordable to them, or less than what they had researched on their own prior to going to the exchange,” says Gordon.

One particular demographic that ACA critics have said will be hurt by the law is young people, as the law’s individual mandate requires young, healthy people to purchase insurance, which will drive down insurance rates for the rest of the population.

At a KIPDA open enrollment event at Jefferson Community and Technical College on the day of Kynect’s launch, 25-year-old student Jo Ann Smith — who has been without insurance for the past seven years — expressed relief to LEO that coverage would now be available.

“Everybody wants insurance; it sucks not to have it,” said Smith. “Now I can go to the doctor. A lot of times I just won’t even go … nobody wants that bill.”

LEO spoke with two University of Louisville students who will soon turn 26 and no longer be eligible for coverage under their parents’ insurance plans, both grateful they will soon be enrolled in Medicaid.

Law school student Grace Chambers bumped into the Kynect glitches on opening day but was able to complete her application easily two days later, utilizing the website’s chat function when she needed assistance. Her mother lives in Lexington, and her plan required her to go there for providers, but once approved for Medicaid, she’ll be able to go to a doctor without an hour-and-a-half drive.

“Before the ACA, I had no idea what I was going to do,” says Chambers. “I’d either be forced to do without health insurance or pay for it with student loans. Now, I don’t have to worry about whether I’ll have health insurance next year, and that is such a weight off my shoulders.”

Katie Goldey, a U of L graduate student working a full-time unpaid clinical rotation, was going to apply for student health insurance next year, with a $160 per month premium. However, the specialist she sees for her pre-existing condition is not in the school’s insurance network, meaning she would have to pay a deductible as high as $1,000 with co-pays up to 40 percent — far too expensive for her to afford. Under Medicaid, she expects those worries to disappear.

“Our system is broken,” says Goldey. “What does it mean to have a society that says, ‘You over there, you get to live longer and feel better because you have more money or a better job’? The ACA may not be a perfect solution, but it gives people opportunity, it makes insurance more accessible for us all.”

More than 300,000 uninsured Kentuckians will now be eligible for Medicaid under the expansion, with the federal government footing the entire bill until Kentucky picks up 10 percent of the costs in 2020. According to Kentucky Health and Family Services Cabinet spokesperson Jill Midkiff, more than two-thirds of the 11,000 new enrollees with Kynect have signed up for Medicaid, the rest with a private plan.

In light of the state’s sloppy privatization of Medicaid services under the managed care system beginning in 2011 — where providers were denied payments and patients had difficulty finding providers — even ACA supporters are watching the situation closely to see if the new Medicaid enrollees will face more of the same difficulties.

Regan Hunt, executive director of Kentucky Voices for Health, is concerned that such problems might persist, but remains optimistic that the dedicated stream of federal money will boost providers.

“We’re definitely going to have to take a hard look at our current provider need, as we know we have a gap in those needing services and those able to provide those services,” says Hunt. “We’re going to be working to set up avenues to encourage more providers to accept Medicaid … and finding different avenues of providers — advanced nurse practitioners or physicians assistants, increasing the scope of their work and their practice level. We have to get creative.”

Gov. Beshear tells LEO he has “no concerns” about Kentucky’s ability to meet the Medicaid provider need, and the managed care system is now working well. He points to the study saying that 17,000 new jobs will be created with the expansion and exchange — many of which will be in the health care industry — and says similar fears about Medicare in the 1960s proved to be unwarranted.

Beshear also adds that not all of the people eligible for Medicaid “are going to sign up for Medicaid tomorrow. It will take a considerable amount of time to bring those folks into the system, and the system will compensate for it and adjust for it.”

As Kentucky braces for the challenges ahead, Beshear remains proud of the steps he’s taken this year, after a term and a half of much of his agenda dying in the Republican-controlled state Senate. Though court challenges of the constitutionality of his actions remain, most expect those to be unsuccessful and Kynect to keep on chugging, servers willing.

“I’m sure this is the single biggest decision I have made as governor in terms of its effect on the future of Kentucky,” says Beshear. “But the discussion of legacies I’ll leave to somebody else.”