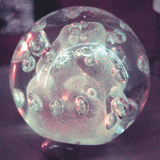 American-Chilean laptop wizard Nicolas Jaar was 21 when he released his enthusiastically received, shockingly mature debut full-length, Space Is Only Noise, by which time he had started his independent electronic label, Clown & Sunset. Now 23 and teamed with guitarist Dave Harrington to record Psychic under the moniker Darkside, the maturity exhibited by Space has blossomed into full-fledged sophistication (albeit one that sounds stoned as hell). It winds up sounding something like Massive Attack via Pink Floyd, more suited for hotboxing in a black-lit bedroom than cutting up a dance floor. Take, for instance, the mid-record banger “The Only Shrine I’ve Seen,” whose hard-hitting four-on-the-floor eventually gives way to Harrington’s throaty falsetto and David Gilmour-esque psychedelic noodling before dissipating in a cloud of reverb. Psychic is another excellent addition to an already excellent career.