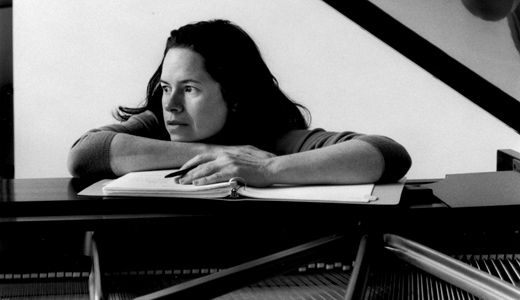 Natalie Merchant is as synonymous with the ’90s as oversized flannel shirts, “Ren & Stimpy” and gangsta rap. Need more evidence? She was outspoken in her vegetarianism, toured as part of the Lilith Fair and was BFFs with R.E.M.’s Michael Stipe. Her Tigerlily album is probably near Alanis in the stack of CDs buried in your storage unit.

Merchant will sing with the Louisville Orchestra Saturday as part of the Brown-Forman L.O. Wow! Series. It’s sure to be an evening of nostalgia, angst and perfect harmony. LEO caught up with the former 10,000 Maniac last week.

LEO: Tell me about your decision to play with orchestras.
Natalie Merchant: I started doing these shows about four years ago when I was invited by the Boston Symphony. They offered to connect me with a composer to build the repertoire. At the time I could only do half a show — now, four years later, it’s exclusively what I do, and I love it.

LEO: I can imagine it gives new life to your old standards.
NM: I don’t know, maybe I’m simple-minded, but I don’t mind playing the same songs over and over. Reinterpreting them is always fun. I think my songs have pretty good staying power, and they lend themselves to these arrangements.

LEO: Our orchestra has fell on hard times the last few years. Do you think orchestras are an important part of a city’s arts scene?
NM: They’re very important. I find that when we play a concert and it’s sold out, they are extremely grateful — especially for bringing in an audience that may or may not have ever heard the orchestra before. We just played in Birmingham, Ala. — I’m blown away by their orchestra. It’s phenomenal and is well loved by the community. I’m overwhelmed by the ability within these orchestras and the level of proficiency. And it needs to be rewarded — the smallest and largest reward is buying a ticket.

LEO: Would it be different coming onto the music scene today?
NM: Completely different. In some ways, the tools available to a young, emerging band are pretty powerful. You can do so much visually and record your own records and publicize yourself. By the same token, the dream always was to sign with a major label and then have that kind of support — and that is a harder dream to come true. When I started with 10,000 Maniacs, we were very much a do-it-yourself indie band, though we would have gone crazy for the tools available today.

Technology has done wonderful things to advance music, but there’s just no product anymore. I’m having a hard time getting my head around it, because I buy records still and I like packaging and I like to have the physical object. I understand why people don’t want all that plastic in their lives.

LEO: Do you own an iPod?
NM: I was given an iPod. I have about 200 hours of lectures on it; there’s no music. It’s embarrassing. I own hundreds of albums and hundreds of CDs, and the task of transferring all that into a digital format is so great, that’d I’d rather just go down to my basement and pull out a random one to go into rotation.

LEO: Do you embrace the nostalgia people have for your early music?
NM: I recently spoke to a gentleman who was telling me how important “Kind and Generous” was for him and his mother, who had passed away recently. I think it’s such a privilege to have written music that is useful to people in that way. When I do that song in concert, I never get tired because it’s not just a song, it’s an event. Everyone is unified in a way only music can do. There’s no other art form that unifies people that way. Everyone stands up and sings along, and they’re smiling ecstatically. I marvel at it every time.

LEO: Are you looking forward to coming back to Louisville?
NM: Yeah! The last time I played in Louisville I said on stage that I really wanted to ride a horse. And this family came up to me after the show and said they had horses. They picked me up at my hotel the next day and took me to their farm. I am terrified of horses and kind of wished I hadn’t asked. About halfway through the ride, the horse reared up on its back legs and bolted into the forest. It was horrifying.