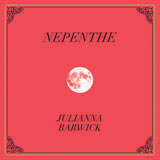 On the beautiful Nepenthe, ambient vocalist Julianna Barwick trades the introverted, lonely quality of her excellent 2011 album The Magic Place for warmth and openness. Her method of looping wordless, ethereal vocal melodies atop one another remains unchanged — and remains as hauntingly beautiful as ever — but this time around her voice, though fortunately still the record’s most prominent timbre, is bolstered by sparse instrumental flourishes provided by Múm guitarist Róbert Sturla Reynisson and string quartet Amiina. The album’s single “One Half” features the album’s only discernable lyrics and is the closest Barwick has come to pop music; mid-album stunner “Pyrrhic” is shimmering, revelatory and sublime. Nepenthe is a gorgeous, affecting and inviting album that, contrary to its title — a drug that inspires forgetfulness, mentioned in ancient Greek literature — is unlikely to be forgotten.