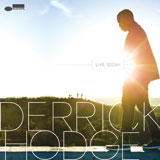 While the name may not sound alarms, his bass notes are likely already in your collection. From backing up both Maxwell and Jill Scott, setting foundations for Common and playing anchor to the Robert Glasper Experiment, Hodge’s solo debut is a stellar coming-out party. Live Today features all the Experiment players while still maintaining a unique, if familiar, identity. There’s a playfulness in Hodge’s compositions, best shown in “Table Jawn,” whose basic track was recorded on an iPhone with Hodge, Glasper and drummer Chris Dave grabbing whatever they could find to jam at Hodge’s breakfast table. Less expected are the gorgeous vocals of fellow bassist Alan Hampton on “Holding on to You,” a potential crossover for the NPR set. Don’t be surprised by another long walk up to the Grammy stage for Hodge and crew next year.