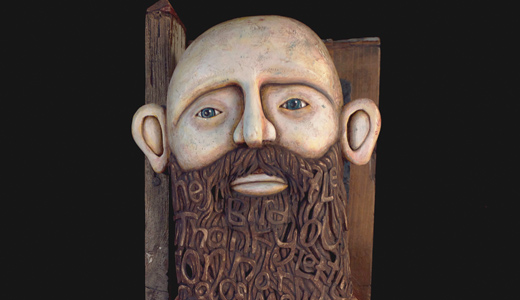 "No Bad News" by Kevin Titzer

Sculptor Kevin Titzer lives in Saguenay, in the Canadian province of Quebec. “Gotta live somewhere,” he laughs. Geography and movement aren’t usually themes in the Evansville, Ind. native’s work, but his ongoing series of shows focused on interpreting music through visual art has led him all over the continent.

His new group show, inspired by the 20-plus years of Louisville native Will Oldham’s work in and around music, features four native artists (two who still live in Louisville) and almost two-dozen others from various locations. It’s the third show of its kind curated by Titzer. The first, in Seattle, paid tribute to They Might Be Giants in 2005. The second, on the Pixies, was seen in Venice, Calif., in 2011.

It wasn’t planned as a traveling showcase. Titzer created the first show while he was still living in Evansville, showing it in a Seattle gallery because they were showing other works by Titzer at the time. “I pretty much didn’t know what I was doing the first go-around,” he says.

The Pixies show was even more of a challenge. “Doing it long distance, it was a really tough show to get through,” he says. “So this time I felt, ‘I want to do something a little closer to where I’m from.’” By the time it starting coming together, however, he had moved to another country.

Titzer decided on Will Oldham as the subject. “At the end of the Pixies thing, I felt, like, ‘Oh, I’ve done my big commercial’ — not that the Pixies are that big and commercial — but, ‘I want to do my underground show. A little low-key show.’”

His plans shifted again, and “Troublesome Houses” (named for a 2010 song Oldham recorded as Bonnie “Prince” Billy) grew into a big project featuring artists from Portland, Ore., to Hamburg, Germany.

Titzer has been a fan since first hearing Oldham’s Palace Brothers, going back as far as Oldham’s early music days in the ’90s. A number of Louisville musicians attended the University of Evansville back then, he says, including the Watson Twins, and cross-pollinations between musicians and artists from the two cities influenced people in both places. It was one of the last pre-Internet exchanges of its type.

“I feel really old,” laughs the 41-year-old. (Oldham is now 43, and LEO was born two years before Oldham’s first record was released.) “Obviously, I’m biased in feeling nostalgic about that time, but it was harder to discover things,” says Titzer. “We got the job done by word-of-mouth, or zines … I think you appreciate it more when you have to do a little bit of research, not just a Google search.”

As Oldham’s career progressed, artistically and commercially, Titzer felt inspired by seeing his peer thrive. He says more than once that, despite not actually being from Louisville, he feels an affinity with the place and its people. As an artist from Evansville, “I can relate (to Oldham). If a guy from Louisville can go at it and be successful, and, on top of that, do it all on his own terms — which has always been impressive — then I can at least get off my ass and keep moving.”

Titzer has been getting off his ass for 15 years now. The contemporary art magazine Juxtapoz wrote, “Kevin Titzer makes some amazingly bizarre sculptures, the kinds that make you feel uncomfortable and inspired at the same time,” and the first gallery to exhibit his work was Louisville’s Images Friedman. He says he listens to a lot of music while working in his studio, often using its inspiration to fuel his own creativity. One of the artists included in this show is Jon Langford, a prolific visual artist and musician best known for leading the band the Mekons. Oldham wrote a song dedicated to that band at the beginning of his career.

Titzer has not met Oldham but says Oldham has approved the tribute. Titzer laughs when asked if he wants to meet its inspiration, and notes how awkward meeting a well-known figure can be when they don’t know anything about you. “He seems like a really nice guy … More than anything, I hope he sees the show and likes the artwork.”