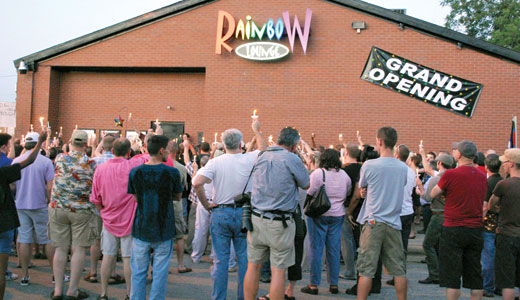 If I told you there was a new documentary about an awful police-led raid of a gay bar, you’d probably place it somewhere in the ’50s or ’60s — maybe even the ’70s or early ’80s. Perhaps you would think of the Stonewall Rebellion that took place in New York in 1969, which is flagged to be the launch of our modern gay rights movement.

Unfortunately, the recently released “Raid of the Rainbow Lounge” is a look at a brutal and unjust incident that took place exactly 40 years after Stonewall — to the day — in Fort Worth, Texas. On June 28, 2009, police and agents from the Texas Alcoholic Beverage Commission (TABC) raided the newly opened Rainbow Lounge in Fort Worth, which resulted in injuries (one serious), unlawful arrests and bad blood between the LGBT community in the small town and its government.

On one side, you had the LGBT community demanding answers as to why the police brutally manhandled and intimidated patrons, why there was a need for a raid in the first place and what government officials were going to do to rectify the situation. On the other side, the accused officers reported they were harassed, fondled and even grabbed by bar patrons, and thus had no other option but to use force. The Fort Worth police chief defended the officers’ actions and made public remarks and allegations many considered homophobic.

The documentary is narrated by activist and actor Meredith Baxter and is told through interviews with those who witnessed the incident firsthand and those who led a grassroots movement to affect change in the Texas town. The LGBT community in Fort Worth did not stay quiet after all was said and done, and the many positive changes that occurred in that community makes it one of today’s leading cities in LGBT equality. In the wake of the raid, the city instituted mandatory diversity training for all city employees, revised their bar-check policy, expanded the city’s anti-discrimination ordinance to include the transgender community, and began offering domestic partner benefits to city employees.

“Raid of the Rainbow Lounge” is an important piece of evidence that proves we’ve come a long way but still have miles to go. “I think it’s important for people to realize that events like what happened at the Rainbow Lounge are still happening in our lifetime,” says director Robert L. Camina. “Hopefully, through education, we can prevent events like this from happening again, and Fort Worth’s story can serve as a successful model for grassroots development.”

The screening of “Raid of the Rainbow Lounge” is Oct. 19 at 2:55 p.m. at Village 8 Theatres. It’s part of the Louisville LGBT Film Festival, which takes place Oct. 18-20. For more info on the festival, go to louisvillelgbtfilmfest.com.

‘Raid of the Rainbow Lounge’
Documentary directed by Robert L. Camina. Narrated by Meredith Baxter. UR; 1:43. LEO Report Card: B+