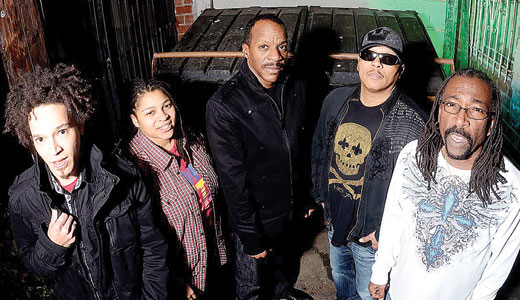 Many people can do an impression of Aaron Neville, the great soul, funk and pop singer. His son Ivan is one of them. But Ivan, now 54, long ago proved himself to be his own man, playing keyboards solo and for Keith Richards’ X-Pensive Winos, Bonnie Raitt, The Neville Brothers and even the Spin Doctors (just being a New Orleans Neville isn’t enough to pay the bills).

For the past decade, he’s led Dumpstaphunk, a lively band whose funk thrust simultaneously takes listeners back to the genre’s glory days in the 1960s and ’70s and moves the form into the future. The multi-generational band also includes Ivan’s cousin Ian Neville on guitar, drummer Nikki Glaspie and two bassists, Nick Daniels and Tony Hall. Inspired by Sly & the Family Stone and Parliament, able and willing to play all styles, Dumpstaphunk fuses funk, soul, rock and distinctively New Orleans rhythms into a crowd-pleasing smorgasbord.

Despite the fun unavoidable in their sound, Neville and band like to sing about issues at times — some of their new songs include “They Don’t Care” and one named after that most sensitive of New Orleans topics: “Water.”

Dumpstaphunk is a party band, he says, but some of their songs say a little something. “When people come to see us, they’re coming to have a good time, and then here and there we sneak a little message in. We’re trying to please you; we’re not trying to shove any opinion down anyone’s throat. When you have a chance to say something positive, or something that we feel needs to be said, we have the tendency to say it.”

How’s New Orleans been lately? “It’s cool. It’s still coming around,” Neville says. “People are coming down here, they’re bringing their business down here, the tourist thing is doing well … our football team is just crushing! (laughs). I’m very happy about that. New Orleans is doing good; we have a lot to be happy about.” They also have the best food in the world and the best music in the world, he adds.

Can music help people? “Oh, absolutely,” Neville says, “in many different ways. It helps people to heal from certain things that are going on in their lives. It helps people to sometimes get away from otherwise stressful things going on. Music is not only an escape but it is a healing tool, as well. Music is definitely good for the soul.”

Dumpstaphunk has taken their music to many festivals and jam-band gatherings, playing to all sorts of adventurous crowds, but nothing had prepared them for their latest adventure: opening for Lionel Richie. “Um, it’s a different crowd for us,” Neville says. “It’s not, you know, who we often see, but it’s good to play for an audience that may not be there to see your band. It’s good to be exposed to a … a vastly different audience.”

Again, bills have to be paid.

The members of the band range from early 30s to mid-50s, and drummer Glaspie is the newest member, having joined two years ago. The Berklee grad had previously played in Beyoncé’s all-female band and met Neville through another funky band she had played with, Soulive. Glaspie had been making annual trips to New Orleans’ Jazz Fest, meeting Neville in 2004 when Dumpstaphunk was just beginning and not even a full-time band yet.

“She can hang with the best of them,” her new boss says with a hearty laugh. “We don’t have to curb our behavior that much. As far as we’re concerned, she holds her own. The beautiful thing is that we do have a female perspective, and that’s a cool thing — also, the voice! We’ve got a female voice, and she’s a badass drummer, so all that wrapped up is a beautiful thing.”

That female aspect was important to the band, whose primary inspirations — Sly Stone, George Clinton — had incorporated multiple singers of all types in their family-style music.

Dumpstaphunk’s latest and second full-length album is called Dirty Word, so I asked Neville what the dirty word of the day was. He laughed and replied, “Funk!”