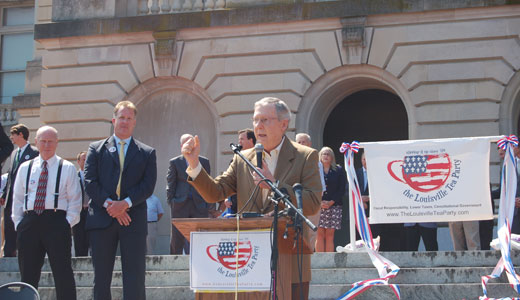 The 17-day standoff that shut down the federal government finally gave way and ended last Wednesday, along with a deal that lifted the nation’s debt ceiling just hours shy of the deadline, narrowly averting not just America defaulting on its debt, but also a global economic catastrophe.

After a notable absence from the partisan fight – except for a handful of speeches and interviews blaming Democrats for the standoff – a familiar face emerged at the last second on the deal: Senate minority leader Mitch McConnell.

Just as he had during the debt ceiling crisis of 2011 and fiscal cliff crisis last December, McConnell helped craft the last-minute deal with Senate Democrats to end the shutdown and raise the debt ceiling. But unlike those past crises, in which he was able to gain major concessions from Democrats, Republicans won virtually nothing from the deal, ultimately surrendering to Democrats unwilling to cave on a long list of policy demands — most notably a gutting of the Affordable Care Act — and punting the debate forward for a few months.

Following the deal, McConnell faced the full wrath of the Tea Party and far right-wing for selling out the cause of Sen. Ted Cruz to hold firm on “Obamacare,” but portrayed himself in his subsequent media tour as the adult in the room, willing to shun their foolish quest and make a deal for the good of the country.

While McConnell’s claim is somewhat questionable considering his actions over the three weeks of crisis, the results of the standoff are now clear: His party has taken a beating, with polls showing that voters blame the GOP for the shutdown and congressional Republicans at all time low approval ratings.

Now McConnell, his party and Democrats all brace and position themselves for the next fight ahead early next year, as the public wonders whether the dysfunction of Washington will return once again.

On McConnell’s media tour with national and local press following the deal, he characterized the crusade of Cruz and Tea Party Republicans in the House to shutdown the government over Obamacare as “a quixotic venture that had no chance of success” due to the firm Democratic majority in the Senate. McConnell added he had learned his lesson from the Republican-engineered shutdown of 1995, saying, “There’s no education in the second kick of a mule.”

While reports in September showed he didn’t favor such a fight privately in his Republican caucus, McConnell’s public rhetoric on the matter was quite different.

In a Newsmax interview before the shutdown, McConnell said of Republicans’ defunding cause, “I don’t think it was a waste of time.” After the House refused to allow a vote on a budget bill without measures gutting Obamacare — beginning the shutdown — McConnell told WHAS-AM that the House “has been very reasonable here in trying to get the Senate to at least engage in some adjustments to this Obamacare train wreck.”

In the second week of the shutdown, McConnell went to the Senate floor and continued to blame not his fellow Republican hardliners, but Senate Democrats for not giving in to their demands. Throughout this time, many of McConnell’s fellow Senate Republicans openly questioned the tactics of Cruz and his House allies, complaining that McConnell was not providing enough leadership, refraining from reining them in. But McConnell, even as late as early last week, was prodding House Speaker John Boehner to pass another bill with Obamacare concessions, hoping to get additional leverage over Democrats.

With the debt-ceiling deadline looming last week, McConnell finally saw the writing on the wall, convincing House speaker John Boehner to defy his Republican caucus and allow a vote on a Senate bill in which their party surrendered. As McConnell said following the 2011 debt ceiling crisis, “the default issue (is) a hostage that’s worth ransoming” – but there would be no ransom this time.

While many commended McConnell for his bravery on the deal — noting his GOP primary challenger back home, Matt Bevin, would surely pounce on him for it — there was certainly self-preservation at play, as well. Leading up to the deal, polls showed voters not only blaming Republicans for the shutdown, but the party’s approval dropping to a record low. Prominent business leaders – McConnell’s primary donor base – also began to criticize Republicans for flirting with default. Faced with such a possible revolt – and the prospect of Republican Senate candidates’ election chances being doomed next year, along with McConnell’s lifelong goal of being Senate majority leader – he had little choice in the matter.

The government shutdown ultimately caused a $24 billion hit to the economy, and while averting default has put the market at ease, subsequent polls have shown approval ratings for both the Republican Party and Tea Party continuing to crater to record lows.

The Kentucky Chamber of Commerce sent a letter to McConnell praising his leadership in ending the standoff, and national business groups are now flirting with the ideas of entering Republican primaries next year to defend the likes of McConnell from Tea Party challengers.

However, Tea Party figures nationally — with the notable exception of his strategic ally, Rand Paul — have piled on McConnell as public enemy No. 1. The Senate Conservatives Fund — a big-spending Tea Party PAC — made their official endorsement of Bevin, with radio conspiracy theorist Glenn Beck joining Bevin’s cause. Even Sarah Palin hinted that she will soon jump into Kentucky’s fray to help his effort against McConnell.

Tea Party groups also pounced on a last-minute addition to the McConnell-Reid deal that potentially added $2 billion to one of McConnell’s longtime pet projects: the Olmsted Lock and Dam on the Ohio River. Though they characterized this as the “Kentucky Kickback,” McConnell later insisted that while he supports the project, he had nothing to do with its insertion.

McConnell pivoted away from such attacks, focusing his energy on his Democratic opponent next year, Alison Lundergan Grimes, saying her campaign theme — that McConnell is an obstructionist — was rendered moot by his leadership in the compromise.

Grimes’ campaign spokesperson fired back on Twitter, writing, “Senator Gridlock is like an arsonist who lights the fire and then claims credit for helping put it out.”

“I suppose that we should be thankful that after about three months of being missing in action, (McConnell) has surfaced here in the last couple of days and is helping some deal out,” said Beshear. “A firefighter shouldn’t be getting credit for helping put out a fire when he helped start the fire.”

Rep. John Yarmuth joined the chorus pushing back against McConnell’s interpretation of events, telling LEO, “I think if you want to give somebody credit for cleaning up the mess that he helped to create, then yes, you can give him credit for cleaning up his own mess. But he could have played a major leadership role in avoiding this disruption, and he didn’t.”

Though Congress eventually found its way out of the crisis, it may return again soon, as the debt ceiling approaches Feb. 7 and the next budget bill on Jan. 15. While Cruz is once again signaling a fight over Obamacare, McConnell is expressing confidence that his party will not go down that road again.

On Sunday, Democratic Senator Chuck Schumer talked up what he called the “McConnell Rule” to avoid a similar threat of default, citing McConnell’s short-lived proposal in 2011 to make it easier for President Obama to raise the debt ceiling – though McConnell likely doesn’t appreciate the label from his longtime enemy.

Rep. John Yarmuth tells LEO he is optimistic that Republican leadership will hold the Tea Party caucus in line, avoiding another manufactured crisis over Obamacare, but is hopeful that Democrats will be able to lift the sequestration cuts, which remain in effect.

For his part, McConnell wants the coming fight to be over cutting entitlement benefits of Social Security and Medicare, signaling that tax increases will be off the table and sequestration cuts should stay in place.

In an interview this week, Senate Majority Leader Harry Reid said that he and Obama decided this summer they would not cave in to the demands of “crazy people” in the Tea Party caucus in what became the shutdown and debt ceiling fight. They stuck together and won their fight, but if the likes of Ted Cruz rise again, we’ll see if Mitch McConnell is more prompt in doing the same.