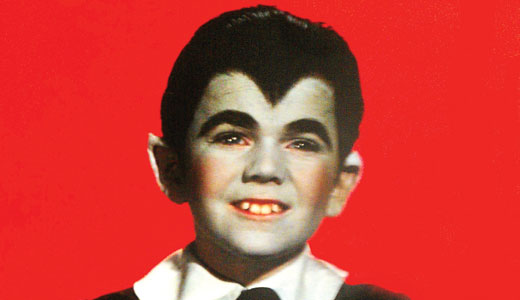 If you see the Munstermobile drive by this week, it’s not a coincidence; Butch Patrick, best known as TV’s Eddie Munster, will be the grand marshal of Friday’s Caufield’s Halloween Parade (Oct. 11, 7 p.m.). The 10th annual event carries on the tradition of scary but family-oriented Halloween fun — not unlike the TV show “The Munsters,” on which Patrick starred in the 1960s.

“We’re pleased to have Eddie as Grand Marshal this year,” says Kerry Caufield of Caufield’s. “It’s a perfect fit and a great way to celebrate” the parade and the city’s Halloween tradition.

The parade began with just 30 units and has grown over the years to 80-plus, ranging from elaborate floats and costumed groups to family groups walking with pets. (Again, the emphasis is on fun rather than scary.)

Patrick took a few minutes to answer some questions by email this week.

LEO: Eddie Munster is still an icon to a generation of people who grew up in the 1960s and ’70s. What’s it like to be so indelibly associated with such a recognizable character after all these years?
Butch Patrick: Pretty amazing, as everyone loves the show.

LEO: What was it like being on set?
BP: There was always something fun happening.

LEO: Do you have a favorite behind-the-scenes Munsters story?
BP: Not really. Lots of exploring the Universal lot and befriending stars on other shows (like) “McHale’s Navy,” “Wagon Train,” etc.

LEO: While you are best known for your portrayal of Eddie Munster, you actually appeared in many films and TV shows, including one of my childhood favorites, “Lidsville.” What was your most rewarding acting experience?
BP: Probably working on “The Young Loner” at Disney and, for fun, “The Monkees’ Christmas Show.” Also, Chuck Jones’ “The Phantom Tollbooth.”

LEO: You’ll be the grand marshal of this weekend’s Caufield’s Halloween Parade. What’s the most enjoyable aspect of these kinds of events?
BP: Just the fan appreciation and the warmth that cities bestow upon me.

LEO: Growing up, I learned there are two types of people: Those who prefer “The Munsters,” and those who prefer “The Addams Family.” Assuming you’re among the former, why do you think “The Munsters” was better?
BP: I often say the easiest way to tell the difference between the two is they were monsters that looked like people, while we were people who looked like monsters. We were warm, and they were dark and morbid.

LEO: Who do you think would have won in a fight between Eddie Munster and Pugsley Addams?
BP: Me — I’m quicker and more agile!

LEO: Since to the world you are Eddie Munster, tell me this: What did the character grow up to be?
BP: A car customizer and haunter.

LEO: Do you still have Eddie Munster’s toy companion Woof-Woof? If not, do you have any idea where it is? Because if I ever see it on eBay, it’s mine.
BP: No. I had him; I made 93 to sell from the original. He’s now with a private colector in Indiana. He sold for a lot.