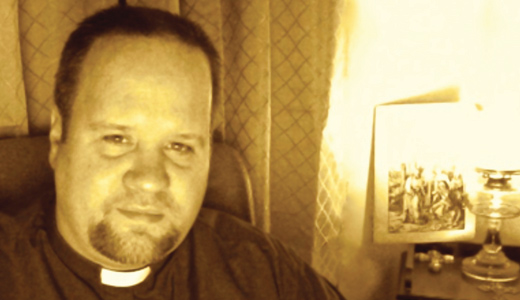 Bishop James Long is a man of God. A man of deep faith. He is also an exorcist. Yes, you read that right — a real life exorcist. His branch of Catholicism (The United States Old Catholic Church), due to some practices, has been controversial and often contentious to the Vatican loyal, but it seemingly has few (if any) theological discrepancies. Besides presiding over the congregation at St. Christopher’s Old Catholic Church (1838 Bardstown Road), he is often called in to cast out spirits when need be. He has been featured on the Travel Channel’s “Ghost Adventures” and is the author of the book “Through the Eyes of an Exorcist.” He took a few minutes to chat with LEO about his experiences with the dark side.

LEO: Please explain to me what the church defines as an exorcism.
Bishop James Long: Understand there are two types of exorcisms. You have the Minor Rite of Exorcism that was actually published by Pope Leo (XIII) for the purpose of exorcism against Satan and various angels who have infected themselves within a home. So that is “Infestation.” Basically, a priest comes in, says a blessing and expels the demonic entity. Then there is the Solemn Rite of Exorcism, which is a prayer ritual that is performed on an individual who is possessed by a demonic entity.

LEO: Is the process always the same or does it vary from case to case?
BJL: The process is always the same regarding the Solemn Rite, always … under no circumstance do you deviate from the process. Meaning, the person must have a psychological evaluation first. There is no other option; they have to have it. If there is already a mental condition there, an exorcism can often exacerbate it, and they could harm themselves. Also, the body can only withstand so much, so there needs to be someone present monitoring their vitals.

LEO: So the process can be dangerous?
BJL: The person could die. There are two types of possession — transient and whole. When you have transient possession, that’s when the entity enters and leaves the body at will. There’s a very famous case — Anneliese Michel (inspiration for the film “The Exorcism of Emily Rose”) — her state was transient possession.

Whole possession is where it never leaves the body, remains in control of the body at all times, attacking them in a spiritual, psychological and sexual nature. And that’s very dangerous, because a person could expire very easily. At that point, the basics of life, like food and water, are difficult to place within the body because the demonic entity is effectively trying to destroy the body it possesses. Anneliese Michel was 78 pounds when she died.

LEO: Are certain people more susceptible to possession than others?
BJL: Understand, possession is very, very, rare. Even demonic infestation is very rare. There are some people who like to believe it’s rampant, and it’s simply not. So it’s incredibly rare for someone to be possessed. Does it happen? Absolutely, no question about that. As far as people being susceptible to it, if you’re out provoking, you have to understand that you might get a response. And when you get that response, the consequence can be severe.

LEO: Is the film “The Exorcist” accurate?
BJL: The head spinning is nonsense, but the regurgitating can be very real. I’ve never seen anything levitate personally, but many priests have claimed to see things lift off the ground.

LEO: What’s the most terrified you’ve ever been at something like this?
BJL: Not so much terrified, more concern for the individual. I had a case with a 68-year-old woman, and she kept screaming that it was attacking her in a sexual nature. She was a wonderful, wonderful person, but when I got involved, literally both orifices were ripped apart in her private region. So obviously she was horrified; it was a terrible situation for her — so emotionally (it) was very draining for me to watch her go through that.

LEO: Would you consider the Ouija Board dangerous or just a children’s toy?
BJL: The Ouija Board is absolutely horrific. It makes no sense for people to play with it. The intent is to communicate with an entity whose essence you have no idea about. So you don’t know who you’re speaking to, or what you’re speaking to, and it makes no sense to me why paranormal investigators do this. We always tell kids, “Never talk to strangers” — the same is true with spirits.