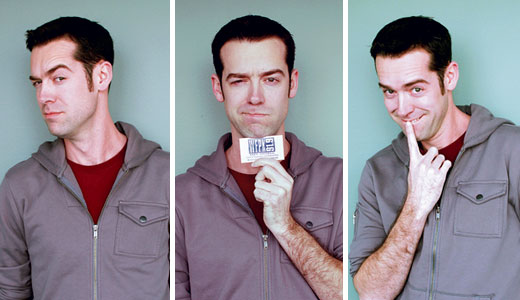 I love you, Louisville

The first Louisville Music Awards took place last week, allowing some of the best Derby City has to offer a chance to congregate in one room. I had the honor of being able to witness it all, and to host it as well. If you’ve seen only one awards show, you know that for the host, it’s all about that opening monologue. For me, it was an opportunity to reflect on the city I’ve fallen completely in love with and on some of the folks who have made it so special. While I didn’t launch with a catchy song-and-dance, or recreate Miley’s twerking scene with Mayor Fischer, I did have a love letter in mind, and what better opportunity to share it than with like-minded folks who were all there to celebrate?

I really am sincere in the belief that we have some of the greatest music in the world, from some of the greatest bands, in the greatest city on the planet. Think about what exists here: Did you know, according to Wikipedia, that we invented the high-five? It’s credited to the 1978-79 Cards. Did you know something like 80 percent of the world’s disco balls are made here? And, of course, our most famous drink. I’m not saying we export everything that makes a great party — just the ingredients for the greatest party.

Maybe celebrities impress you. Jennifer Lawrence, Jennifer Carpenter, Hunter S. Thompson, Gus Van Sant, Diane Sawyer and Sue Grafton. Tom Cruise did some high-schooling here, and The Colonel himself made sure he’d spend all of afterlife in Cave Hill. I’m not saying we make every celebrity, just the greatest ones.

How about sports? We went to the big game in basketball, football and baseball. Heck, the most famous bat, the Louisville Slugger, is here. Rick Pitino and Denny Crum are our Hall of Fame coaches. The Kentucky Derby is actually called “The most exciting two minutes in sports.” Oh yeah, and then there’s Muhammad Ali! Maybe we don’t make every sports star, but when we do, it’s the greatest of all time.

It’s a town that let J.K. McKnight grow a small concert from the confines of Tyler Park to become the Forecastle Festival, one of the Midwest’s premier summer destinations. It’s a place that allowed John Timmons to open a little record shop, almost 30 years ago, which went on to be one of the most influential stops in the country. There’s not a day that goes by that you don’t see an ear X-tacy sticker still plastered proudly on the back of a car.

Speaking of cars, let’s not forget that your Ford truck is built here. And as far as corporate giants go, Papa John’s and Pizza Hut, Taco Bell and KFC call Louisville home. Yum! Brands alone makes up the world’s largest fast food company. Brown-Forman doesn’t just supply the world with the greatest bourbons on Earth, but Tennessee’s prized Jack Daniel’s, too. It’s not a stretch to think most of our musicians have that brown liquor to thank for their most well-known songs, for better or worse.

Which brings us back to the Louisville Music Awards. Congrats to Wax Fang, who picked up the Song of the Year. “The Blonde Leading the Blonde” is a mammoth of a tune and one of the most original tracks written this year, not just in our fair metropolis, but of any I’ve heard.

That’s not to say the other songs in the same category, or for that matter any of the finalists in their own respective groups, don’t rise to those same levels. As the music director of WFPK, I get to listen to a lot of music, and while there is never a drought of good choices, they never compare with what’s in our own backyard. Go ahead, blast “One Big Holiday.” Belt out “Sunshine Baby.” Throw your arm around a buddy as you drunkenly slur the words to “My Old Kentucky Home.” And take pride in every word.