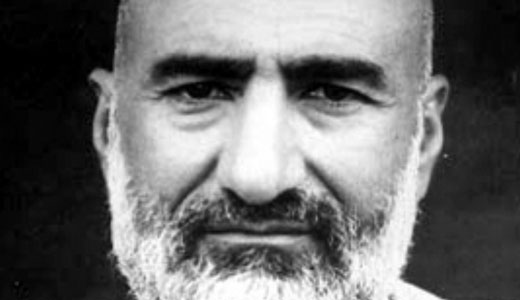 He preached nonviolence in a region characterized as anything but. He spent nearly a third of his life in prison for doing so. His death in 1988 at age 98 opened the border between feuding nations and brought together an estimated 300,000 people, including political leaders. Mahatma Gandhi, his better-publicized contemporary, admired his work and publicly praised his ability to mobilize 1,500 nonviolent soldiers. Yet, few seem to know much about the Pathan named Khan Abdul Ghaffar Khan.

On a sunny Saturday afternoon, inside a rec room at the Bon Air Library, Khan Abdul Ghaffar Khan’s granddaughter changes that for a modest group. Dr. Gulalai Wali Khan begins her lecture — subtitled “Nonviolent Soldier of Islam” — with theories on why her grandfather’s legacy is relatively unknown. The first: Many aren’t familiar at all with the Pathan people of Afghanistan and Pakistan. Those who are often view them as violent extremists, and a Muslim man who promoted peace and social reform doesn’t back up that narrative.

Even many who acknowledge his positive message believe it sprang from the teachings of Gandhi. Dr. Khan says that while the diminutive leader was undeniably influential to her grandfather, the peaceful approach predated their interactions together: “He was asked once, ‘So, you learned nonviolence from Gandhi?’ He replied, ‘No; I learned nonviolence from the Koran. The only one I saw practicing it was Gandhi, a Hindu.”

Dr. Khan’s lecture was one event in the library’s “Muslim Journeys” series, which spans the month of October. The series of lectures, cultural showcases and film screenings complements new materials the library received as part of a National Endowment for the Humanities grant of the same name. The materials are comprised of books, DVDs and free access to the Oxford Islamic Studies Online, a normally pricey database of scholarly writing on the Islamic world.

The series is being held at the Bon Air branch in part because librarian Sophie Maier, who’s traditionally worked out of the Iroquois library, wanted to build off its existing cultural programming and further embrace a surrounding neighborhood that appears to be increasingly diverse.

The neighborhoods around the Bon Air library are home to various religious institutions, cultural centers and ethnic restaurants. While that isn’t hard data, Maier says anecdotally it seems like many immigrants have settled in the area. The refugee population in Louisville is larger than in cities of comparable size, due to resettlement programs like the Kentucky Refugee Ministries and Catholic Charities of Louisville. They come from countries as diverse as Syria, Congo, Bhutan, Burma, Afghanistan and Iran.

Bridging cultural gaps between these minorities and the community at large through educational and cultural events is key to creating a harmonious melting pot.

An earlier installment of the “Muslim Journeys” series brought together middle-school students from the Adelante Hispanic Achievers program for a film screening of the documentary “Koran by Heart.” Afterward, the preteens were able to write down whatever cultural questions they had, and an Indiana University Southeast professor answered them. Another was designed for social workers, counselors and others who might interact with Muslim families. Both events are teachable moments for locals interested in learning about a new culture.

“It’s also empowering to the community (being featured),” says Maier, speaking not just of “Muslim Journeys” but also of the library’s wealth of cultural programming. “It’s retaining their cultural heritage and transmitting a sense of pride.”

Maier says she’s also noticed that when the presenters, many of whom aren’t professional speakers or normally in the public eye, give lectures, they bring their children and seem to be talking indirectly to them. As their children become more engrained in American culture, holding onto their heritage is important.

Honor is a concept of the Eastern world, says Dr. Khan while explaining the culture of the Pathan during her lecture. That can breed hatred and groups like the Taliban. It can also spark deep resolve for the common good of mankind. Khan Abdul Ghaffar Khan believed in the latter.

“He was the oppressor,” says Dr. Khan. “He was in a good caste. He chose to bend down. He stepped out of his class.”

He believed in promoting education for girls, something many didn’t condone. His reasoning, says Dr. Khan, was that if you educated a girl, you were educating a whole family, not just a singular person. He built schools in many villages where they were destroyed by enemies and rebuilt again. He spoke of the greater and lesser jihads, the former being an interior battle of self-discipline, patience and kindness.

“How many of us have the strength not to retaliate when someone wrongs us? People wrongly believe nonviolence is passive,” she says. “It’s not. It’s active.”

Unfortunately, the nonviolence movement in the northwest frontier died with Khan Abdul Ghaffar Khan in 1988, at least according to his granddaughter. She wishes his messages were better preserved. A Canadian-made documentary about her grandfather may help. It’s currently making the rounds at regional film festivals after more than two decades of being worked on. Maier hopes to bring it to Louisville. Dr. Khan, who showed clips from the documentary, hopes so, too.

“Everything we teach our children is of violence,” says Dr. Khan. “What do we expect them to make of it?”