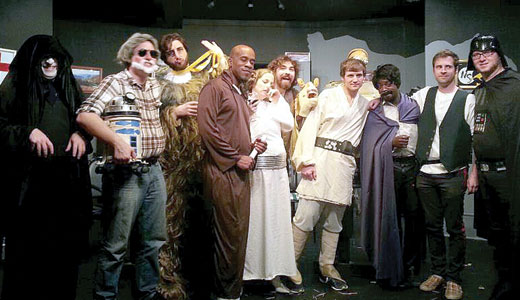 As is the case with at least one other epic tale, the story of how “The Roasts” came to be begins with Jesus.

“In December of 2011, I got a text from Will Hardesty,” Raanan Hershberg recalls, reflecting as he approaches the two-year anniversary of what has become one of the most popular comedy shows in the city: Young, Dumb and Full of Comedy’s series of ongoing celebrity roasts. “The text just said, ‘Let’s roast Jesus for Christmas.’ I thought he was kidding or being sarcastic, but as it turned out, he wasn’t. So I, of course, agreed. People think this was my idea, but Will Hardesty came up with the whole thing. He’s just not really interested in running it.”

That first show took place on Dec. 23, 2011, and it sold out quickly. The upstairs theater at The Bard’s Town was packed in tight, hot with body heat, a stuffy juxtaposition to the bitter cold night outside that was just starting to get a dusting of snow as the show began.

“We only had two characters in the first one: The Marys — the Virgin and otherwise. The rest of the dais was just local comedians performing as themselves,” Hershberg says.

After the Jesus show went off so well, the comics realized there was a local circuit of like-minded individuals who enjoyed their specific brand of edgy comedy. What followed was a roast of Abraham Lincoln for President’s Day and a roast of Hitler in April (around his birthday). “I thought it was funny,” Hershberg laughs. “When we did the roast of Lincoln, people got more offended by Lincoln jokes than they did about Jesus jokes. That surprised me. But maybe it’s because Lincoln was a real person, I don’t know.”

The Hitler roast ended up being a turning point for the show. “We realized with that one that having comedians be comedians on dais didn’t work as well. They were all friends, and when you have friends on stage together, it ends up being a lot of inside jokes. And we noticed the audience was responding a lot more to the character-based humor, so that became a big lesson learned for us.”

Now every comedian on stage has to be in character, writing jokes from the perspective of whoever they’re playing. They’ve since gone on to soil the reputations of iconic pop-culture figures like Shakespeare, John Lennon, Dorothy from “The Wizard of Oz” and Mario of “Super Mario Brothers” fame. This weekend, in honor of Halloween, the roast crew returns with “The Roast of Freddy Kruger” featuring Count Dracula, Carrie, Chucky and “The Black Guy From Every Horror Movie Ever.”

“Not to discount what they do on Comedy Central,” Hershberg says, “because they are some of the greatest writers in the world — I’m not comparing us to them in any way. But I think what we do is harder. We have to create a character and then not write jokes from our perspective, which is what they do and what we’re trained to do as comics. But we have to write jokes from the perspective of the character we create, and how they would feel about the person we’re roasting, which, I think, creatively, presents us each with a really interesting challenge.”