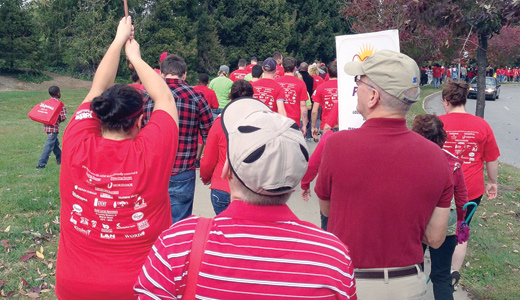 Before the march, the group was nervous. The man holding the flag feared he might get shot. Others worried there would be counter-protesters who might get physical. It was June 27, 1987. More than 300 people had gathered downtown for Louisville’s first gay-rights march. At the time, the city had no hate-crime ordinance protecting gays and lesbians. The local campaign to pass the Fairness Ordinance, which bans discrimination based on sexual preference or identity, hadn’t been formally launched yet (and it wouldn’t pass for more than a decade). Homophobia and homohysteria surged amid the terror of the ongoing AIDS epidemic.

Jane Hope was among those marching.

Looking back now, she laughs. Forget counter-protests and tomato throwing. June 27 fell on a Saturday, meaning there weren’t many people downtown to see their political statement. Still, that inaugural March for Justice mattered. It helped usher in Jefferson County’s equal-rights ordinances and eventually morphed into what is now known as the Pride Festival. It’s also where Hope saw the sign. It read: “I love my gay daughter,” and Hope was in awe.

One of Hope’s sons had come out four years earlier. Since then, she’d read every book she could find for straight parents with gay children. At the same time, she’d refused to buy the books locally out of fear somebody who knew her would recognize her and assume the truth.

At the march, Hope connected with Suzanne Vance (the one with the sign) and Marie Jenkins, another local mother with a gay son. Together, the three women decided they should start a group for people like them. Hope had been attending meetings of the local chapter of Integrity, a group for LGBT Episcopalians and their allies, but didn’t know of a local group specifically for straight family members who wanted to connect and support the cause. After reading about the organization in a Dear Abby column and attending its national conference in Washington, D.C., the women decided to create an affiliate of an established organization called Parents, Families and Friends of Lesbians and Gays, or PFLAG, rather than reinvent the ally wheel.

The average age for coming out was 25 in 1991. By 2010, that average dropped to 16. While declaring your sexual preference to family, friends and the world can still be nerve-wracking and have devastating consequences, as a whole, gay and lesbian acceptance has become mainstream in the United States. There are openly gay elected officials, athletes, musicians and mainstream news anchors. Public universities, including the University of Louisville, have LGBT-specific housing and dedicated resource centers on campus.

In May, a Pew Research Center poll found that 50 percent of Americans favored same-sex marriage, while 43 percent opposed. Fourteen states have already legalized it, and others are expected to follow suit. Even conservative strongholds are seeing challenges. Small towns like Vicco, Ky., have passed Fairness Ordinances. On a larger scale, shortly after the overturning of the Defense of Marriage Act (DOMA) by the Supreme Court, Kentucky saw its first federal lawsuit filed challenging the state constitution’s ban on same-sex marriages.

All this change makes Hope wonder whether PFLAG is as necessary today as it was when she helped found it. She’s not alone with her doubts.

When her son came out, Hope only knew one family with a gay son, so she quickly and quietly rushed to them for advice. These days, how many people can still say that? Those rare folks who can, along with those too embarrassed or ashamed to converse with people in person, can turn to the Internet for a wealth of resources from groups like PFLAG or the Human Rights Campaign.

All of this is a far cry from the early days of PFLAG Louisville. Hope remembers when a handful of their members met with a group of Lutheran ministers, who all sat quiet as a mouse afterward, like they’d never heard firsthand stories like theirs before. These days, tales of growing up gay and coming out are a Google search or MTV public service announcement away.

Though numbers have always fluctuated, PFLAG Louisville’s overall membership and average attendance at their events have declined over the past few years. Organizers hope that changes with the next scheduled event, a daylong fundraiser and community celebration on Oct. 14 at the BoomBozz Taphouse in the Highlands. They hope the chapter’s 25-year anniversary reminds people of its history and inspires the community to invest in its future. In addition to monthly support groups for adults and youths, PFLAG operates an annual scholarship for college students.

PFLAG Louisville president Nicholas Block, a former recipient of the scholarship, quotes a common saying among the national organization: “When you don’t need PFLAG, PFLAG needs you.”

PFLAG will never appeal to the people hell-bent on “traditional family values,” but for those family members who might be upset initially but willing to work on their feelings, the group offers a safe place for dialogue with others who’ve dealt with similar circumstances. Block says it’s not therapy, but it can be therapeutic.

If their daughter had come out as a lesbian, Brad and Laura wouldn’t have sought out PFLAG. The couple, who requested LEO use pseudonyms to protect their family’s privacy, knew gays and lesbians, including a cousin Laura saw get kicked out of his home after he came out in the late ’70s. They say they wouldn’t have cared about that. However, when their 18-year-old daughter told them she was going to live life as a man and legally change her feminine birth name to a masculine one, they were taken aback.

“We didn’t know a single transgender person,” says Brad. “We didn’t see this coming. We were like: What do we do? We knew we’d support our child.”

The only support their son requested was using his new name and masculine pronouns. Brad and Laura complied, though they admit slipups still happen a year and a half later because 18-year-old habits are difficult to break. On their own, they started attending PFLAG and some trans-specific organizations to learn how to be the best parent they could be for their son. They learned about the importance of vetting therapists and the process of transitioning. They recognized the hurdles facing the trans community, such as the desire to forgo on-campus living during college because he didn’t feel comfortable living in privacy-compromising dorm rooms with anyone else. When Laura realized she’d unknowingly sat next to a female-to-male trans person, she was excited about meeting somebody who might be able to give more insight into her private son.

Not every moment in this growing process was cheerful. Laura admits she had deep reservations about attending her first PFLAG meeting. The only way she made it through the door was by repeating that they could attend this one meeting and then never ever come back again. Once she was in the door and listening, she had a good cry, and then worked through a flood of emotions and tears with her husband and the group.

“There was a sense of loss,” says Brad. “Our thinking of what the future would be had changed.”

Sometimes, a person coming out responds to this initial shock and sadness with anger and frustration. Block says his time with PFLAG Louisville has helped him recognize that those feelings are normal and understandable. He’s not sure they’ll ever go away, regardless of how accepting society becomes in theory.

“I came out. That was a huge burden lifted from me, but that transfers to somebody. My parents had to take that on,” says Block. “Parents picture a life for (their kids). Their gut reaction is to feel like this changes the life they pictured. They’re grieving that. They can still have the huge house and white picket fence and 2.5 kids. They just can’t see yet that it’ll be a different gender spouse.”