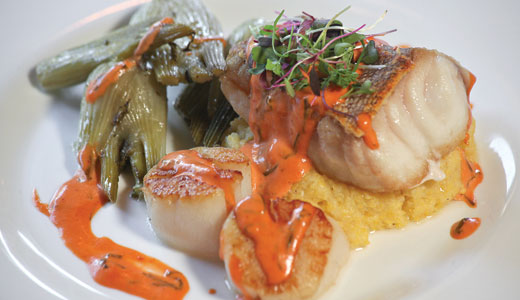 Je vais avoir le canard, said my friend Anne, summoning a French teacher and one-time expat’s easy fluency. Our server looked puzzled, though. “Maybe you could point it out on the menu,” he said, blushing a little. “I’m still learning the dishes.”

I’m not picking on the guy, though. He showed Hemingway-esque grace under fire as our party of four spent the evening on a lavish meal at Brasserie Provence. We enjoyed his service, a fine Loire Cabernet Franc and an excellent, mostly authentic Provençal meal while allowing plenty of slack for a kitchen slammed by capacity crowds on its first full weekend.

Reports from LouisvilleHotBytes.com foodies had indicated that this new spot was firing on all cylinders after its “soft opening” early this month and was running smoothly during its first week. An over-full house was putting them to a stress test, though, when Mary and I showed up with our pals Anne and Don on a Friday night.

To their great credit, proprietor Guy Genoud and Chef Edoardo Bacci made the right moves when orders started backing up at the kitchen window: They moved methodically, and if the pace slowed dramatically, so be it. It’s better for patrons to get a good, well-prepared meal later than a magnificent mess on time.

Frankly, by the time this review appears, Brasserie Provence will have a couple more weeks of experience, and all should be well. If you’re wary, though, you might hit the Brasserie on a weeknight.

Anyway, they’ve done an admirable job of converting bland shopping center space (the former Tony Roma’s) into a stylish venue that really does look and feel like a brasserie in southern France or even Paris.

So, you ask, what is a brasserie? Expect a casual yet stylish neighborhood eatery with traditional dishes and fine libations. It might be simplest to explain by two simple examples at Brasserie Provence: They have fancy white tablecloths, and they lay down white butcher paper; and there’s a good wine list … and a good beer list, too.

We started in on a bowl of warmed, sliced, crisp-crust baguette and herb-scented olive oil while examining the oversize brasserie-style menus, which contain a lot of French but, happily for all of us except maybe Anne, offers clear English explanations. Main dishes top out in price at $35 (for a grilled rib eye) or $65 (for sea bass for two). A diverse lunch menu tops out in the middle teens with a few mains, lots of salads and sandwiches.

We spread the table with apps, salads and mains and shared tastes of everything, judging it all good to excellent, finding only occasional fault with some dishes served less than sizzling hot — a flaw that earns a pass in light of the dinner rush — and some overly salty sauces.

Moules marinières ($8) brought a generous portion of two-dozen mussels in their shells in a simple sauce of fresh red wine, garlic and herbs.

Magret de canard ($26), a good-size duck breast garnished with olives and scented with thyme, flanked by green lentils and artichoke hearts, was delicious but on the salty side, and had cooled a bit in its wait to reach the table.

Entrecôte grillée au truffe ($34) was a thicker slab of rib eye than the classic French entrecôte cut, but there were no complaints about the first-rate steak, scented with truffle butter and grilled medium-rare to order. It came with french fries and, oddly, a second potato side, the gratin, which had been subbed without explanation for the Provençal grilled tomato.

By way of apology for the leisurely pacing and kitchen slam, management offered patrons complimentary desserts, which normally are $8. The four we chose — Tarte aux pommes apple tart, gâteau au chocolat chocolate cake, clafoutis de fruit rouges berry pudding, and “L’Opera” chocolate-almond “coffee cake” were all treats for our eyes and our palates.

Mary and I picked up the wine ($38) and apps for our party of four, which brought our share to $122.96. Our server’s patience and grace under pressure earned a $25 tip.