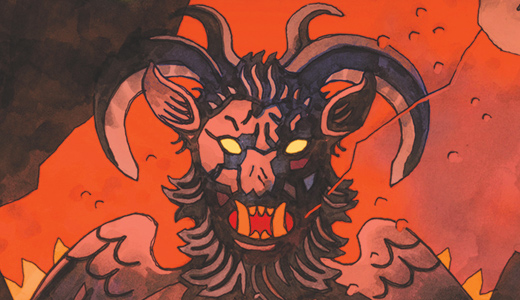 It’s Halloween season, and you can’t swing a black cat at a bookstore or library without hitting a zombie story. But if you’ve hit the saturation point, there’s plenty of high-quality reading where the thrills don’t depend on those ubiquitous brain-eaters.

Mega-publisher Penguin is offering up a great gift to scary-story fans: a series of modest-sized hardbacks with textured covers making the most of garish designs in super-saturated color. The half-dozen titles all get the same introduction, but it’s a doozy. Film director Guillermo del Toro lets loose as both fanboy and middlebrow critic, telling why each of these merits a place in the literary canon. Most selections are obvious (“Frankenstein,” some Poe), but then there’s also a collection of Ray Russell’s best.

As a dark-fiction writer (he was also the first fiction editor of Playboy, building careers for the likes of Vonnegut and Bradbury), Russell had minimal need for gore. His readers’ shivers are evoked when he first describes the unyielding cruelty of weapons and villains, and then he brings full detail to the tender and sympathetic tale of an innocent approaching the danger zone.

Often exploiting Victorian settings and storytelling methods to give sharper bite to modern plot twists, Russell reached a peculiar zenith with an alliteratively titled trio of twisted novellas: “Sanguinarias,” “Sagittarius” and “Sardonicus.” The latter of these has been endlessly reprinted (and filmed by schlockmeister William Castle), but all the tales in “Haunted Castles” are worth passing along to a new generation.

The combination of imaginative drawing and midnight thrills is nothing new: Text had often been accompanied by illustrations by the time of the earliest gothic novels. Just a touch of the unexpected or macabre from the right pen or brush can bring the reader even further into the world of the weird story. It’s difficult to imagine a better teaming than the accomplished suspense-writer/fantasist Christopher Golden with Mike Mignola — the man behind “Hellboy.” Their previous collaborations had the grand sweep of pulp adventure accompanying the darkness. But here they are challenging themselves by keeping the scope modest, and many characters humble.

The setting is Sicily during WWII. The recent Allied invasion has changed little except to those who lost property and loved ones. A village church and abbey accepts an additional role as orphanage, but the new, young priest isn’t sure what and how to teach to the youngsters who have lost so much. Gradually, he finds the help he needs via a cache of puppets in the basement. But as he fashions lessons using the puppets, could it also be that they are using him?

Feel free to recall that this concept has been spun into everything from a top-notch “Twilight Zone” episode to an ongoing franchise of “Chucky” movies. The reason to fall for it again is the quality of the telling.

Mignola’s many small drawings resemble woodcuts, and they eventually become signposts in subtle sequence as the tension evolves. Golden is likewise holding back from anything resembling spectacle — relationships among children, and between priest and nun, hew to the homey, even droll. The authors throw strange and spooky stressors at the war-weary, and observe what happens to those who don’t know how long their resilience and spiritual grounding will hold out. This is not an obviously wild ride; the book’s success depends on readers who quickly catch on that they are being asked to will themselves into adopting the imbalance that afflicts the characters.