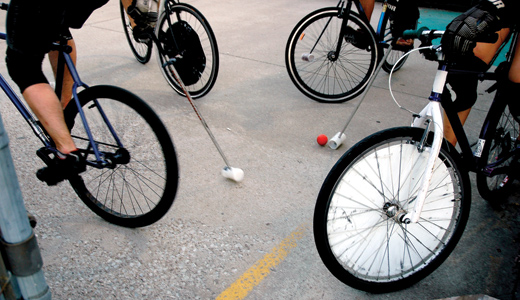 As the tunnel lights kick on, everything underneath starts to take on a yellow tone. Right now that includes six dudes on bicycles holding mallets, some orange cones and a tiny bat that either hasn’t noticed the sun’s gone down or is too interested in what’s about to go down to fly away. Three of the guys are wearing black T-shirts and coincidentally end up on the same team. The teams move to opposite ends of this rectangular makeshift court and wait.

With the return, the teams charge the red street hockey ball placed in the middle of the court. Mallets swing and the ball jets off toward one side. So begins another rousing game of hardcourt bike polo.

Hardcourt bike polo is one of those niche sports a lot of people haven’t heard of but would pause to watch if they were channel surfing and stumbled across it on one of the dozen or so channels for ESPN — not that the sport has broken into that mecca yet. This lovechild of polo and hockey is fast-paced, easy to follow and occasionally brutal. Thousands play in formal or informal leagues across the world. Here in Louisville, there are a few dozen players.

If locals associate hardcourt bike polo with anything, it’s with the Barret Bar at the corner of Barret and Winter avenues. A few years ago, the owner started allowing players of Louisville Hardcourt Bike Polo to start using an empty fenced-in space located behind the building, and after a while, it became permanent. Yet, the real action happens not at Barret but under Central Avenue, in a wide pedestrian tunnel connecting two of the parking lots at Papa John’s Stadium.

The size of Barret Bar’s court doesn’t accommodate a full game, so everything’s been modified down. Instead of teams of three, it’s doubles. Instead of goals being in the center, they are in the corner. It’s the miniature golf of hardcourt bike polo, but it works.

The tunnel is wider than the bar court, so they can play three-on-three, and there’s no chain-link fence to get handlebars stuck in. It’s protected, which means they can play through rain and snow — and they do. It’s here where Drew Combs and others smash mallets, shoulder-check one another and battle for possession of the ball.

It’s competitive, says Combs, but full of camaraderie. When you play a sport most people haven’t heard of, it pays to be welcoming to newcomers. Usually, someone has a spare bike in his trunk to loan to somebody who’d like to jump in. Everyone goes easy on the newbies until they get the hang of things.

Combs isn’t a newcomer. He is one of a handful of Kentuckians who travels extensively to compete in hardcourt bike polo tournaments held around the country and world. He’s been to Calgary and Toronto in Canada, Chicago and Philadelphia, and all across the Midwest and Northwest United States. He even had the opportunity to teach bike polo to people in Zambia.

“The sport seems to draw a certain kind of person,” says Combs. “Everywhere I go, I can call people up because we have that immediate connection.”

“We’re those hippie bike guys that show up everywhere,” jokes Zachary Roberts, another local player. Roberts was into bicycle racing but switched to hardcourt polo, partially because it seemed more communal and partially because it didn’t require waking up as early. Whether it’s grabbing coffee before a group road trip to Lexington for a tournament, or throwing back a few beers at the bar after a pickup game, the scene can be as much about forming friendships as scoring goals.

Horses are expensive, but everyone in the 1890s wanted to play polo, so somebody invented bike polo for the poor man. A century later, bike messengers in Seattle with downtime reinvented the game for an urban environment — and hardcourt bike polo was born. At least, that’s how one version of the creation story goes. It’s open to debate.

Whatever the sport’s beginnings are, players and organizations have seen interest and participation grow steadily over the years. The League of Bike Polo was created in 2008 to help connect distant groups. It now claims the sport is played in more than 300 cities in more than 30 countries. A few years ago, in 2011, an organization called the North American Hardcourt was created to standardize rules and refereeing.

At some point, tournaments began being streamed online. Bike shops saw an unfilled need and started offering bikes specifically for polo, as well as mallets, though many still make their own out of ski poles and PVC pipe. City governments started acknowledging the sport and built courts for them.

Louisville held its first tournament in 2008. The players’ regular practice spot was an empty garage downtown, but they were driven out when the structure’s owners switched. According to Michael McCollum, who was part of the city’s first wave of hardcourt bike polo players, an unused tennis court in Baxter Park was briefly designated as theirs, but players received physical and verbal harassment from nearby residents, so they left. The only thing they kept was the Metro Parks sign, which had been ripped off its post by someone angry over their presence. It’s now attached to the Barret Bar court’s entrance and has one bright orange word: THUNDERDOME.

“Lexington has city-sponsored courts. Cincinnati, Columbus — it’s big regionally. We just never managed to get it off the ground here,” says McCollum. “They didn’t seem to want to give us the time of day. Maybe we were a little more hotheaded.”

Now, a new wave of enthusiastic hardcourt bike polo players is making it their mission to expand and bring more legitimacy to the sport locally. One of the players, Ali Cheff, moved to Louisville from Virginia in order to play more bike polo. She and others are trying to start a “newbie night” to introduce the uninitiated. They’re also opening up talks for a larger court that wouldn’t have to check the Cardinals football schedule before setting game times.

McCollum is happy to see the figurative torch being passed to a new group. He says, in the beginning, players felt obligated to show up to every pick-up game just to ensure there were enough people to play. Now, the group is big enough and consistent enough for some flexibility. It’s a good sign for the community, which quite possibly could be the next roller derby or dodgeball and explode in popularity.

There’s nothing quite like the sport, says Cheff, adding, “Everyone should try it. We’ll wrap you up like the kid from ‘Christmas Story’ (for safety). It’ll be great.”