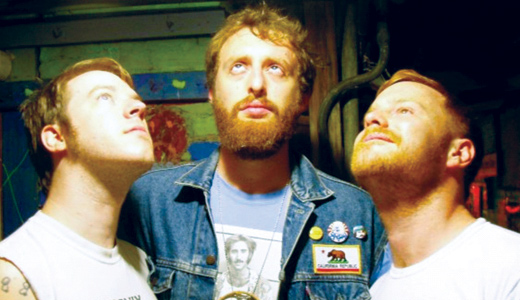 The Louisville/Bloomington post-punk band Waxeater issues a challenge to the smartest, savviest Americans this month: Sure, you love “The Wire.” But have you made an entire concept album all about “The Wire”?! With song titles like “Omar Comin’,” “Game Recognize Game” and “A Man Has to Have a Code,” Waxeater’s Baltimore Record will make you say “Sheeeeeit.” The band plays Third Street Dive on Oct. 20, and the album will be available for purchase there.

LEO: Whose idea was this?

Rob Montage: It was mine. I had it floating around for a couple of years when I started writing songs that were about the show. I was, like, “I should write a whole record about the show.” It became, “Let’s have a pop culture hook while also talking about our own stupid problems, which are so much less important than the problems of the people on that show.”

LEO: Are you comparing yours versus theirs?

RM: Not necessarily. More like plot references and character references to the show while also talking about not necessarily my problems, but middle-class, white punks who grew up in the city, like, “We have problems, too, we have bills and we have relationship issues …” But then, let’s take a step back and look at real problems.

We’ve never taken a very serious angle to anything, so it felt like a good way to talk about some semi-serious stuff while also being sarcastic about everything, too.

LEO: Does that make this your “growing up” record?

RM: I guess (laughs). There are serious things going on, but it’s also a record about a TV show. We didn’t sit down and write a Propagandhi album.