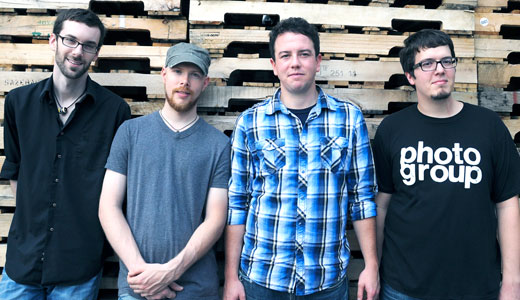 Indie rock band Violet Knives will release their album, Woman, on Saturday with a show at the Highlands Diamond Pub. LEO went inside the minds of Shawn Steele (guitar/keys/vocals) and Eric Condon (bass) to learn more.

LEO: This is your first album. Why?

Shawn Steele: Certain songs thrive on headphones, as opposed to at a bar, so it helps to get those into peoples’ homes to give them a fair shake. We also switch instruments a lot, so our onstage footprint is ridiculous when we try to play all of our material.

Eric Condon: “Woman” is the title of the front cover painting, but it also taps into something more abstract. Because, look: We’re four straight, white males in a rock band. There’s a definite sense in music right now that that’s played out — and for good reason. So we really try to make clear that being dude-bro rock guys is not what we’re about. There’s a certain femininity to what we do, and I think that’s what drew us to that title.

LEO: How many drummers do you plan to go through in the next year?

SS: It’s strange to introduce ourselves to the world with an outgoing drummer, but we’re not exactly Spinal Tap. Derek’s been with us since the beginning, but he recently became a dad, and we respect his decision to focus on his son. Matt Cody will be taking over after the show, and we’ve already scheduled him a vasectomy to avoid turnover.

EC: Depends on what you want out of a show. We’ve played some bigger venues, like Headliners, that were great experiences. And we’ve played smaller shows that were a lot of fun. Sentimentally, I’d say the New Albany Summer Concert Series, because I love playing in my hometown. But I think I can preemptively proclaim this upcoming release show to be our best ever.