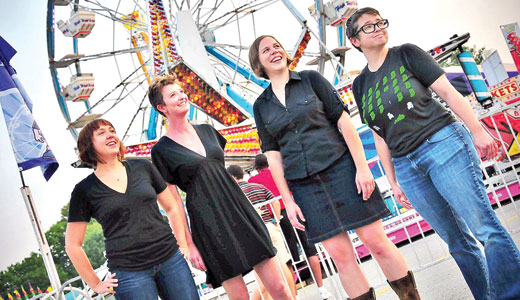 Sisters of No Mercy

Perhaps Julie of the Wolves’ greatest strength is in blending the pedigree that comes with their “ex-members of” list with their ability to build on and exceed their constituent elements. Julie of the Wolves is comprised of some of the finest players in the local indie/punk scene, which includes Carrie Neumayer (also of Second Story Man) and Stephanie Gary on guitars and vocals, Madame Machine’s Salena Filichia on bass and drummer Becca Lindsay, who previously played with Neumayer in Minnow.

Julie of the Wolves was intentionally crafted as a female-only vehicle. Lindsay explains, “I called Carrie one day and said, ‘I would love to play music with just women,’ because I had never done that before. We decided that we would start a band with all ladies, and from there, the ball started to roll.”

Lindsay continues their origin story, noting, “The first people Carrie thought about contacting to play with us were Salena and Stephanie, who had both played in Venus Trap. We lucked out in that they were both up for getting together and playing some music.”

She adds, “I would say playing in other bands before forming Julie of the Wolves influenced us simply because we brought what we currently knew from past experiences to the table — but none of us had an agenda on how the band should be other than keeping it fun and not taking ourselves too seriously.”

For singer/guitarist Stephanie Gary, writing music is an avenue for introspection. “If there is a theme for this album, for me, it was exploring relationships between opposing forces — creation and destruction, apathy and passion, staying young and growing up, love and loss,” she says. “Songs are the best way I’ve found to explore those things.”

Part punk screed, part indie darling, the band is set to release their debut album, Create/Destroy, with a show on Nov. 1 at Zanzabar.

Learn more about Julie of the Wolves at julieofthewolvesrock.tumblr.com.