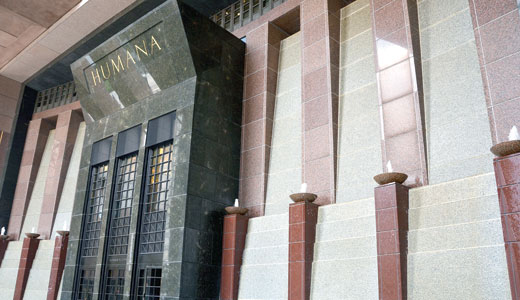 This Louisville building has certainly received attention. An international design competition was held, The New York Times came calling and Time magazine praised it. I’m not talking about the sadly defunct Museum Plaza but the much-heralded corporate headquarters of health-care company Humana Inc.

It’s time to go back and revisit the building that made Louisville famous in the 1980s. We’re a city best known for its Victorian houses and cast-iron storefronts. Contemporary architecture? Not so much.

By now, we’re quite used to the building that has sat at Fifth and Main streets for more than 25 years. You know it — it’s the pink one that resembles a milk carton, a cash register or, so I’ve heard from seedy sources, something a bit more phallic, depending on your point of view.

It all started back in 1982 when Humana held a competition for a new Louisville-based headquarters. The five architects who participated were Ulrich Franzen, Cesar Pelli, Norman Foster, Helmut Jahn and Michael Graves.

Graves, a postmodernist, won the commission.

“I was in my last year of architectural school when the competition to design the building was announced,” recalls Tony Kleyer, president of the Kentucky chapter of the American Institute of Architects. “I remember shaking my head in disbelief as I saw the photographs of the models and read the explanations from each architect on their design. I absolutely abhorred postmodern design and its principles (of) regurgitation of the past. However, it was very clear that this was the best design for Humana. The other entries could have been built anywhere. This design was only valid in Louisville.”

“The American Institute of Architects named it (one) of its most important and favorite buildings in 2007,” Kleyer continues. “While I’m still not a fan of this style, I have warmed to it significantly and can appreciate it for what it has meant for Louisville.”

Postmodernism came about in the 1970s and was especially popular in architecture. The buildings are colorful and eclectic, referencing historical styles such as Roman, Neoclassicism and Art Deco.

Graves’ Humana Building, begun in October 1982 and completed in May 1985, is a 27-story granite building that received the National Honor Award from the American Institute of Architects in 1987. Time magazine labeled it one of the top 10 buildings constructed in the ’80s.

Instead of a skyscraper without reference to the street or the city, Graves anchored it to the Louisville cityscape with an eight-story loggia that is close in height to the 19th-century cast-iron-fronted buildings of West Main Street. In appreciation of the Falls of the Ohio and the river, the loggia features a 50-foot waterfall fountain.

The ground floor lobby is equally spectacular, with eight colors of marble and a rotunda leading to the elevators. Both the loggia and lobby were designed as public spaces.

“There are few skyscrapers, even in this decade of startling towers, that have been as awaited as the architect Michael Graves’ design for the new headquarters here of Humana,” wrote Paul Goldberger in The New York Times on June 10, 1985. “And beyond its significance for the reputation of … Graves, Humana is a striking example of a large, prosperous corporation seeking to build a headquarters structure that would stand as a statement against conventional, modernist corporate architecture.

“Humana is a warm and inviting building, perhaps the first skyscraper of our time to be both serious and visually alive. For too long architecture that has taken itself quite seriously has been a deadly bore, and architecture that has been lively has tended to be frivolous. But Humana is neither boring nor silly — it is at once a building of great dignity and a building of great energy and passion.”