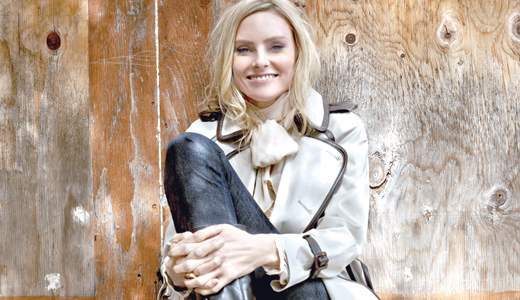 Throughout her 30-year career, Aimee Mann has accomplished much: hit songs and MTV stardom in the ’80s, receiving Academy Award and Grammy nominations for the same song in the ’90s and paving the way for musicians to escape the major-label system by self-releasing music at the turn of the century. But what people might not realize is the impact Aimee Mann has had on the Louisville movie scene.

Part of the reason is that “Pleased to Meet Me,” the movie in which she stars with fellow musicians John Doe and Joe Henry, won’t be released until Oct. 10 — and that’s only in New York. A local release date hasn’t been announced yet for the movie, which was shot in Louisville over three weeks last year.

“We were trying to have a day off there, but we couldn’t,” Mann says of her time as a movie star. They ended work some days early enough to get late dinners, but not much more. “I’m very disappointed, because I’m now intimately acquainted with a half-dozen restaurants in town I’m really dying to get back to.” Often spotted at Please & Thank You, Mann and her costars also managed to eat at Jack Fry’s three times during their stay. “I really do love that town,” she says.

Henry, whose brother David lives in Louisville and co-wrote the movie’s screenplay, is “a real foodie,” Mann says. “He swung this arrangement where he was going to write about Louisville for (AFAR Magazine), so we all ate out on someone else’s dime.”

(A fun side note: Joe Henry’s wife is a sister of Madonna (yes, that one). Mann’s husband is musician Michael Penn, whose brother Sean was once famously, loudly married to Madonna.)

Mann laments that she won’t get to see more of the city when she returns for this weekend’s concert. “When you’re on tour, it’s a lot of in-and-out. You get into town, you go to the venue and you’re pretty much (stuck) at the venue. It’s not so easy to get out … That’s just the way it is. You’re there to work.”

Mann has appeared on numerous TV shows through the years, including a buzzed-about recent “Portlandia” sketch, but the music-centric “Pleased to Meet Me” is her first major role. Mann didn’t have time to be nervous, though, because the very indie production couldn’t afford it.

“I don’t really act. I think acting is very difficult,” she says. “But because the part was enough like … I could envision myself in that situation very easily, so I just did, like, ‘How would I react?’ I didn’t have to formulate a real character-character.”

It’s Mann’s second role in a movie significant to a Louisville audience. Though her role as a German nihilist who loses a toe in 1998’s “The Big Lebowski” was filmed in her hometown of Los Angeles, LEO readers don’t need to be reminded what that movie means to Louisville.

About her other locally notable movie role, Mann laughs, “Yeah, people are really into the ol’ ‘Lebowski.’” She hasn’t performed at any of the Lebowski Fests yet, and didn’t know it was a possibility — her impression of the festival was that actors from the movie just show up. “What does that consist of? What does one do? You know, I had two lines in German. It’s not like I was a big player.” Informed that bands do perform, she brightens and exclaims, “Well! It’s looking totally different now.”

Mann’s current project is The Both, a collaboration with another acclaimed singer-songwriter, Ted Leo, in what she calls “kind of a power trio” format, with Leo on guitar, Mann on bass and Scott Seger on drums. This tour sees Leo opening with a solo set, and then joining Mann for a few songs during hers.

The Both has been recording an album, and Mann’s label, Super Ego, hopes to release it in February. “Part of the fun of the project has been trying to find the place where we meet,” she says about working with the punkier Leo. Thin Lizzy emerged as a shared reference point. “I think we’re also both in the mood for that band experience … sometimes being solo, when you have all the responsibility and all the attention — it’s just a different experience. And it’s fun to be part of a group.”