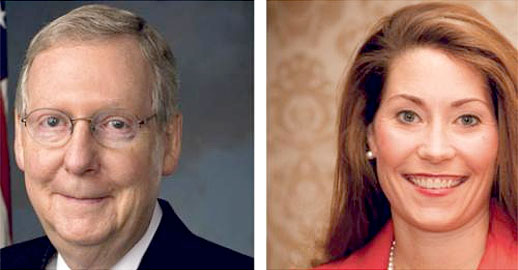 The Environmental Protection Agency released new rules to regulate the carbon dioxide emissions of newly constructed power plants on Friday, which supporters say will help combat climate change, and critics say will be a death blow to the coal industry.

Days before the official announcement, two of those critics running against each other in next year’s U.S. Senate race in Kentucky — Sen. Mitch McConnell and Democrat Alison Lundergan Grimes — got a head start on ripping President Obama and the EPA, as well as each other.

McConnell attacked the new EPA regulations as part of Obama’s so-called “War on Coal” that will further devastate the industry and cost Kentucky jobs and higher utility bills. His campaign says that if elected, Grimes would do the bidding of Obama and Senate Democrats to bury Kentucky’s coal industry once and for all.

Grimes also harshly criticized the Obama administration’s new regulations, but added that for all of the influence McConnell claims to have, he’s done nothing to stop the rapid loss of coal jobs in Kentucky over his five terms in the Senate.

However, both strayed far from giving a full picture of the facts on the impact of the EPA’s new rules and the multitude of factors responsible for the decline of the coal industry in eastern Kentucky that have little to do with the EPA.

Tom FitzGerald, director of the Kentucky Resources Council, says the doomsday rhetoric over the new EPA rules are greatly exaggerated, as free-market forces had already wiped out the prospect of new coal-fired power plants.

“What I found was fascinating is the regulatory impact analysis of the new regulations reflected that they have a minimal amount of impact because no one is planning to build coal-fired capacity in the next eight or nine years, anyway,” says FitzGerald. “That’s as much of a story as anything else.”

FitzGerald notes that the EPA was actually mandated to enact the new carbon-emission rules by both the 1990 Clean Air Act and a 2007 Supreme Court decision. Congress passed on the opportunity to green-light a comprehensive cap-and-trade energy bill in 2009 to determine emission standards themselves, as it died from a McConnell-led filibuster in the Senate.

McConnell actually voted for the Clean Air Act in 1990 that allowed the EPA to go forward with the new rules last week. Though McConnell failed to pass his amendment to limit its impact on the coal industry, he ultimately voted for it, reasoning at the time, “I had to choose between cleaner air and the status quo. I chose cleaner air.”

Jason Bailey, policy director of the Mountain Association for Community Economic Development, says that for all of the talk of Obama’s “War on Coal” devastating Kentucky’s coal industry, the major factors have been the low price of natural gas glutting the market due to new extraction capabilities, and the low reserves of easily mined coal in eastern Kentucky, making extraction much less cost-effective.

“The price of natural gas has sped up the decline of eastern Kentucky coal, but it was declining before natural gas got cheap,” says Bailey. “And that is because it’s so expensive to get out what’s remaining.”

Both FitzGerald and Bailey add that western Kentucky’s coal industry has actually increased production due to recent EPA regulations, as their high sulfur coal has gained market value due to new scrubber technology mandated at power plants, such as the new retrofits currently underway at LG&E’s Mill Creek plant in Louisville.

Bailey says the false narrative used by EPA critics damages the ability of Kentucky to realize the inevitable demise of eastern Kentucky’s coal industry and find positive economic alternatives for the region.

“It’s a huge problem, because we can’t have an honest conversation,” Bailey says. “If you believe coal will suddenly rebound as soon as Obama takes his foot off our necks, then why would you try to figure out any other kinds of job opportunities?”

Next year the EPA will release their new carbon-emission rules for existing plants, which are more likely to actually affect utility rates for coal-fired plants. Rep. John Yarmuth hopes the certainty of last week’s EPA rules will help speed up carbon-capture technology so coal plants can implement them, but regrets that Congress passed on the 2009 energy bill that added $60 billion for carbon-capture research and was estimated to result in a net increase in jobs and only bring a modest utility rate increase for Louisvillians.

“(McConnell) killed that in the Senate and has campaigned on it ever since, even though it was a very, very good alternative for Kentucky, rather than letting the EPA regulate,” says Yarmuth.

Among the Grimes press releases last week criticizing the new EPA rules, her campaign says she “will fight for incentives for companies to continue to invest in coal.” On her campaign website, she criticizes the $15 billion currently spent by the federal government on renewable energy initiatives as wasteful.

Though her campaign finally revealed last week that Grimes “understands the reality of climate change,” they say that any policy solution must not adversely affect Kentuckians’ livelihoods. The campaign deferred further questions on the matter from LEO, saying they will be releasing an energy and environmental policy over the coming weeks.

Louisville environmental activist Sarah Lynn Cunningham tells LEO she is deeply disappointed with Grimes’ coal rhetoric, saying “she’s either pandering to coal field voters, pandering to coal industry campaign funding sources, or both. I think it’s quite possible that her strategy could be successful, if we define success as her election. But it’s disappointing that we keep claiming this as an either or on protecting the economy and the environment, because that’s not true.”

Cunningham told WFPL that she was flirting with the idea of casting a protest vote for long-shot candidate Ed Marksberry — who has taken a strong stance to combat climate change — in the Democratic primary, but that was before Marksberry announced he would run in the general election next fall as an independent. Though Marksberry has no chance of winning, he could potentially pull enough protest votes from environmentalists to give Grimes headaches in a very close election with McConnell.

Thomas Pearce, regional field organizer for the Sierra Club in Kentucky, says he will continue to push for Grimes to stand up for cleaner energy.

“We need a champion that is going to protect common sense public health safeguards and the 13 percent of Kentuckians that have asthma, and the EPA is providing that with these climate rules,” says Pearce. “Kentucky needs and deserves a new energy future, because we’re going to be left behind and out of a new economy.”

Rep. Mary Lou Marzian, D-Louisville, who has continually pushed her bill in Frankfort for Kentucky to diversify its energy portfolio to include renewables, hopes Grimes will support incentives improving the environment in all industries, even including coal. However, she says the alternative to Grimes next fall is no choice at all for Democrats.

“I wish she would be stronger on clean air and alternative energy, but I think she’s a million times better than that fossil (McConnell) we have up there in D.C. now.”