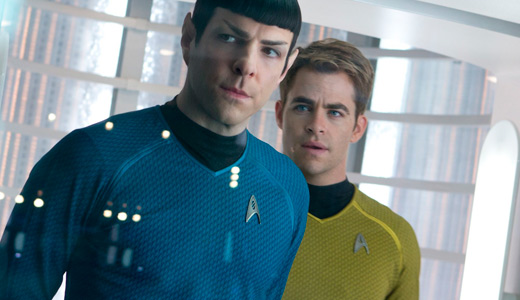 This second outing of J.J. Abrams’ rebooted franchise is designed to (1) immerse you in his new Star Fleet culture, where much of the future drama will take place, (2) introduce his new Klingons, and (3) dazzle you with how cleverly he can slip in story elements from the best STNG movies without your realizing it. Frankly, if you need a review of this, then you should log on to Amazon and buy a life. The rest of us know that it’s probably the greatest Trekkie adventure ever made. Just buy it — oh, and check out the awesome Blu-ray 3-D Combo Pack Limited Edition Gift Set with a real, neat-o working Starfleet Phaser! We are such geeks.

The unforgettable classic horror hit from the ’50s about a scientist (“Voyage to the Bottom of the Sea”’s David “Al” Hedison) who dabbles in matter transfer and gets his genes spliced with a housefly. The bug gets big, the man gets bugged, and Vincent Price tries valiantly to maintain a straight face while asking Al to be a man and just (snigger) put the insect aside. Get it? “Insect-aside!” What are we, alone here? Written by James “Shogun” Clavell, who denies it to this day, this is the classic of classics and an absolute must-own, finally on Blu-ray. Helllp meee, helllllp meeeee!

AN AMERICAN HIPPIE IN ISRAEL

This legendary once-lost film, now available on Blu-ray, is terrible, possibly the worst movie ever made, but it is simply too far-out to miss. Originally recorded in Hebrew, it’s the earnest tale of a shaggy young man who flees society with a handful of others, looking for an uninhabited island where they can start the world anew. To say it doesn’t go well is an understatement (and involves sharks), but along the way we get Hebrew singing, topless dancing, armed mimes, circumcised penises, free love, anti-war prayers and counter-culture nonsense out the wazoo. Could only have been made in the ’70s. Enjoy.

This bloody little WWII cyborg stinker excels by doing things old-school. All the special effects are “practical”: live, in-the-camera, on-the-set, without a damn CGI computer-generated anything to spoil the fun. It stars “Hellboy”’s Karel Roden as the crazed scientist who, using Viktor Frankenstein’s infamous journal, stitches together still-quivering bits of former Nazis and whatever functioning artillery he can find to create monstrous, ghastly super-soldiers. The movie’s only downside: It’s done in “found-footage” style — but the monsters more than make up for it. Don’t miss it.

The first season won six Emmies, so they had to come out swinging for this second one. Former Marine Damian Lewis is now a congressman and Claire Danes is on the outs — officially, at least — with the CIA, yet they come together (snigger) once again when terrorists pop up. But can you trust your lover when no one in the world is who they claim? Incredibly suspenseful; the equal of any of the Euro dramas we’re always pimping.

If you’re of an age where you have used the phrase “hairy clam” to describe what you ate on a date, then you’ll love this truly obscure “Pink” film from Japan. It’s of the “diver” genre, stuffed with scores of flawless, historically accurate topless young women who once dived for seafood and tourist dollars in Japanese coastal villages. Lots of soft-core canoodling, a wacky real estate plot and a stud hired to woo the divers into selling their land combine for a fun 70 minutes of homemade man-handling. Enjoy.

LOVE IS ALL YOU NEED

Mature Nordic babe Trine Dyrholm has just been dumped by her longtime hubby after surviving cancer. Pierce Brosnan is a lonely widower with lots of regrets who acts like a complete jackass while at their children’s wedding in Italy — which isn’t going very well, anyway, as the would-be bride and groom are having their own problems. Yeah, it’s a big old chick flick, but between the gorgeous cast, the breathtaking seaside villas, a smattering of nudity and an emphasis on entertainment rather than weepy catharsis, this is very watchable. Good date flick.

The aging Material Girl may no longer be able to shake it Like A Virgin, but she can still pack a stadium and proves it in this compilation of her 2012 tour involving 80 venues in 29 countries. A full two hours of Madge, scores of dancers and hundreds of costumes, culminating in a $350 million allowance cha-ching for little Lourdes, Rocco, Mercy and David Banda Mwale.

The late Cory Monteith of “Glee” stars in this drama-comedy along with a number of other TV faces including Dustin Milligan (“Call Me Fitz”), Amanda Crew (“Suits”), Gabrielle Miller (“Call Me Fitz”), Benjamin Ratner (“Eureka”) and Kacey Rohl (“The Killing”). It’s something of an anthology, four tales of siblings dealing with each other, their shared parents, extended families and the world in general. More drama than comedy, but as a whole, well-written with surprising depth.

It was 1958 when Steve McQueen made his TV debut in this classic Western series. He’s Josh Randall, a complex and surprisingly tender-hearted bounty hunter who used his “mare’s leg” — a sawed-off shotgun! — to protect the innocent and, if necessary, bring down the bad guy. The list of guest stars goes on forever — spotting them is part of the fun — as does the roster of legendary writers and directors. Now available for the first time in a complete set with all the bonus goodies an Oater fan could dream of. Highly recommended.

Veteran actor J.K. Simmons (from those Farmer’s Insurance TV commercials) is documenting what it’s like to be really old by interviewing gomers at an old folks home. They proceed to eat him alive. For revenge he calls in a bunch of cameos — Tim Allen, Kevin Pollak, Randy Couture, Sam Raimi, etc. — to help him settle the score. Not great, but has its moments.

A screwy little horror thriller about a game that brings out the worst in people (even worse than strip poker?). With the most amazing cast we ever saw, including Robert “Terminator II” Patrick, Danielle “Hatchet” Harris, James “Oblivion” Duval, gorgeous Mircea Monroe and Electra “Machete” Avellan (those last two appear in damn near everything these days), plus the late Sean “Mega Shark vs. Giant Octopus” Lawlor. Is it any good? With this cast, who cares?!

Paul Bettany and Stephen Graham are detective-brothers whose dad is a famous, tough-as-nails former police chief, on the trail of a murderer in their small town. But when their interrogation of a suspect goes horribly wrong, it draws the attention of suspicious colleague Mark Strong, leading to a savage confrontation. Not the best thriller ever made, but a great cast clearly having fun.

The low-budget horror genre had seen the Frankenstein tale retold just about every way imaginable, but it took the father of “Basket Case” (1982) to truly bring it back to life. Frank Henenlotter wrote and directed this gory comic tale of a woman, chopped into easily manageable bits by a lawn mower, reassembled — with occasional prostitute spare parts — by her loving fiancé. The result? One of the funniest, bloodiest tales of a killer-babe ever lensed, just re-issued on DVD after an absence, uncut and newly transferred from original materials, plus terrific extras. Recommended.

HAMMER OF THE GODS

Charlie “Twilight” Bewley stars in the British-made tale of Steinar, a young Viking on an epic quest (is there any other kind?) to find his brother, Hakan The Ferrocious, and become a man in 9th century Britain. Apparently this requires a lot of limb-hewing and eyeball-gouging, so the producers added a couple of members of the TV show “Vikings” to the cast to help them make their quota. Not the best Viking movie ever made, but darkly entertaining.

One of SyFy’s better efforts, based on a book by Stephen King, returned this season with a vengeance, picking up the pace after fans complained about the laconic New England tempo — with Emily Rose being held hostage in the first episode by a man desperate to locate the plot-central Colorado Kid, while Lucas Bryant and sneering Eric Balfour go hunting for UFOs. The season ends with bang — literally — as a meteor shower strikes. One of TV’s best-written, darkest and most imaginative shows, yet with great heart and surprising flashes of humanity.

The latest in the animated Marvel Knights canon finds Dr. Bruce Banner — who was executed for rampaging through NY as the Hulk — seemingly resurrected, which creates a crisis for Nick Fury. Worse yet, the only one he can turn to is that always-unpredictable loose-cannon, Wolverine. Will Wooly save the day or just make matters worse? Nicely over-the-top.

This little space opera is a hoot. Sean Patrick Flanery (“The Boondock Saints”) and his motley crew of deep-space scavengers stumble upon some alien tech that, in the wrong hands, could end human civilization (what there is of it, anyway). Has a nice “Mad Max” feel at times, with lots of action, some fun special FX, Roark “V” Critchlow, Jeremy London from “Party of Five” and a roster of surprisingly hot women. What more could you want?