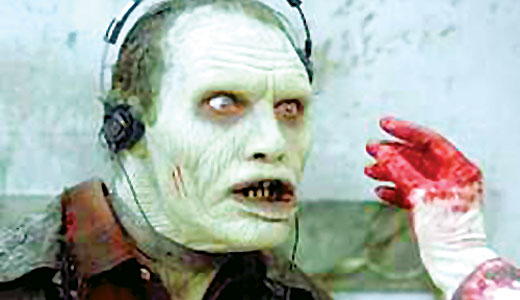 Day of the Dead

DAY OF THE DEAD

This is chapter three of George Romero’s original zombie series, and while it has long been available on Blu-ray, this is a Blu-ray Collector’s Edition: newly remastered with complete audio commentary by Romero, Tom Savini and actress Lori Cardille — plus 31 minutes of production footage, courtesy of Savini, and much more! In this chapter, the last surviving humans huddle in an underground bunker foolishly attempting to control test-zombies, while other rotters rule the surface world. Is this edition worth the cost? Only if you want to show future underground-dwelling Americans how The End was predicted by a balding horror-nebbish in Pittsburgh!

In a phrase: Brad Pitt makes a zombie movie. He spends much of the picture being shuttled from one disaster zone to another, watching the best mass-zombie-attack scenes ever created by a computer, safely from a distance. Coming in waves, swarming across overturned cars, up trees, filling in the gaps between tall buildings, with no concern for their own safety, focused only on spreading, devouring, consuming and destroying, this is the scariest cinematic carnage since Madonna’s “MDNA” tour video. Not a masterpiece, but very entertaining; the sort of film that the SciFi Channel might dream of doing if they weren’t such schmucks.

A GIRL AND A GUN

A lively, blistering, un-preachy dissertation/doc on why so many women are packin’ heat today. Traditionally considered a “guy thing,” the truth of the matter — the ratio of concealed-carry permits between women and men, for example — will startle you. Bottom line: Many women say that guns make them feel empowered, and the skyrocketing rate of female gun violence (almost exclusively against men) may just be the beginning of a new world order. Recommended.

A LETTER TO THREE WIVES

For those unaware of their own cultural history, this is one of the most celebrated and adult dramas of all time. The three wives in question are Jeanne Crain, Linda Darnell and Ann Sothern, and the letter is from a slutty “friend” (voiced by an unseen Celeste Holm), telling them that she intends to run away with one of their husbands — but not which husband. What ensues is one of the best-written, best-directed ensemble pieces imaginable, courtesy of legendary director/co-writer Joseph L. Mankiewicz. And, yes, we secretly have crushes on each of the wives, three of the loveliest women Hollywood ever ruined. Join us.

Liberace was flaming before flaming became an adjective: a flamboyant, sequin-covered superstar entertainer who spread his Las Vegas empire from coast to coast during television’s variety heyday. He was also gay before gay became a noun, “secretly” having a raucous relationship with the much younger Scott Thorson. Here Michael Douglas and Matt Damon recreate the home life of the two in all its glitter and pain for director Steven Soderbergh. In turns campy, shocking, surprising, tender, enabling, devastating, funny and cruel — just like real life! Recommended.

There’s nothing particularly deep or thought-provoking about this fun little “let’s go chase the spooky things” romp from NBC, but that puts it right in the sweet spot between “Buffy” and “Supernatural.” Average-guy homicide detective David Giuntoli is the reluctant last in a line of hunters of supernatural fairytale baddies. But by Season 2, he has become far less reluctant, embracing his responsibilities as the folklore foes get ever more perplexing and gruesome. Scary at times, with an attractive cast, interesting characters and a bit of smooching; addictive as hell.

It’s surprising how popular this series remains in viewers’ minds, given that it lasted only one season back in 1957-58 and was a 30-minute b&w weekly drama about life in the U.S. Coast Guard. Wendell Corey (future president of the Academy of Motion Picture Arts and Sciences) stars as Capt. Ralph Baxter, a man dedicated to protecting his country, his city and his bay from crime and danger. And yet, despite its meager premise, it routinely ranks as one of the best-remembered shows of the ’50s — the decade that gave us Westerns, war action, cop dramas and space operas. Check it out.

This two-man drama stars Josh Duhamel and Dan Fogler as childhood friends coming together for a long-awaited road trip after many years apart. This being the movies and all, their pickup truck breaks down in the desert, miles from anywhere. As they succumb to the heat, decades-old conflicts bubble to the surface, building slowly to a bloody life-or-death confrontation. We had the same thing happen at a McDonald’s drive-thru once — true story! Good stuff.

Sophia Coppola brings us this based-on-a-true-story about L.A. teens who go on a crime spree among the rich and famous, racking up some $3 million in loot before succumbing to their own hubris. The young cast is excellent, especially Emma “Hermoine Grainger” Watson, but the real star is our collective infantile fascination with smartphones, celebrity culture and social media. Edited into an ADD-affected swirl of seemingly random scenes, it really lets the viewer get into the heads of the disoriented and hyper-excited kids. So who’s to blame for all this misspent youth? You’ll be arguing about it for days.

TRIUMPH OF THE WALL

A documentary for people who hate documentaries. Filmmaker Bill Stone hired a stonemason in rural Canada to build a 1,000-foot dry-set stone wall, intending to film the process. Time estimate? Eight weeks. Eight years later, he’s still at it. The reasons why will resonate for any homeowner who has tried to do a simple project, only to have it turn to shit. We laughed our butts off.

A no-budget supernatural chiller starring no one you ever heard of. Gwendolyn Garver plays a high-schooler with spooky visions of the future — and none of them are pleasant! Everyone she knows seems to be getting killed over a decades-old mystery involving the death of a young boy. Is there nothing she can do to save herself and her few remaining friends? It’s not Shakespeare, but it’s not bad.

From the Cartoon Network series “Adventure Time with Finn & Jake” comes this perfect compilation: three animated hours/16 episodes of Finn, a human boy and his “brother,” Jake, a magical dog that can stretch to any size or shape. They live in the future world of Ooo, 1,000+ years after nuclear war, but here’s the best part: Jake just loves to screw with Finn’s head, constantly teasing and setting him up for mayhem — just like real brothers! In this set, Jake adopts forest critters, proving you don’t have to have a clue to be a parent. Oh, and it comes with a really cool Jake hat! Neat stuff.

The A&E Channel has a minor hit on its hands with this icky look at Hitchcock’s “Psycho” killer Norman Bates as a young man (Freddie Highmore), under the twisted thumb of “Mother” (Vera Farmiga). But our favorite character has to be “Emma,” played by British pixie Olivia Cooke, who has a crush on Norman that everyone can see — except Norman! He’s too busy fantasizing over his beautiful — and seriously creepy — teacher (Keegan Connor Tracy). Moved to the modern day for some reason, but still a fun ride.

Want to watch something different? This drama, told in flashbacks and set in WWII New Mexico, focuses on an elderly medicine woman and a young boy, torn over the loss of family and friends to the war. She quietly shows him how his Mexican heritage binds families together, giving them a sense of place in this world … and beyond. Ultimately, he comes to understand the love and beauty that life has to offer if you can open yourself to the experience. Very, very nice.

DOCTOR WHO: THE ICE WARRIORS

This sequence comes from 1967, with Patrick Troutman as the redoubtable Doctor, traveling with kilted Jamie and cute little Victoria, landing on a future Ice Age Earth, just as the Earthlings discover an alien body, frozen deep in the ice. It turns out to be a Martian, from a militaristic race that can survive being frozen. More of the creatures dig out, wishing only to return home, but those pesky humans keep getting in the way! A great outing, made more so because Episodes 2 & 3 — famously lost/destroyed long ago — have been recreated via animation. All six episodes plus more bonus goodies than any release from the series so far. A must-own.

We’ve been pimpin’ this series for so long we don’t know what else to say beyond “buy it!” But we get paid by the word, so: Dennis (Glenn Howerton) and Dee (Kaitlin Olson) crash Catherine Reitman’s wedding, then must decide whether or not to pull the plug on their grandfather — a crazed Nazi. Meanwhile, Frank (Danny DeVito) seems to be losing his mind. Everyone, of course, ends up in therapy. Buy it!

This IMAX look at orbital debris may seem kind of silly at first but has some real meat to it and is surprisingly entertaining. Tom Wilkinson narrates a look at Earth’s geosynchronous orbits, those rings of limited celestial real estate that make satellites and space travel possible, and how they are being lost due to ever-increasing mountains of crap — both natural and, increasingly, man-made. Amazing photography, lively narration and an important message: What more could you want?

SPARTACUS: WAR OF THE DAMNED: THE COMPLETE THIRD SEASON

Season 3 begins with Glaber dead and Spartacus deciding to capture a town to wait out winter and gather his forces for an all-out assault on Rome. Meanwhile, back in Rome, money equals power as wealthy Marcus Crassus allies with a young Julius Caesar to put down the slave rebellion. With lots of blood, sweat, and a weekly flash of titties, as God intended.

You might think that this insanely popular Fox sports-obsessed comedy starring Mark Duplass, Nick Kroll, Katie Aselton and others would be full of dumb jocks, air-headed bimbos, screwy sex and stupid trauma-to-the-groin humor. And you’d be right! But that doesn’t stop it from piling-on: Each episode seems to pick a particular comic “line that should never be crossed,” then proceeds to trample it to dust. Then pee on it. Then wallow in the mud. It’s freackin’ AWESOME! This season’s “Breastalyzer” episode — which includes a breast milk/semen switcheroo — may be its “Citizen Kane.” Just buy it.

TP is at it again, putting his name on nice little comedy-dramas that would be just as good without it. In this one, poorboy Craig Robinson crashes a Hampton’s soiree to ask for Grace Peeples’ (Kerry Washington) hand in marriage. Each of the relatives — David Alan Grier, Melvin Van Peebles, Diahann Carroll, S. Epatha Merkerson, et.al. — have something to say about it. We loved the soundtrack, which includes a version of “Que Sera Sera” by The Lusty Sea Hags.