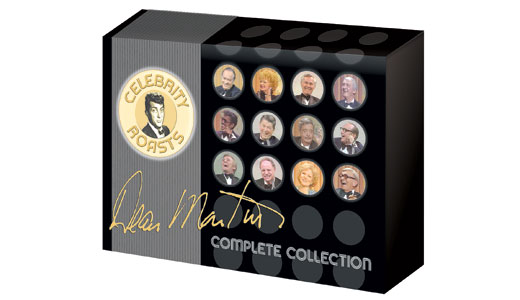 “The Dean Martin Comedy Hour” began in 1965 and was one of the country’s highest-rated TV shows for nearly a decade. But NBC bean counters became rankled at the expense of the aging show, so it was retooled and renamed, changing the format to a cheaper scripted celebrity roast of everyone from Hugh Hefner to Michael Landon. But, oh, the guest stars! The resulting shows form a time capsule of ’60s/’70s American humor: From Hollywood legends to Vegas headliners to New York bortsch-belters, there has never been such a collection of talent. The legendary roster includes such names as Sinatra, Reagan, Kelly, Rickles, Burns, Foxx, Stewart, Wilson, Winters and hundreds more. This set is the first-ever complete release of this milestone in TV comedy; all 54 roasts in a single box set, plus 15 hours of bonus goodies. Available only from DeanRoasts.com — or you can register to win one FREE from StarVista Entertainment, LEO and The Video Tapeworm at VideoTapeWorm.com/video.php. Enjoy.

Robert Downey Jr. continues to amaze in this, his fourth outing as Marvel Comics’ Iron Man, this time up against his (seemingly) most treacherous foe, The Mandarin, played by Ben Kingsley. Gwyneth Paltrow and Don Cheadle return as Pepper and Rhodie, respectively, but Downey’s Tony Stark is a more introspective fellow, subject to panic attacks and moments of complete incapacitation — spending much of the movie outside the suit in a bid to understand his relationship as a man with the various entities trying to control his identity. Our only complaint? Put Jon Favreau back in the director’s chair! A must-own.

An award-winning gay drama about the life of a young Russian man living illegally in NYC who becomes a prostitute in order to survive after the death of his mother. We predict it will be remembered as the breakout film for director/writer/producer/star Pau Masó: a raw and ultimately satisfying journey to the dark fringes of both sanity and society. And watch for exotic beauty Anatoli Grek — one of the most underrated stars in indie cinema, perfectly cast as Dr. Mary. Recommended, but not for everyone.

If you’re tired of the classic “brooding, grumpy old detective” yarns, you’ll love this naturally funny Italian take on the genre starring busy Euro actor Luca Zingaretti, whose shaved head reminds us of a lazy Kojak. He wants nothing more from life than to rut and play in sunny Sicily with good drink, good food and good friends — but those damn people just keep robbing and murdering each other! Each wonderfully odd case is a delight, from the lovely manager of a robbed bank whom Montalbano hopelessly falls in love with (No. 23), to a Mafia grocery store getting ripped off (No. 25), to gun-running thefts and Tunisian refugees (No. 26). Subtitled and recommended.

DOCTOR WHO: SCREAM OF THE SHALKA

This is the infamous “officially unofficial” animated miniseries that lasted only six episodes, featuring Richard E. Grant as the “first” 9th Doctor. Originally created as a web series, it puts the avuncular Timelords back on the celestial map, instructing The Doctor to save a small English town that has been taken over by a race of snaky, screaming lava-men who crawl from a New Zealand volcano — with help from Derek Jacobi as The Master! As far as we can tell, it’s never been seen on American TV.

Lovely Hadas Yaron looks every inch the perfect young bride in this international award-winning tale of a Hasidic Jew in Tel Aviv being redirected into an arranged marriage with a recent widower, 10 years her elder, with a baby boy. But this isn’t a tale of cruel oppression, as American audiences would expect, but an intimate look inside another culture. And the woman involved is maturely considering how this will affect her family, her community and, finally, herself. A bit troubling to our sensibilities, but a true journey of discovery.

This three-disc set is actually Season 8 of the long-running, powerhouse Limey homeland-espionage series starring Michael “My Week with Marilyn” Kitchen and the wonderfully named Honeysuckle Weeks. Now set in post-WWII Britain, the season starts with a bang as Los Alamos scientists set off an atomic blast and news reaches Foyle that a group of Soviet sympathizers are hell bent on stealing England’s nuclear secrets. The rest of the year is a frantic, deadly chase to uncover the Russian menace, regardless of how high in political power it may have spread. Of course, those pesky Nazis haven’t really left the scene, either, now have they? Terrific TV.

This underrated little John Carpenter horror is a guilty pleasure of ours. The ever-oily Donald Pleasence sweats his way through a convoluted tale of evil lime-flavored Kool-Aid, quantum Satanic formulae, time-traveling radio transmissions and demonic insects with rocker Alice Cooper as “Street Schizo.” Now in a long-overdue Blu-ray Collector’s Edition with tons of great bonus goodies.

Hitchcock was long gone from the scene when Tony Perkins returned to his character of Bates Motel proprietor Norman, no longer considered a threat to society despite the fact that he fantasizes about killing — and keeps a skeleton at home dressed as his mother. Into this cesspool plunges new assistant Jeff Fahey, and Diana Scarwid as a former nun (we’ve resisted the urge to call her “de-robed,” but you do get to see her butt). Can’t be compared with the original in any way, but as a stand-alone example of the ’80s slasher genre, it holds up pretty well. Now in a bonus-laden Collector’s Edition on DVD and Blu-ray.

Dolph Lundgren and Billy Zane headline this mob-family-revenge thriller. Zane is sent to prison for a crime he didn’t commit, and, on his release, heads for the straight life. But the new mafioso in town still wants to screw with him a bit, leaving him only one alternative: get some muscle (Lundgren) and turn the tables. A fun shoot-’em-up with gunsel-vets Vinnie Jones, Robert Davi and Gianni Capaldi.

I SPIT ON YOUR GRAVE 2

The original 1978 “Grave” (aka “The Day of the Woman”) was a shockingly raw groundbreaking film: the world’s first explicit rape-revenge movie. The 2010 remake was a more polished effort that added a hick sheriff to the mix — and has better actors — making “Which is the better film?” a tough call. This sequel (or more correctly: this reboot) goes international, kidnapping model Jemma Dallender and taking her to Bulgaria where she turns the tables on her rapist captors. Yes, it is still shocking and brutal and, in a disturbing way, empowering.

Idris “The Wire” Elba walks like a lion through the third season (actually, a mini-series) of this truly frightening cop drama from the BBC. He is John Luther, a dedicated homicide detective whose psychological studies of aberrant criminal minds has taken its toll. While on the track of a particularly evil butcher of young women, he is transferred to another case, setting in motion an act that makes him question his own sanity and sets his once-faithful team against him. Elba won a Golden Globe for his portrayal of Luther, which makes this abbreviated season (four episodes instead of the usual 16-20) all the more upsetting. Don’t miss this for any reason.

These are the final six episodes (No. 49-54) of this wildly entertaining French detective series based on the novels of Georges Simenon set in 1950s Paris. Bruno Cremer plays the title character, a nearly silent investigator with Sherlockian powers of observation and deduction that never fail to thrill. The series wraps up in style with “Maigret at the Etoile du Nord,” investigating a man’s murder at a hotel where the detective meets a beautiful prostitute — or is she? And if she’s not a prostitute, why pretend to be one? Enthralling, addictive and clever.

It’s had to believe that “South Park” has now been with us for 16 freakin’ years, but Matt Stone and Trey Parker are still churning out the freshest, most subversive comedy in TV history. This season starts off with the TSA getting involved after a woman gets stuck in a toilet because the boys leave the seat up, though “Jewpacabra” may be our favorite episode. Hey! It’s “South Park,” what more could you possibly need to know?

THE HOLLOW CROWN: THE COMPLETE SERIES

We don’t know why this didn’t get better press in the U.S., because we thought it was great. Sam “Skyfall” Mendes created these veddy-veddy British, big-budget adaptations of Shakespeare’s “Henriad” tales for the BBC: King Richard II; King Henry IV, Part 1 and 2; and King Henry V — with the casts of the gods! Why should you care? Because you can trace all of TV’s recent plague of sword-and-sex series back to these works. A Who’s Who of English thesps bring to life true, world-altering tales of power, family, fornication and betrayal.

Not to be confused with the 1976 Robert DeNiro crime drama of the same name, this features Chow Yun-Fat as a man railroaded into prison by police chief Sammo Hung. He escapes and seeks revenge by becoming a powerful mob boss. Behind it all is, of course, a woman (drop-dead gorgeous Monica Mok), now quietly married to a writer and living the good life. A very underrated film set in 1900s Shanghai.

WAR OF THE BUTTONS

This French version of Louis Pergaud’s war allegory novel suffers in comparison, but is still quite entertaining. A pair of kid-gangs play a traditional make-believe war during the Occupied France years of WWII. One of their leaders, Lebrac (Jean Texier), enjoys this “play,” but his affection for Violette, a secretly Jewish girl hiding from the Nazis, causes him to reconsider the nature of war and man. Oh, and watch for the character of Simone, played by Dolce E Gabbana model Laetitia Casta. Way to go, God!

The heartbreaking tale of a closeted gay Mexican boy, picking grapes with his family in the Coachella Valley. He suffers in silence, knowing his abusive father would never accept the truth about his son, but it all comes out when he falls for … his sister’s boyfriend! The cast of largely local, non-pro actors brings a spark of reality to the screen such as we’ve rarely seen; deserves a wider audience.

YOU DON’T NEED FEET TO DANCE

An uplifting look at Sidiki Conde: polio victim, immigrant, NYC booster and undeniable force of nature. Losing the use of his legs as a teen, Conde nonetheless sings, drums, climbs to/from his fifth-floor walkup, rides a bike through treacherous traffic — with his hands — and teaches disabled kids how to excel, all with such a joy of life that you can’t help but be moved. Oh yeah: He also dances. Upside-down. On his hands. On the sidewalk. Quite a guy.