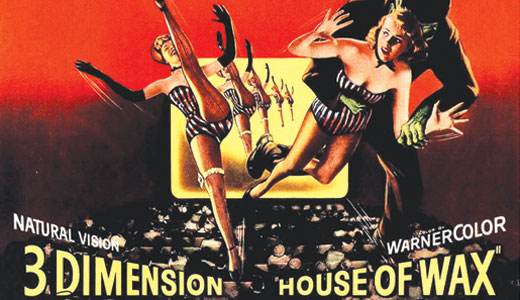 Finally available on Blu-ray 3-D, the best 3-D horror flick ever made — and the best movie ever made by a one-eyed director! (Think about it.) A tremendous hit when released in 1953, it made a horror icon out of Vincent Price and was the inspiration for SCTV’s outrageous “Dr. Tongue’s 3-D House of Slave Chicks” bit back in the ’70s. Co-stars young Carolyn Jones as a hot Joan of Arc, lovely Phyllis Kirk as Price’s would-be candlestick and Charles Bronson as the mute brute. An absolute must-own even if you don’t have a 3-D player: a clear, brilliant 1080p conversion with tons of new bonus goodies, plus a copy of the 1933 b&w Fay Wray original. Duck! Here comes the flying paddleball! Whack! Woosh! Eeyah!

A long-overdue Blu-ray set of the original “Amityville” flicks, including a first-ever full 3-D release of, uh, “Amityville 3-D.” The 1979 original was a worldwide phenomenon that so scared the crap out of audiences that stars James Brolin and Margot Kidder had difficulty finding work afterward. The 1982 sequel, “Amityville II: The Possession,” starred Burt “Rocky” Young and had much the same formula but picked up tricks from both “The Exorcist” and “Evil Dead.” The next year, “3-D” had lots of in-your-face fun with a team of investigators poking the demon in the basement, and a cast that included Lori Loughlin (“Full House”) and Meg Ryan. Beautiful prints and great features make this a Halloween must.

CHINA BEACH: THE COMPLETE SEASON ONE

Finally available in local vidstores, “China Beach” was long delayed due to copyright battles over the awesome ’50s-’70s soundtrack that drove every episode. Dana Delany, Nan Woods, Chloe Webb, Marg Helgenberger and Michael Boatman offer a distaff look at the Vietnam war from inside the “Five and Dime”: the 510th Evacuation Hospital and R&R Center. Simply put: One of the finest shows ever to grace the tube. This three-disc set includes the two-hour pilot, all six 1988 episodes, a new featurette on the inspiration for the show, and a host of truly entertaining extras including the 25-year cast reunion. Buy two.

A fun, low-rent follow-up to the “Fright Night” reboot, with Jaime Murray as a sexy professor who (literally) moonlights as a vampire. This comes to light when a group of American high-schoolers studying in Romania (don’t ask) gets attacked, sending Will Payne and Chris Waller on the hunt, knowing the demon’s ultimate target is Will’s virginal ex-girlfriend, blonde knockout Sacha Parkinson. Lively, energetic and simple-minded — it’s the perfect date!

FROM HERE TO ETERNITY

The word “classic” doesn’t do justice to this legendary film, now available on Blu-ray. Montgomery Clift and Frank Sinatra are soldiers battling authority and personal demons in Hawaii while oh-so-wholesome Donna Reed does naughty business in a bawdy house, and Burt Lancaster and Deborah Kerr enjoy a steamy illicit affair — which includes that oft-seen shot of two lovers rolling in a beach embrace as the tide washes them away. None of them know that the Japanese are about to attack Pearl Harbor. Winner of eight Oscars including Best Picture and Director.

Wow! Guy Pierce (who we usually avoid) is awesome as the titular Australian former attorney who now inhabits the urine-soaked backstreets of Melbourne in these two blistering TV movies based on the books of Peter Temple. In “Bad Debts,” he loses his wife to his own incompetence, diving into the forgetfulness of drink until a chance at redemption appears in the form of a murdered ex-client. The second is “Black Tide,” which draws him into the unknown world of his father after a family friend’s son goes missing. Both are dark, powerful, very real and very intense; our highest recommendation.

Let’s just say it: Zooey Deschanel is damn hot. We know, that’s not PC, but whachagonnado? Season 2 finds her and Jake Johnson’s goofy relationship getting progressively closer, though something always keeps them from bumping uglies — until Episode 23! That’s the infamous “Virgins” episode where everyone tells how they lost their cherry; one of the funniest, sexiest things we ever saw on broadcast TV — and there’s a longer, more explicit for-DVD-only cut in this video release. Otherwise, the rest of the cast treads water while CeCe deals with a prearranged marriage back home; Schmidt and Winston largely run comic interference.

This Dreamworks animated tale of caveman life works by sticking to a simple formula: Any gag worth doing once is worth doing again. And again and again until you can hear it coming — which just keeps getting funnier! Nick “No Talent” Cage voices the father, who must take his family on a scary trek when their comfy cave gets repossessed by Mother Nature. Emma Stone, Ryan Reynolds and Catherine Keener are all terrific as the wife and kids, but it’s Cloris Leachman’s continual “I’m not dead yet!” that’ll have you peeing your pants. Lots of fun and funny insights into the human experience. Don’t miss it.

THIS IS THE END

Six drinking buddies — James Franco, Seth Rogen, Jonah Hill, Jay Baruchel, Craig “The Office” Robinson and Danny “Eastbound & Down” McBride — portray their own whiny, pissy little status-hungry actor selves, bound together by fate when the Armageddon reaches L.A. in this screwy comedy. Wonderfully crude, filled with wanker jokes, drug overloads, serious discussions on cannibalism, and that feeling you get when you’re in a tightly crowded elevator and you really have to fart. Lots of great cameos, spectacular special effects and an off-the-wall musical number. Wonderful.

A more complete listing and your last chance to win a set of “Dean Martin Celebrity Roasts: Complete Collection” at videotapeworm.com.

BEAUTY & THE BEAST: THE FIRST SEASON

There have been several TV treatments inspired by the classic tale, including a popular 1987 version with Ron Perlman as the romantically hideous hirsute monster. But this is from the CW, so everyone must, of course, be gorgeous — especially Jay Ryan as the “monster” who only becomes a beast when he is aroused or enraged. Kristin “Smallville” Kreuk is kinda wimpy as the Beauty — more commonly played as a strong character — but for some reason the whole thing works. Why? Maybe it serves as a metaphor for the dangerous, burgeoning sexual urges of the target audience. But what do we know? Surprisingly entertaining.

This is a six-disc subset of the monstrous Complete Collection, a time capsule of ’60s-70s TV comedy (which we are giving away at videotapeworm.com). These 12 roasts are rife with appearances by such comic luminaries as Betty White, Jackie Mason, Ruth Buzzi, Tim Conway, Rich Little and Don Rickles. A steal at this price.

DOCTOR WHO: THE COMPLETE SEVENTH SERIES

These 13 episodes mark the end of the extremely popular Matt Smith era, starting with companion Karen Gillan, whose cute legs were always on display, and ending with extraordinary beauty Jenna-Louise Coleman as his final companion, Clara. Also included are two welcome Christmas specials, “The Doctor, The Widow and The Wardrobe” and “The Snowmen,” plus a smattering of fun special features. As true Whovians know, there is at least one more Matt Smith “Doctor” coming: The wildly anticipated 50th Anniversary Special with Matt, John Hurt, and David Tennant as different incarnations of The Doctor, crossing his own time-stream, with many of the past companions in attendance. How can you resist?

Strike up the band! Let’s celebrate the 35th Anniversary Blu-ray edition of the best damn horror movie ever lensed! John Carpenter made film history with this perfectly balanced, minimalist exploration of primal fear that gave the boogeyman a new shape and redefined both the horror film and the holiday for decades to come. Chock full of new bonus goodies and Jamie Lee Curitis. Does anything more really need to be said? A must own.

We loved this show, but season 5 was its swan song. For those who missed it: Timothy Hutton is a former insurance investigator who hires/coerces a colorful crew of “former” criminals to join him in his quest to level the playing field for put-upon people, often in the clutches of a big corporation. The team includes Gina Bellman, the grifter, hard and sweet as a Heath bar; Christian “Angel” Kane, drop-dead hilarious as the muscle; Beth Riesgraf as a comely master thief and ldis Hodge as their tech support. Great scripts reminiscent of “The Sting”, rich characters and a sense of justice made this addictive.

Ed “Al Bundy” O’Neill, Ty Burrell, Julie Bowen and Sofía Vergara return in this seriously demented series from Fox about a trio of “average” families — a gay couple, a cul-de-sac stereotype and an American man with a Columbian wife and son — now with a new baby in the mix! Similar in tone to “The Office” (the good British version, not the crappy American one) it has a winsome made-up-as-we-go documentary feel, and co-stars the jaw-dropping Sarah Hyland from “Lipstick Jungle” as Hayley.

“Showgirls” was not only the name of that infamous ode to nudity and bad taste starring Elizabeth Berkley and Gina Gershon, but also a concise synopsis of the plot! (“Show girls,” get it?) This unofficial sequel stars Rena Riffel — who appeared in the original as well as about 50 other movies and TV shows — as “Penny Slot,” a Vegas stripper who takes ballet classes to become a real dancer on TV. But, as the tagline says, “How bad does she want it?” Frankly, this is pretty bad, but certainly no worse than the 1995 original, and Rena still looks damn good.

THE KINGS OF SUMMER

This Sundance hit, aka “Toy’s House,” is an oddly natural look at growing up, starring a trio of attractive, goofy, quirky male friends (i.e., “real teens”) who decide to escape society’s tyranny by building a cabin in the woods and living off the land, free from all shackles. But (spoiler!) those shackles start to look pretty good when drop-dead gorgeous Erin Moriarty walks by! The character of Biaggio, played by newcomer Moises Arias, is a particular delight. Recommended.

The venerable Terence Stamp teams up with equally legendary Vanessa Redgrave in this tale of a grumbling old man who gets bounced back into life via a seniors singing group. There he develops a crush on the group’s hot young leader, Gemma Arterton (in your dreams, old man), reawakening his joy for life. Good stuff!

Aka “S-VHS,” this is a sequel to 2012’s less-than-well-reviewed found-footage horror anthology. Again using the “haunted VHS tape collection” plot device, this time we get five far more coherent and entertaining segments with a crackling cast that includes Mindy “Super Nerd” Robinson, current owner of the greatest tits on the planet. Our favorite tale is “Slumber Party Alien Abduction,” a screw-you to found-footage, nightie-clad massacres — and they mount the requisite vidcam on … a dog. Not kidding! And it’s a terrfic plot device! All are gory and morbid, as God intended.