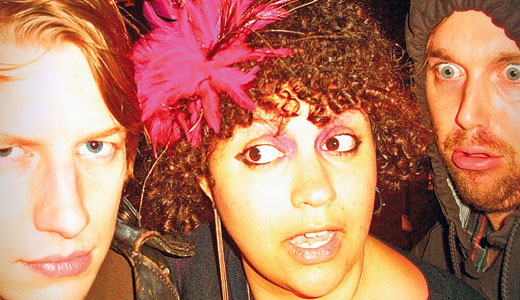 The Cell Phones deliver a poppy and spunky, refreshing approach to punk. Front woman Lindsey Charles’ penetrating vocals share the spotlight with a powerhouse rhythm section in a lean, guitarless trio deserving of an arena-sized audience.

LEO asked Charles to discuss the songs on their album, Get You Alone.

Obviously, this is about my period … When (bassist) Ryan (Szeszycki) was writing this one, he wanted me to sing about something very frustrating to me … My friend Kelly has been pumping this jam for her as-yet-unborn baby girl. I hope she exits the womb with a sense of confidence regarding her future menstrual cycle.

I guess now’s a good time to mention that Ryan is my fiancé … When we were first dating-and-being-in-a-band, all I wanted to do was write love songs lightly inspired by him. Lightly! But he’d be all, “Don’t write songs about me! That’s gross girly stuff!” So I got crazy meta and wrote a song about how he didn’t want me to write songs about him.

This is one of the first, or the first song we ever wrote together … It’s a sexy song that personifies a French door.

We love this song the most … It’s just a fun song about the bulk of my high school and college relationships: me falling very hard in love and trying way too hard to get boys to like me, mostly failing.

Song about Ryan alert! I never got the chance to meet the girl Ryan was dating before me … which is probably a good thing? But if I could meet her, this song is exactly what I’d say.

We love us some Halloween … Those in the audience that dig our grindcore side the most go bonkers when we play it. Super fun to play, but if I had to scream like that for more than half a minute, I’d be dead.

Ahhh, the ballad. We don’t play this as much as I’d like! It’s a cinematic thriller premise: A woman kills her husband, escapes into the night. I guess. It’s Ryan’s suspenseful riff and Justin’s sharp drums that made me want to write something so tense and dark, while still keeping it pretty.

One particularly terrible winter in Chicago, I was listening to Wavves and Best Coast and all that other sunny California music that Pitchfork was creaming over and, heck, maybe it was my period, but I got so upset and jealous of their perpetually pleasant weather that I wrote this song. We’re also big fans of doo-wop and girl groups, and that’s pretty sunny music, so we played with some of that, too. Maybe it’s my immense love for the Midwest, but I find myself dissing both the East and West Coasts frequently.

That’s pronounced “Ka-ching!” … This song is about how broke we often feel around here, and about the possible joy of having a sugar daddy.

Ryan wanted a song about leaving Earth for something better. “Out” is an epic, for sure. Every time we finish playing it on stage, we feel pretty spent. It definitely shows off how tight Ryan and Justin are together. They’ve been playing since they were in middle school together, so they’ve had a long time to become a mean-ass rhythm section. Makes me feel awfully lucky.

The Cell Phones with Julie of the Wolves