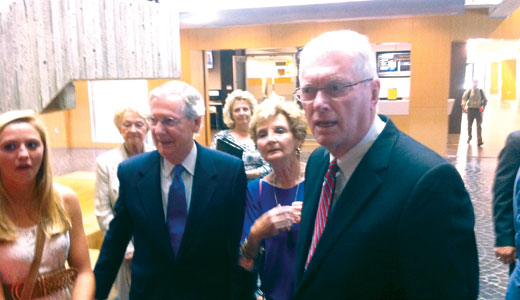 The Supreme Court will hear oral arguments next month in the case of McCutcheon vs. FEC, which some say could be the next Citizens United decision, opening the spigot for even more campaign money flooding federal elections.

On Tuesday, Rep. Julie Raque Adams announced her intention to run for Denton’s vacant seat, for which she’ll be the strong frontrunner. Though former councilman and almost-mayor Hal Heiner lives in the same district, all indications are that Heiner is firmly focused on a bigger prize: the 2015 GOP nomination for governor.

Metro Council president Jim King announced at the Louisville Arena Authority board meeting on Monday that he would propose a Council ordinance this week to decrease the size of the Yum! Center TIF district from six square miles to two. Sales tax increases from the district are supposed to fund most of the debt payments from the construction of the downtown arena, but they have woefully underperformed so far.

King says a study commissioned by the state shows that lagging revenue from the 2-6-mile radius is dragging down total returns, with the new boundaries expected to increase TIF revenue by approximately $1 million.

However, the TIF district will need much more than that additional amount to meet projected TIF revenue. King hopes the yearly TIF revenue figures released this month will be $5 million, just over half the original 2008 projection for the year. The projection of more than $20 million in TIF revenue for 2018 shows that this figure would have to quadruple in just five years.

All of which brings to mind this quote from Arena Authority mastermind Jim Host to LEO’s Sarah Kelley in 2008 when she questioned the TIF district’s abnormally large size: “All we did was take the existing legislation and use it to the maximum. Why wouldn’t we?”

It turns out he was wrong about a host of things.

Sen. Mitch McConnell visited Northern Kentucky University last Friday to deliver a lecture on the career of the man he helped force into retirement in 2009: former U.S. Sen. Jim Bunning.

Many expected Bunning — who first told LEO last month that he is undecided on who he’ll support in McConnell’s GOP Senate primary next year — to forgive, forget and endorse McConnell at the gathering when the lecture was first announced. Before McConnell spoke, former Bunning staffer Rick Robinson told LEO that if this happened, “Hell would freeze over.”

McConnell gave effusive praise to Bunning’s willingness to stand by his principles, repeatedly noting that Bunning’s trademark was “standing alone” against angry opponents, whether on the mound as pitcher or as a senator — adding his penchant for “throwing chin music.” McConnell said that Bunning “inspired loyalty” among his colleagues and was “a Hall of Famer in life,” as well as baseball.

After the speech, Bunning sarcastically muttered, “Kind of flowery, wasn’t it?” while passing reporters. He later declined to take questions, saying, “I don’t have to talk to the press anymore. It’s so nice, you can’t believe it.”

There was no endorsement, hell didn’t freeze over, and Bunning continues to stand alone.