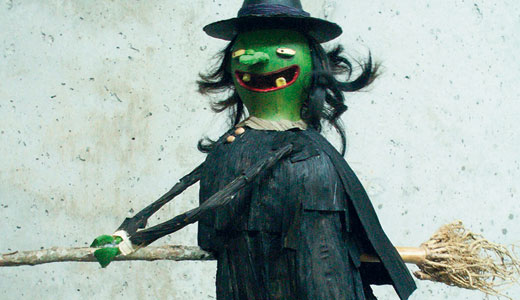 Joshua Mason lives in the Appalachian city of Elkhorn, Ky., where he likely uses his time more wisely than any other resident of the town of 1,060 or so (unless they’re whitewater rafting, an even more popular activity than producing outsider art). Louisvillians can only otherwise see Mason’s works at kreepykentucky.com, a catchy and suitable handle for an artist who specializes in gourds and pyrography (you know, pyro = fire, so art made through wood burning). Oh, and those gourds! It may be early for Halloween, but you’ll get thrills and chills from seeing what this multi-talented artist (who also makes paintings and tattoos ranging from the cute to the chilling) can do. Admission is free. —Peter Berkowitz

‘The Stranger and Ludlow Quinn’

Dark magicians, sinister secrets, a supernatural history obscured by legend — this is Louisville as you’ve never seen it before. Theatre [502] presents Chapter Four of “The Stranger and Ludlow Quinn,” their spooky and spellbinding tale of Louisville’s magical alter-ego. Told in 10-15-minute chapters at each month’s First Friday Trolley Hop, the play follows local teen Bonnie Burke, who finds herself caught in a mysterious web of sorcery and secrecy spun by legendary magician Ludlow Quinn. This is the fourth of 12 installments, all of which will culminate in a new, full-length play next spring. Co-artistic director Gil Reyes raves, “Response to this project has been overwhelming. The most rewarding part, though, is hearing how engaged the audiences are and how excited they are for the next installment. They’re hooked.” Chapter Four also features a pre-show performance by Louisville Magic Club president Jim “Uncle Red” Harris. —Jennifer Harlan

As summer winds down, it’s important to enjoy sunshine and breezes while you can. Sailing for a Cure Foundation and Gilda’s Club, which supports children and adults with cancer, makes that easy this weekend with three days of sailboat races and outdoor entertainment. More than 30 vessels will participate, each with someone whose life has been touched by cancer as an honorary first mate. Supporters can watch from Waterfront Park, where live bands, drum circles and arts and craft booths provide additional activities. Admission is free, but they’re trying to raise more than $40,000, so donate a dollar or bid on a silent auction item. —April Corbin

Saturday’s Downs After Dark: College Rivalry Night highlights opening weekend of the first-ever September race meeting (Sept. 6-29) at Churchill Downs. Fans are encouraged to don the colors of their favorite college team, and a total of $10,000 in scholarship funding will be awarded to the top three colleges noted by fans as they enter. One suspects red and maroon will be well represented, with the University of Louisville playing Eastern Kentucky in football at nearby Cardinal Stadium at noon that day. Saturday’s 11-race card includes four stakes, headed by the Iroquois, which kicks off the Road to the Kentucky Derby points series. The Iroquois, for 2-year-old colts, and the Pocahontas, for fillies, also serve as “Win and You’re In” qualifiers for the Breeders’ Cup in November at Santa Anita. A second Downs After Dark is scheduled for Sept. 28. —Bill Doolittle

Life may be a cabaret, but how many of us actually live that way? Especially outside of Berlin. Though we don’t claim to know how Chicagoan Ami Sariya spends her days when she’s off stage, the singer/guitarist/accordionist has put together a top-shelf band, The Outcome, including violinist Ronnie Kuller and guitarist Gary Kalar (who also play in the world’s greatest band, Mucca Pazza). Pretend that Zanzabar is a Parisian café you’re sneaking away to on Saturday and let the magicians work. About their latest album, Soundproof Box (which featured the inevitable classic, “I’m Pregnant”), My Old Kentucky Blog declared, “I’m in the presence of greatness.” And $8 sounds like a pretty good deal now, eh? Nellie Pearl opens. —Peter Berkowitz

I’m ready for autumn, when the weather cools and the annual art fairs begin. One of the first is the September Art Fair at the Mellwood Arts & Entertainment Center. This year it runs Sept. 7-8 from 10 a.m.-6 p.m., and features Mellwood’s 200 resident artists with an additional 150 juried artisans. “The Art of the Quilt” will open during the September Art Fair. This exhibition of 24 quilts is by artists from Vermont, Pennsylvania and Texas as well as Kentucky. Mellwood organized the show. Realizing that their gallery would only hold so much, they limited the number of artists but allowed each to show six pieces. The result is an exhibition that highlights the style(s) of the individuals as well as the variety among textile and fiber artists. —Jo Anne Triplett

“Most of us cut ourselves off from the forces and rhythms of nature, and that has been very dangerous, because when you play with nature and try to manipulate nature, inevitably you will be crushed.” This is how the trailer for the documentary “Fall and Winter” begins, but it’s not all doom and gloom, I promise. Canadian filmmaker Matthew Anderson went on a cross-country journey in search of what is causing our unfolding global crisis and examined if pollution, droughts and diminishing resources are threatening our time here on Earth. It took Anderson two years to make, and he traveled more than 16,000 miles to showcase the environmental destruction and urban wastelands in the United States. He also talked to many progressive thinkers — from anthropologists and architects to psychologists and journalists. Anderson will be present at Sunday’s free screening at the Clifton Center. —Sara Havens

Now is the time to turn your ears toward future-bass producer Zach Saginaw, better known as Shigeto. With the recent release of his latest full-length, No Better Time Than Now, the Detroit-based beatsmith is poised to corner the market on sleek, jazz-infused instrumental hip-hop, a style once monopolized by Flying Lotus and his Brainfeeder crew. Joining Shigeto on the road is Beacon, a duo specializing in spacious R&B that marries feather-light vocals with eardrum-smashing bass. And opener Heathered Pearls is sure to dazzle with his dizzying, kaleidoscopic take on disco. If you want to hear what the future of beat-oriented electronic music sounds like, Zanzabar is the place to be on Sunday night. —Sam Benanti

From Austin, Texas, as seen on their “No Reservations” episode, Whiskey Shivers just might have aced an obvious yet hard-to-master approach to music. On the one hand, they’ve got a modern, rock attitude-fueled version of bluegrass goin’ on that won’t sound foreign to fans of the Avetts or the Old Crows; on the other, they sound like they would be just as happy in a dirty bar, singing along to Pogues songs or truck driver songs. The result is the type of music guaranteed to put a smile on your face; you can bring Mom as your date just as easily as you can bring a toothless drifter, and a good time will be had by all. —Peter Berkowitz

Popularity is an intriguing thing. It has given us awkward teenage years, presidents and Facebook “likes.” When the Louisville Visual Art Association started Artebella a few years back, they hoped it would become popular. The email and website program that daily showcases the work of a Louisville-area artist, has become a bona fide hit. “By the Numbers” is a show of their most popular Artebella artists. The featured 16, including local greats Carlos Gamez de Francisco, Claudia Hammer and Douglas Miller (their next “Food for Thought” speaker on Sept. 10), were chosen by “web and crowdsourcing-based analytics,” meaning how many clicks an artist received and how long the viewer spent on the page. A reception will be held during the Sept. 6 First Friday Trolley Hop. —Jo Anne Triplett