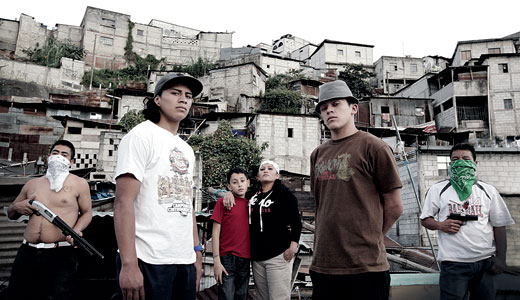 As America grows closer to lobbing bombs at yet another country full of Muslims in the eastern hemisphere, the World Affairs Council of Kentucky and Southern Indiana will host an expert who is well-versed in the non-military battles of the now 12-year “War of Terror.” John Cassara — an author who spent 26 years as a government intelligence officer and tracked down terrorism financing at the Treasury Department — will speak about how al Qaeda bypassed our financial reporting safeguards during 9/11, which terrorist groups currently have the most power, and how those groups use donations and criminal activity such as fraud, ransom and trafficking to finance their operations. —Joe Sonka

Guatemalan street culture comes alive in “BBOY for LIFE,” a documentary about the thriving world of hip-hop dance in Central America and the violent gangs that surround and threaten them. Produced by Louisville-based production company Nadus Films and partially funded by a Kickstarter campaign, “BBOY for LIFE” follows two dancers, Cheez and Gato, and Leidy, a gang member who makes the harrowing decision to leave her gang. Producers have promoted it as more cinematic storytelling than dry documentary, and they back the claim up with an online trailer of sweeping urban landscapes and beautiful slow-motion headspins, windmills and backflips. The film has already been picked up for worldwide distribution. It premieres tonight and will be followed by a Skype call with one of the central characters. —April Corbin

It’s a rare local club show for prolific experimental music veteran Tom Carter. The Southern-born New York resident first became known in the ’90s for his sounds with the duo Charalambides, and he has collaborated with everyone from Ben Chasny to Thurston Moore and Steve Gunn. His recent work has also seen him working with filmmakers pairing visuals with his sonics, and he’s been working on two albums to be released next year. His bio shares that he learned his guitar skills “with unreliable instruments, cranky analog electronics, and disintegrating practice amps.” Kindred Kentucky spirits New Mother Nature and the duo of Jonathan Wood and Lowe Sutherland also share the bill, along with Irish guitar futurist Cian Nugent. —Peter Berkowitz

“It started with a carrot.” From rabbit food to rhubarb pandowdy, Deborah Madison’s latest cookbook, “Vegetable Literacy,” delves deep into the greenest of food groups, exploring the families that make up the vegetable spectrum and proposing new ways to turn your radishes and roots into interesting fare. The vegetarian authority takes botany to a delicious new level, exploring how food science can inform cooking decisions and lead to surprisingly scrumptious pairings. The table of contents is mouthwatering, from carrot soup with tangled collard greens in coconut butter and dukkah, to sweet potato flan with maple yogurt and candied pecans. But Madison doesn’t just tell it like it is: Come let her, and eight of Louisville’s best female chefs, show you how it’s done at this dinner, sponsored by Slow Food Bluegrass. We guarantee you’ll want to eat your veggies. —Jennifer Harlan

Think Back, Kick a Beer is the new four-song, eight-minute EP by the ever-adventurous trio Tropical Trash, and they’re celebrating it with their friends in, well, some kind of style. Neighbors White Reaper open with their basement scuzz rock, a fine protein that pairs well with the Philadelphia-based Lantern, touring on their recent release, Rock ’n’ Roll Rorschach. They tell us, “Lantern is what rock ’n’ roll was — loud, oozy, inspiring, perspiring, pummeling directly forward yet cloaked in the arcane.” The kind of band that can make a sax work for them, alongside a cutting guitar riff and a seasick synth — all at once — Lantern is a must-see for those who share John Waters’ taste in pop music. —Peter Berkowitz

The Bard’s Town’s third annual Ten-Tucky Festival is ready to give you all the theater you need in rapid-fire bursts. You’ve got eight nights to see eight plays, written and directed by eight Kentucky playwrights. Each play is only 10 minutes long, so it’s perfect for our modern-day attention spans. With plots involving African safaris (“A Day on the Savannah”), feminists (“A Trip to Eden”) and even Eric Clapton making a deal with the devil (“That One Time Eric Clapton Sold His Soul to the Devil”), there’s bound to be something you will like. And as an added bonus, The Bard’s Town has drink service, so go ahead and laugh or cry or order yourself a martini or three. —Sarah Duncan

The movie “Black Swan” gave us a backstage view of readying dancers for a production of “Swan Lake.” While we can only hope the over-the-top drama is not duplicated in the dressing rooms and studios of the Louisville Ballet, what we can expect to see on the Whitney Hall stage will be as riveting as what was on film. Tchaikovsky’s score is one of the most familiar and beloved ballets in modern memory. Bruce Simpson, artistic director of the Louisville Ballet, fine-tuned the choreography in 2000, creating this version “… because Siegfried was one of my favorite roles as a dancer.” Natalia Ashikhmina and Erica De La O will share the parts of Odette/Odile, while Mark Krieger and Kristopher Wojtera will alternate playing Prince Siegfried. —Jo Anne Triplett

Becca and Howie Corbett are living the quintessential American Dream — beautiful house, adorable dog, precocious son — until a tragic accident shatters their world, a toddler-shaped hole punched through their picture-perfect existence. Winner of the 2007 Pulitzer Prize for Drama and the 2006 Tony Award for Best Actress, “Rabbit Hole” follows the parents through their grief, along with Becca’s flighty sister, her boozy mother and the teenage boy who killed their son. It’s dark stuff, yet The New York Times said of the play’s 2006 Broadway production, “The sad, sweet release of ‘Rabbit Hole’ lies precisely in the access it allows to the pain of others, in its meticulously mapped empathy.” With a balance of emotion and levity, “Rabbit Hole” is ultimately about hope. All profits go to the pediatric Cancer Care Treatment Center in Ulaanbaatar, Mongolia and the pediatric oncology wing at Kosair Children’s Hospital. —Jennifer Harlan

If you have any interest in bikes, bands, beer or beautiful women, then the Kentucky Kick Down has your weekend covered. Get yourself out there and sign up for the pool tournament or the Miss Kentucky Kick Down Contest. Walk around with that PBR in hand. Score some local art for your living room. Check out all the ratted-out, chromed-out, pimped-out two-wheeled prides and joys you can handle, and enjoy an art show as well as live music by Trophy Wives, Vice Tricks, Mangrenade and more. The kickoff to Kick Down starts Friday at the Monkey Wrench (1022 Barret Ave.) and Art Sanctuary (1433 S. Shelby St.), followed by all-day festivities at the Barret Bar (1021 Barret Ave.) and Monkey Wrench. —Sarah Duncan

Did you know there are only a handful of spots in the country where you can walk with a drink in hand, strolling from bar to bar, enjoying the life on the street? New Orleans, Vegas, Key West and Memphis’ Beale Street are a few examples. But on Saturday, Baxter will join the outdoor drinking club for just one day as the annual Highlands Fest closes down the road to traffic and opens it up to art vendors, a beer garden and a live music stage. More than 50 arts and crafts booths are already on board, and a covered beer garden is new this year, sponsored by Shock Top. The Debauchees take the stage at 4, followed by The Deloreans (5), A Lion Named Roar (6), and The Pass (9). There’s also a “fun zone” for children, so bring the entire family and eat, drink and be merry. —Sara Havens

While he’s become too successful to spend much time in his hometown of Belfast in Northern Ireland, Ejeca is quickly becoming a house music star. Dropping in on Louisville on an otherwise sleepy Tuesday night, the criminally young mixer also known as Garry McCartney will drop as much knowledge as he’s soaked up about disco, garage, deep house and techno in his mere 23 years with us. Mixmag wrote: “Ejeca ticks all the boxes, basically.” He broke through only last year with the Bicep collab “You” and is now booked to travel everywhere from Ibiza to Detroit this month. Locals Vancington and OK Deejays add to the good vibes, so put down those books and hit the floor. —Peter Berkowitz

In the latest exhibition at Galerie Hertz, there are birds and there are brains. Art Orr falls into the bird category with his inventive birdhouses. “For over a year now, I’ve been making these funky sculptural birdhouses, and I call them my ‘birdbrain houses,’” says Orr. Formerly from Louisville but now living in Florida, he says he’s quite pleased to be showing his newest works in his old hometown. It’s the first show he’s done in Louisville since 2002. Falling on the brain side are Kristina Arnold and Alicia Criswell. Arnold uses her art to further her understanding of public health issues. Criswell is an art therapist who says her work “challenges the viewer to not only look and evaluate but to, more importantly, think, feel and process those feelings.” —Jo Anne Triplett