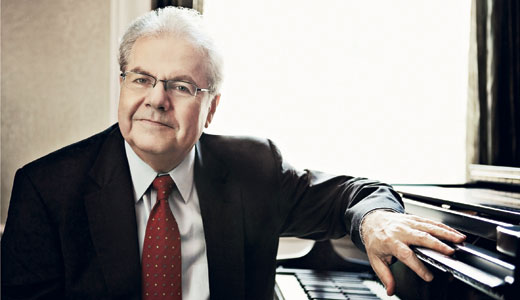 In 1777, Wolfgang Amadeus Mozart wrapped up a career as a child prodigy, touring with his father, and settled in the family hometown of Salzburg, Austria to begin a musical career as an adult. Mozart was 21, and in that first year on his own, his composing skills soared. Among the pieces he penned was the “Piano Concerto No. 9” — which he packed with him when he set off for Mannheim, Germany, and then to Paris, seeking new opportunities as a performer and composer.

Two centuries later, piano virtuosos are still taking the Mozart “Concerto No. 9” on tour. Three weeks ago, internationally renowned pianist Emanuel Ax packed the Koussevitzki Music Shed for a performance of the concerto with the Boston Symphony in the closing concert of the Tanglewood Festival, in Lenox, Mass. And on Saturday in Louisville, Ax will unfurl the Mozart once more for the Louisville Orchestra’s season opening “Fanfara” concert in Whitney Hall. Ax will also perform Beethoven’s “Piano Concerto No. 3,” and the orchestra, under the baton of music director Jorge Mester, adds Dvorak’s “Carnival Overture.”

Ax, of course, possesses an endless playlist from the piano repertoire and claims he doesn’t have a favorite. But he recognizes the “Mozart 9” occupies an important place in musical history, and knows audiences love it — and why.

“Well, it’s very typical of Mozart, very sophisticated,” says Ax. “You listen to it and it sounds very simple and straightforward. But then what makes it interesting is it is actually so sophisticated. It’s sort of like the Dave Matthews Band. I don’t know if you know that band?”

“Well, they are,” continues Ax. “You listen to what’s going on: It’s simple on the surface, complex underneath. Just what makes you want to listen to it more and more.

“The Eagles, the same way,” he adds. “Most things that last I think have that combination of very approachable stuff — with a lot going on in the music so you don’t get bored. I think that’s true in books, probably true in movies.”

In all, Mozart composed 27 piano concertos, numerous concertos for other instruments, 41 symphonies, four operas … well, you get the idea. But the “Piano Concerto No. 9” does represent a bit of a landmark for Mozart — coming in that year of profound change, one of the first of the mature works that mark Mozart’s place in music.

A few years ago, Ax recorded a special radio series with Canadian Broadcasting called “The Concertos According to Manny.” One of the 13 programs is devoted to the “Mozart 9.”

In contrast to the Eagles, say, or the Dave Matthews Band, classical composers seldom bothered dreaming up catchy titles for their tunes. So Mozart’s title for this one, with its Kerkel catalog number, is “Concerto No. 9 in E-Flat Major, K.271.” Not too romantic.

But famous pieces have a way of picking up names. “Mozart No. 9” became known as the “Jeunehomme” (young man). Then, a few years ago, musicologist George Lorenz determined that Mozart actually wished to dedicate the work to a young woman he knew in Vienna named Victoire Jenany. That’s a far more fetching idea, of course, and the piece is now often called “Jenany.”

And if Ax was able to boil the Mozart down to just two words, “very sophisticated,” he needs but one to describe the Beethoven: “Dramatic,” he promises.