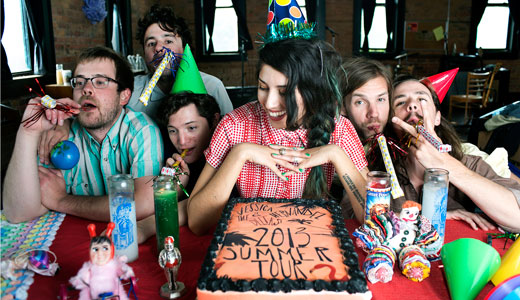 As Jessica Hernandez was readying her full-length debut album for a February 2014 release, she was in El Paso, Texas, finishing the album’s mixing process. Initial problems connecting with LEO’s reporter, she said, were due to the studio being located “on a pecan farm, in the middle of nowhere. It’s hard to use a cell phone out here.”

It’s an example of how far the Detroit native has come in her journey from local popularity to possible Next Big Thing. The first-generation American, whose band describes their sound as “big-indiefolkestraljazz&B,” is the child of parents who own a bakery, and the hardworking singer stood out in the scene in part due to the stage she built in the loft above the bakery, hosting shows by her band and many others.

Another standout feature for the 25-year-old is her voice, a big instrument equal parts soulful, jazzy and rockin’. At 5 feet, 5 inches tall, Hernandez might not look like her body can support such a voice. She’s not hearing what her audience hears, anyway.

“I hear my voice one way, and I’m used to the way it’s always sounded in my head,” she says. “Now, recording a lot, it’s weird to me (hearing it played back). I’m just, like, ‘I don’t sound like that!’” While working on her current record, Hernandez found herself consistently wanting to redo her vocals.

“My producer’s, like, ‘We love you, but you’re fucking crazy. It sounds great, you’re just being weird,’” she laughs. “I’ve had to learn to trust everyone else around me to tell me when it sounds good. It’s the same thing when people hear their voice on a voicemail: ‘That’s not me …’”

She found another solution to her dilemma recently in Pontiac, Mich. The band decided to release a single, with a new song on the “A” side and a Conway Twitty cover on the back, and went to an analog-only studio to record it. Hernandez says, “We went there and recorded live-to-tape, just one take through, and it was such a different experience. There’s just such a warmth to everything: The vocals and the drums and everything just sound so warm, so natural that you wind up not wanting to do anything to it.

“It’s weird,” she continues, “There’s so many imperfections when you’re doing something live and you don’t have the ability to go in and mess with things, but at the same time, it’s so forgiving. The flaws have so much character. Now I only want to record analog (laughs). I’m really dorky about it.”

She’s unable to hide her dorkiness, introducing the song “Young, Dumb & Drunk” on the band’s live EP Live at the Magic Bag by telling the audience, “We’re nervous, too, so don’t be embarrassed to dance or … somethin’ …”

Hernandez and the Deltas got their big break when a Capitol Records radio representative from Detroit passed the band’s CD around to employees at Capitol’s Blue Note division. “Somehow the president of Blue Note got a hold of it and ended up calling me on my cell phone one day,” she says. “We started talking about music, and all about life and everything, and talked for an hour, and then we worked out a plan to see me on my own stage, with our hometown crowd and all that. That ended up being really cool.”

Upon playing a triumphant show in front of all their friends and signing to Blue Note, the Deltas made their album — and then watched as everyone who believed in them lost their jobs after Universal took over the company. “It’s super-stressful over there,” says Hernandez. “I talked to the president of Blue Note about what that meant for me. He was pretty straightforward, saying, ‘I don’t know, because I don’t know who has a job here at this point.’”

Hernandez was lucky, getting the rights to her album back and stopping it from being buried in a vault. Now she’s working on starting her own label to release it. “I’m doing a self-release of the record I recorded with a major-label feel. It’s kind of a cool thing — we had this major label budget and attention to it, and now we’re releasing it as a self-release. It’s kind of a weird thing, but I’m excited for it. And nervous.”