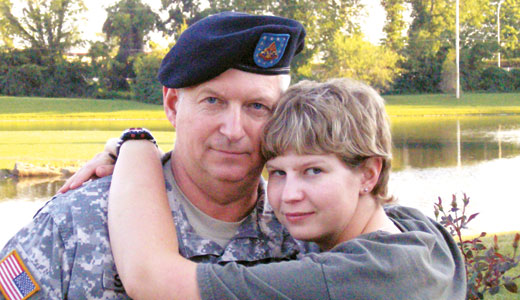 Hannah Sewell and her father

They filled the otherwise silent auditorium. Horror stories — of being ambushed outside the chow hall, of screaming for help in a room with people nearby who could have but didn’t intervene, of remote locations where communication to help was limited, of bruised faces and broken jaws, of threats of demotion and death, of being labeled a drunk slut who was lying. One by one, the soldiers’ stories of sexual assault unfolded through “Invisible War,” an award-winning documentary screened last month at the Muhammad Ali Center as part of its Metamorphosis film series.

Hannah Sewell walked in afterward to speak to the crowd of sniffling, teary-eyed audience members. Sometimes, during events like these, Sewell sits with her partner in the back of the darkened theater, and they make “Mystery Science Theater 3000”-esque commentary to each other during the evasive, bullshit answers given by the military leaders interviewed in the documentary. It’s a dark pastime, sure, but necessary in order to not feel overwhelmed by the weight of the subject matter, which she knows all too well.

As many as 26,000 women and men were raped or sexually assaulted in the military last year. Only 3,374 — about one in seven — reported the incident. That’s a far lower rate of reporting than in the civilian population, where just over half of sexual assaults go unreported.

The reasons for these startling numbers have been known for decades. The military justice system requires members to report such incidents through their chain of command rather than through an independent body. Sometimes, the commanding officer is the rapist. Often, they are friends with the perpetrator. Many times, they are more concerned with what these types of charges will mean for their reputation as leaders than for the wellbeing of the victim. Usually, their training for dealing with sexual assault is minimal or nonexistent.

Advocates have pushed for changes to the military justice system for decades, and the history of the armed forces is pot-marked with scandals. In 1991, dozens of women were reportedly sexually assaulted during a Navy and Marine Corps symposium, including one who recounted in “Invisible War” her experience traversing “the gauntlet,” a hallway lined with drunken men who ripped at her clothes and violated her body. In 1996, it came to light that drill sergeants and other instructors at the Army training facility Aberdeen Proving Ground had made sleeping with young female trainees a game, an abuse of power at best and, at its worst, rape. In 2003, allegations of widespread cover-ups of sexual assault at the Air Force Academy in Colorado led to a survey of cadets that found 12 percent of graduates had been victims of rape or attempted rape.

Over the past decade, the Department of Defense has made dozens of changes to protocol, expanded resources for victims and released public awareness campaigns that urge prevention and encourage victims to speak out. Some have been counterproductive, like the victim-blaming PSA commercial chastising a woman for walking to her room without the protection of a trusted buddy. Others downplay the severity of many of the military’s rape cases, like the failed “ask her when she’s sober” that suggests sexual assault is nothing more than a grey area entered after one too many beers. Some progress has been made. Since the Pentagon established the Sexual Assault Prevention and Response Office (SAPRO) eight years ago, reports have risen by 98 percent.

Charles Lay, a sexual assault response coordinator with the Kentucky National Guard, sat two seats away from Sewell at the Ali Center panel and recapped more of the positive changes. The Kentucky National Guard has stopped issuing waivers for people who want to enlist but have a sexual assault conviction on their record. The DOD expanded requirements for personnel who deal with sexual assault victims. Also, each branch of the military must now establish its own sex crime units, which will be staffed with people trained specifically for working in these cases.

The biggest impact, however, will likely require legislative measures. The Senate is expected to hear a proposal this fall for taking sexual assault investigations and prosecutions away from the military chain of command, something countries like the UK, Australia, Canada and Germany already do. Bipartisan legislation is also in the works for establishing minimum punishments. No more slaps on the wrist in the form of demotions or mandatory training; instead, it could be mandatory hard time. It’s something advocates claim is the only way to make a serious dent in this epidemic. Everything else is plugging bubblegum in a hole on a sinking ship.

Hannah Sewell was raped in 2008 by a fellow recruit in a hotel room. The attack resulted in a pinched nerve in her back and rotated hips that would force her into being medically discharged from the military. Worse, it left her with post-traumatic stress disorder and haunting memories that led to thoughts of suicide. According to one study cited in “Invisible War,” women who were raped in the military have higher rates of PTSD than men who’ve been in combat.

Sewell’s attacker, who after raping her brazenly declared that he now owned her body, was never brought to justice. Sewell chose to report the incident, but it didn’t matter. Like most, her case was dismissed. Officials told her the rape kit, pictures and other records were lost. “Accidents” like that tend to happen. Intimidation is also common. Women report being brought up on adultery charges for being raped by a married man. Military police officers have been told to remind victims of the seriousness of making false rape claims. Women are asked what they were wearing, why they were alone with someone after drinking and other questions that make it clear who’s on trial.

Sewell moved back home to Georgetown, Ky., located outside of Lexington, with her father, Gerald Sewell, a career military man. He, too, is featured in “Invisible War.” In one of the documentary’s most moving scenes, he tearfully recalls the heartbreaking phone call he received from his distraught daughter, who had to tell him she was no longer a virgin, that it had been ripped away from her.

Before she joined, he told her she would be safe.

In the five years since, they have worked through their guilt and emotions together. Sewell no longer has thoughts of committing suicide by hanging herself from a flagpole in hopes her attacker would see and finally understand the pain he caused her. She no longer hates the entire military, only the Navy’s Naval Criminal Investigative Service (commonly referred to as NCIS) and her perpetrator. Sewell is attending college for electrical engineering and working on strengthening her back. Her goal, as shocking as she knows it sounds to most people, is to rejoin the military. “It’s not the military’s fault. There are good people,” she tells LEO. “I can’t fault (the entire organization) for an individual’s mistakes.”

Some say otherwise, arguing the military’s hyper-masculine, be-all-you-can-be marketing and atmosphere encourages rape culture. One study found that 15 percent of Navy recruits had attempted to rape or sexually assault someone prior to entering. That’s twice the rate in the civilian population.

Still, Sewell remains undeterred. In her words: “I want to finish what I started.”