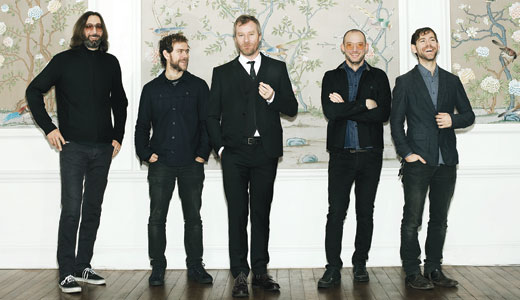 Though none of the Berninger kids were musical while growing up in Cincinnati, their taste as listeners had a profound effect on their personalities. In the 1980s, older sister Rachel was a classic John Hughes character, falling for The Smiths, Violent Femmes and R.E.M. Brother Matt, two years her junior, enjoyed “a typical Midwestern suburban upbringing,” he says, aware of music as entertainment but otherwise disinterested until Rachel’s cassettes changed his life. Youngest brother Tom, born nine years after Matt, turned to heavy metal as his passion, perhaps as a way to define himself apart from his siblings.

This year saw the release of Matt’s band The National’s sixth album, Trouble Will Find Me, which sold almost 75,000 copies in its first week of release. A feature-length documentary about the band, “Mistaken For Strangers,” directed by Tom Berninger, has been playing at festivals, following the metalhead as he travels with his brother’s band.

Matt Berninger says he was attracted to “artsy” music as an awkward teen who felt out of place, in school and in his own body — “like every freshman in high school does …”

Berninger defines himself first now as a writer, and says he’s always been attracted to bands like those for their lyrics first, even above the catchy melodies. “The boldness and the courage, some of the weirdness — I particularly remember the Violent Femmes records, like, ‘I can’t believe he just said that! Wow, he had the guts to say something that’s creepy, that’s sexual, racially ambiguous …’ Morrissey, too, was representing, in a pop song, something silly or pathetic, which I loved,” he continues. “I instantly connected to people who made fun of themselves, and exposed their awkwardness. I think it’s the most direct and potent sort of form of art that I’ve connected to emotionally, as opposed to books or movies or anything.”

As he learned more about how music could speak to him, Berninger added artists like Leonard Cohen, Tom Waits and Nick Cave to his playlists, “and other writer/musician heroes, people who had the courage to be uncool and weird.”

Though today he is known for wearing smart suits on stage, the popular singer says he has always been “thin and gawky … I have a big nose and I would not be described as ‘classically handsome.’ I’m average-to-weird looking.”

He says about many rock musicians, like Keith Richards, The Who and the Ramones, “There’s a lot of dorks who, if they weren’t in rock ’n’ roll … it’s one of the ways dorks can be cool.”

In high school, he says, “I don’t think I was a pretentious douchebag,” but he began to think “more highly of myself … and I started to become more confident.”

Berninger didn’t know his future bandmates, all native Cincinnatians, as kids. He met bassist Scott Devendorf in the early ’90s when they were both attending University of Cincinnati’s College of Design, Architecture, Art and Planning. Their first band, Nancy, was overly inspired by Pavement and Guided By Voices, though it inspired Berninger to take music-making more seriously.

After college, Berninger moved to New York, got a design job, and through Devendorf, hooked up with their future bandmates; Devendorf’s brother Bryan, the drummer, had been playing with twins Aaron Dessner (guitar, keyboards) and Bryce Dessner (guitar) in a different band. Berninger, who is now 42, was already in his late 20s before The National came together.

The members came from different scenes — Bryce Dessner, a serious composer, went to Yale; Aaron is more of a classic singer-songwriter; Bryan Devendorf is a jamband guy. The National’s first two records were the guys trying to figure out who they were together. It took two and a half records, Berninger says, with their Cherry Tree EP, before they nailed it.

It’s been a long, slow rise to the top for a band that saw their early peers — The Strokes, the Yeah Yeah Yeahs and Interpol — find their audiences more easily. In the early days, every mention meant a lot; Berninger still remembers a nice write-up in Buffalo. “We used to call in sick to our day jobs from Europe,” he laughs.

It’s been almost a decade since they didn’t have to work day jobs. Today, 14 years into The National, Matt Berninger says he feels cool.