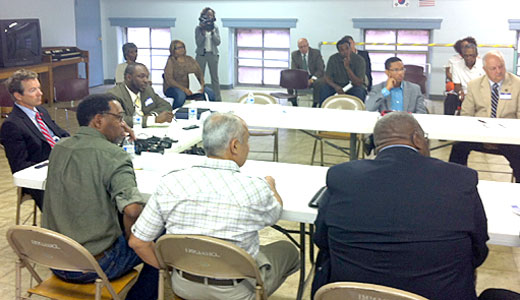 Paul repeatedly emphasized one of his common themes of the past year, criticizing the drug war that has disproportionately damaged this community, as felony drug convictions have made it extremely difficult for ex-offenders to gain employment and transition back into society. He is currently the co-sponsor of federal legislation to do away with mandatory minimums for drug sentences and give judges more leeway.

A new topic of discussion for Paul on Monday was the restoration of voting rights for non-violent felons, announcing that he is working on federal legislation to return these rights — as well as Second Amendment rights — for offenders five years after being released from prison.

Kentucky is one of the most restrictive states in the country when it comes to restoring voting rights for non-violent felons, as each individual needs a direct pardon from the governor. In recent years, legislation to automatically restore such rights (HB 70) has easily passed the House of Kentucky’s General Assembly, but stalled in the Republican-controlled Senate without receiving a hearing or vote.

When asked by a panelist if the senator supported HB 70, Paul said he was unfamiliar with the legislation and would have to read about it. Speaking to reporters after the meeting, Paul said he would be open to talking with Senate Republicans about the bill or testifying in favor of it, adding that perhaps a compromise could be reached on how soon those rights would be restored.

Paul was well received at the small meeting — media outnumbered the citizens who attended — but questions still remain among many leaders of Louisville’s African-American community about Paul’s outreach efforts over the past six months, beginning with his April speech to students at Howard University in Washington, D.C.

As Paul begins his very early campaign for presidency in 2016, West End leaders are split on whether to welcome Paul’s outreach efforts on issues as an honest attempt to bridge a gap, or be skeptical that he is using them as cover to patch up his past record on civil rights issues.

Paul’s miscues on civil rights are well-known, particularly his multiple interviews in May of 2010 where he repeatedly questioned a key provision of the 1964 Civil Rights Act that prohibited business owners from discriminating against customers based on race.

This summer, Paul came under fire when it was revealed that his Senate staffer and co-author of his book, Jack Hunter, spent many years as a race-baiting, neo-Confederate radio host and columnist who spoke highly of Lincoln assassin John Wilkes Booth. Paul initially refused to fire or condemn Hunter, though he resigned two weeks later amid the backlash. The incident called to mind the overtly racist newsletters of his father, Ron Paul, in the late 1980s, which he claimed to have no involvement in.

Eddie Woods — the founder and CEO of the LIFE Institute, a west Louisville youth outreach and mentoring group — tells LEO he was invited to attend Paul’s panel, but declined.

“I’ve probably read too much about Mr. Paul’s history and who he’s been associated with,” says Woods. “He’s never really addressed it to the point of me changing my opinion of him.”

Woods felt that the event would simply be self-serving political theater for media consumption, both to help Paul gain political support and help the groups involved with publicity and fundraising, adding “I guess I just didn’t want my face to be one of the ones you saw when the cameras panned the room.”

During the time of the panel, Woods says that he was in a lawyer’s office trying to get a kid out of jail, and he spent the previous night trying to mediate a violent dispute among rival gangs.

“I’ve got a ton of stuff to do and being at that event was not one of my chores,” says Woods. “It’s very difficult for me to fake the funk. I can’t go up in there and act like I like this guy.”

Metro Councilwoman Attica Scott, D-1, is taking a different approach with Paul, telling LEO she is willing to give him an opportunity to make amends if he’s willing to put in the work and effort. Scott recently met with Paul to discuss the topic of vacant and abandoned properties in her west Louisville district, and hopes to follow up that discussion with specific action in the near future.

“I definitely believe people should give him a chance,” says Scott. “I would not begin to say that people should forget at all what he and his staff have said, but they should, at the same time, be open and willing to hear what he has to say today.”

State Rep. Reginald Meeks of west Louisville welcomes Rand Paul visiting to hear from his constituents, but adds that most of his policy positions are at odds with them. Meeks notes that Paul’s support for a GOP proposal to cut SNAP — the federal food assistance programs used by more than 34,000 low-income households in Louisville alone — by $40 billion, as well as his reluctance to end federal sequestration cuts and avoid the upcoming government shutdown, show he doesn’t have their best interests at heart.

“All of those things will only hurt poor people and people of color, so how can you stand in one room and speak against these things, and then come to our community and act as though you’re so supportive?” asks Meeks. “It shows a contradiction and the challenge that the Tea Party and the right-wing Republicans already have reaching out to voters of color, despite what they say.”

State Rep. Darryl Owens of west Louisville hopes that Rand Paul is serious about joining the fight for HB 70 in Frankfort, but he has his doubts. Earlier this year, Paul spoke to immigration advocate groups about the need to pass reform and avoid divisive rhetoric in his party, but wound up voting against the immigration reform bill that passed the U.S. Senate.

“I don’t want to impugn any sinister motives to whatever he’s saying and doing,” Owens tells LEO. “But all you have to do is look at his track record of what he says and what he does, because they don’t match.”

Raoul Cunningham, a local civil rights legend and president of Louisville’s NAACP chapter, tells LEO he’s “more concerned about his votes than his public posture,” adding that Paul received a 4-percent out of 100 rating on the NAACP legislative scorecard. He wants to see Paul work to repair the section of the Voting Rights Act thrown out by the Supreme Court this summer and help avoid a government shutdown.

“Before I would attempt to judge him completely, I would want to see what he does on these issues,” says Cunningham. “His vote will be the most important thing that determines what the community thinks of him and how they ought to view him. And I’m not even throwing in that nut he had on his staff and his previous statements.”

Whether or not Paul is being genuine in his attempts to connect with leaders in west Louisville, Rep. Meeks believes the underlying motive revolves around Rand Paul’s presidential campaign and what events like the one at Plymouth on Monday mean for it.

“These are photo ops for him, for his campaign,” says Meeks. “And there’s no doubt they’ll show pictures of him with black audiences in his campaign materials for his presidential campaign. And folks need to understand that they’re being used.”