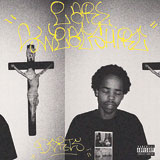 Unlike some of his Odd Future cohorts, Earl Sweatshirt seems less prone to needlessly provoke controversy. Where the gleefully vulgar Earl used particularly violent imagery as its currency — especially directed toward women — on Doris, Sweatshirt seems to have matured both physiologically and intellectually. His voice lower, Sweatshirt raps about his hope not to offend, trying to parse the difficulties of maintaining successful relationships with his budding fame. Of course, none of this is to say that Doris is some kind of Public Enemy-level social commentary, as Sweatshirt is as apt to rap about blowjobs or weed as he is relationships, weaving in and out of this complex material with an ease usually reserved for veterans. Per usual, the production here is unparalleled, elevating Doris so far above so much pop-rap dross.