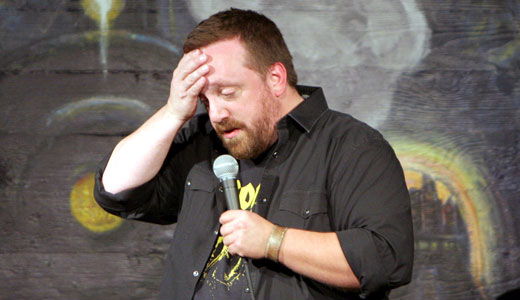 Derek Sheen is a walking, talking, bearded ball of insecurities — a Seattle-bred version of Woody Allen, perhaps. Now living in Los Angeles and married, Sheen spends most of the year on the road touring with greats like Patton Oswalt, Janeane Garofalo and Brian Posehn. Currently spearheading “The Angry Cuddles Tour” with friends Bryan Cook and Heather Thompson, Sheen returns to The Bard’s Town this weekend.

LEO: We’re super excited for you to come back through …
Derek Sheen: Yeah! This is something like my fifth time through Louisville. It’s a really refreshing place to do stand-up comedy; there is an awesome abundance of amazing energy just waiting to get entertained.

LEO: It seems the alt-comedians do better here than the more standard club-style comedians. Why do you think that is?
DS: In scenes like yours, comedians have to do it on their own. They had to take the onus of responsibility upon themselves to put on a good show. When you build a loyal audience like that on your own, there’s so much more energy — it doesn’t all have to be pre-planned like in a nightclub. People just show up, almost out of trust rather than expectation, and that fuels such a healthy environment for comedians. It’s like the inmates run the asylum.

LEO: Do you think proper comedy clubs are irrelevant?
DS: It’s changed. For a long time in the scene, they were the building blocks of comedy — it’s impossible to deny that. But now the comedy clubs are just food and drink depositories — they’ll do anything to get butts in the seats so they can sell their two-item minimums. The only thing that fills clubs now are celebrities; that’s what people want to see. They no longer go for the struggling artist who has an amazing take on the world. When it becomes something people plan their night around, birthdays, bachelorette parties or whatever, that’s not where great art happens. Artisans are people who build something on their own. It’s not about selling a nacho plate and a glass of wine.

LEO: In that case, parallels can be drawn from comedy to all other forms of art that seem to be getting exploited in modern society.
DS: Sure — it reminds me of the punk scene in the late ’70s where maybe the quality of the music wasn’t what everybody was used to, but there was a uniqueness and a rawness to it that brought people into it.

LEO: Tell me about “The Angry Cuddles Tour.”
DS:Well, I’ve come through the past four or five times by myself and working with local comics, and I love it. But I have a lot of friends who are curious about why I keep coming back to the Southeast. So I’m starting to bring my friends out. Bryan is one of the funniest guys on the planet. He is one of the kindest people I know, but he’s the least gregarious and most brutally honest person, as well. He’s curt and seething with white-hot rage. And Heather is another one of my all-time favorite people; she is the kindest, gentlest person. Two nice people and a grump: “Angry Cuddles.” But truthfully, I’m bringing them so I get the privilege of watching them every night. I don’t really care about the audience … is that wrong?