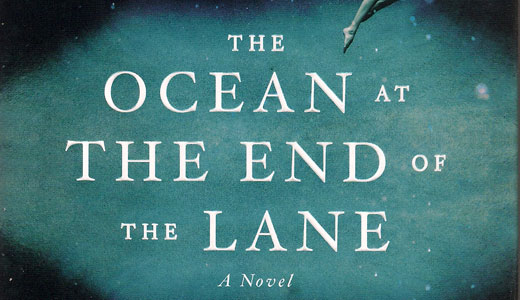 If you are hanging out with book lovers, specifically the fantasy and comic book variety, and you say something like, “I have a crush on Neil Gaiman,” your comment is likely to be met with a few eye rolls. This is not because your audience disagrees with you. Actually, it is quite the opposite. It’s because so many people love Neil Gaiman, it’s the geek equivalent of saying you think Johnny Depp is cute. Duh! We all do.

Part of Gaiman’s charm is the nostalgia in his work. There is romance in nostalgia, from Gaiman’s fairytale love affair in “Stardust” to his folklore deities in “Anansi Boys” and “American Gods,” and his latest book, “The Ocean at the End of the Lane,” Gaiman heads to the ripest berry on the sentimental tree — childhood.

Although the majority of the book is told from a 7-year-old boy’s perspective, the story begins with a man returning home to attend a family funeral. Once he is in his hometown, he is pulled toward a farm he can’t recollect yet distinctly knows. There, he is reintroduced to mystical maidens from his childhood. Memories of allegiances outside of his family, the possibilities of magic, unknown forces and the ever-present battle between good and evil open up. The story, though linear, is fantastic and reminds us of points in our own life when everything did seem possible — a part of innocence that makes the world spectacular and supremely frightening.

Gaiman has written books for children and adolescents, of which “Coraline” and “The Graveyard Book” are probably the most famous, but “The Ocean at the End of the Lane” is distinctly for adults. Mature themes such as adultery, suicide and childhood loss are intertwined on a stage of supernatural, mystical forces.

I drove to Lexington to get this book. Or rather, I went to see Neil Gaiman speak and get the book signed. The room was filled with super fans like me. Silent and at attention, with books and memorabilia stacked in our laps, we were ready to wait in line until nearly the next day to meet him, while Gaiman told the story of how he was missing his rock-star wife (Amanda Palmer), who was away recording an album, when he wrote “The Ocean at the End of the Lane.” The man has a way with words (you don’t become a cult celebrity author without that trait), and we sat in rapt attention until a band started playing next door.

He was annoyed. He wanted the band to stop.

But here’s what was so great about it. Rock ’n’ roll was disturbing Gaiman’s life again. And that playfulness, the push-pull between the expanse of childhood and being a productive adult, between magic and reality, between artists who make loud music hanging out with quiet wordsmiths, is what makes life interesting.

So, despite the eye rolls, I am still smitten with Neil Gaiman. After relishing a guitar-fueled interruption, having books signed and waking up the next day, sleep deprived and diving into an enchanting book titled “The Ocean at the End of the Lane,” it’s hard not to be.