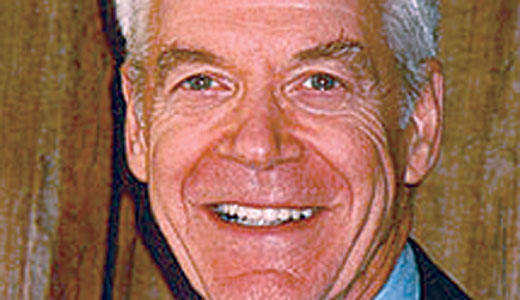 It’s not every day that an octogenarian rock star comes to town, but this week’s visit from Dr. Caldwell Esselstyn is big news in certain circles. In fact, his talks Wednesday at U of L and Thursday at Bellarmine are sold out.

The surgeon-turned-cardiologist came to national prominence after appearing in the 2011 food documentary “Forks Over Knives,” which highlighted his Cleveland Clinic research proving heart disease can be reversed through diet. Others know his name through Bill Clinton, who slimmed down after following the whole foods/plant-based lifestyle espoused by Esselstyn.

A couple decades ago, the man his friends call “Essy” began working with nearly 20 patients with severe coronary disease — people who’d been told nothing more could be done. Most of them stuck to the diet and have remained symptom-free — and their angiograms show their formerly clogged arteries have opened up.

If this all sounds a bit dour and remote, I was there, too — until those chest pains showed up. With heart disease in my family, I promptly got checked out and ended up with two stents.

I previously would’ve agreed with Esselstyn’s admonitions — intellectually — while casually ignoring them day-to-day. But with knowledge of my own heart disease, detachment was no longer an option. My wife and I adopted the lifestyle, cold turkey. It’s been transformative. (And it’s not that difficult.)

An overarching theme of “Forks Over Knives” is the insanity of considering medicine and surgery as viable mitigation options when behavioral changes can accomplish the same goals with less physical or financial pain. One particular line captured it: Asked what he’d say to someone who described his meat-, dairy- and oil-free diet as “radical,” Esselstyn deadpans that taking veins out of your leg to bypass clogged arteries seems slightly more radical. Bingo.

Esselstyn recently chatted with LEO in advance of his visit.

LEO: Americans are acculturated to equate protein with meat. So, where do you get your protein?
Caldwell Esselstyn: The only food we ask you to eat is the basic food we have been eating forever: whole grains — cereal, bread and pasta; 101 beans or legumes; red, yellow and green leafy vegetables; and fruit. Whole grains, legumes/beans and vegetables are loaded with protein. Hamburger is 37 percent protein. Spinach is 57 percent protein. Popeye had it right.

LEO: I recently asked several cardiologists if they discuss the plant-based diet as part of patient recovery. They basically said, “Hey, it’s Kentucky, no one wants to hear that.”
CE: Most physicians are uncomfortable talking to patients about lifestyle changes. That’s well documented. If you could arrange for an imaginary visit with some Louisville rednecks to Okinawa, they might say, “You have more people who live to be 100 here than anywhere on the globe, but you eat mostly plants. We think what you’re doing is radical. We like what we do back in the States.”

And the people there would say, “All that illness. You’ve got an epidemic of strokes and heart attacks and cancer and diabetes and obesity and hypertension. There’s so much illness there that your country is going bankrupt. That sounds radical to us.”

LEO: How do you feel being such a prominent figure in this sort of movement?
CE: It has its pluses and minuses. The main thing is, it gives us an incredible opportunity to educate and share with others the knowledge we have gained through research. It’s beyond belief how something as gentle, safe, inexpensive and promptly effective as food can not only protect a nation from bankruptcy but also markedly enhance the likelihood of eliminating 75 to 80 percent of these chronic, killing diseases.

LEO: What’s it like battling the status quo?
CE: If everybody else was doing this, I’d probably be trying to learn to play the piano and windsurfing. What makes it a challenge is, the only people who are against us are the food industry, the people who make drugs like statins, the people who makes stents and do bypasses, and my own profession. The odds are pretty well stacked, but that’s what makes it fun. We’ll fall back on the outcomes, and beat ’em in the trenches.

LEO: Has the Clinton association helped?
CE: I don’t think it’s hurt, but I wish I could get through that firewall. If he’s going to be out there as the poster child, it makes me nervous as hell to know what he’s eating.

LEO: You could retire and take it easy. Why don’t you?
CE: The reason I stay passionate about this is that the research reinforces that we could be at the cusp of a seismic revolution in health. And it will never occur because of the invention of another pill or drug or procedure, or building another cardiac cathedral. It will only come when those of us in the healing profession have the will, grit and determination to share with the public that it’s the optimal lifestyle that will empower them to be the locus of control — so they never have to have these common chronic, killing diseases.