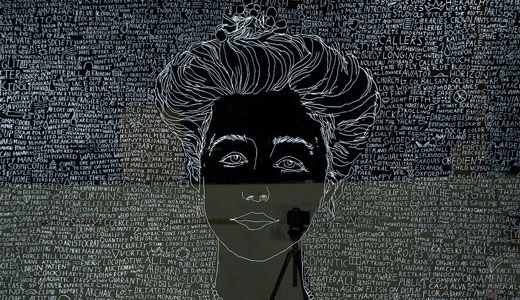 Launched with a fanfare of embossed invitations and calling cards, Jacob Heustis’ “Debutantes” was introduced at Swanson Contemporary earlier this month. The exhibition of new works was created by Heustis through a process of etching mirrors with diamond rings, and it represents both technical innovation for the artist as well as thoughtful continuations of Heustis’ signature interest in exploring popularity and pop culture.

As a child, Heustis visited the former residence hall of Daughters College, a preparatory school for young women in Harrodsburg, Ky. He noticed graffiti on dorm room windows that was carved into the panes of glass by the former residents. He later learned they used their diamond rings. Advancing this genteel method of mark making, Heustis’ pieces are large-scale portraits of notorious American celebutants and socialites he created using an inverted diamond ring as his etching tool.

In selecting which “debs” to depict, Heustis looked for notorious party girls whose ultimate accomplishment was largely the achievement of their celebrity status. Consequently, it is Paris, not Nicky, Hilton’s visage that serves as the anchor image of the exhibition. Likely the most well-known of the women in contemporary culture, Paris, whose autobiography Heustis read in the course of his research, is surrounded by words that are a mix of modest firsthand report and pornographically detailed secondhand accounts by personal acquaintances and paparazzi. Paris serves as the contemporary departure point for interpreting the other heiresses, such as Brenda Frazier and Consuelo Vanderbilt, who were Paris Hilton equivalents in their respective eras.

Surrounding each portrait is a cloud of words lifted from biographical writings, press clippings and historical scholarship about the women, marrying their actual person to the way their persona was received by the public; this is compounded by the fact that in order to observe them, we are made aware of our own voyeurism in the mirror’s reflection. Heustis’ use of non-narrative language is fresh in its resemblance to word-frequency matrixes used by search engines, but its verbiage is decidedly old-fashioned. The artist took pains to use only slang and verbiage from the eras in which the women were in greatest notoriety, preserving the relativity of their depiction in the media and social mores of the day. The language serves as the visual equivalent of gossip and works beautifully as an accompaniment to their portrayal.

Brilliantly depicted in the gallery is the tangled relationship of Casey Johnson, heir to the Johnson & Johnson fortune and famous girlfriend of reality TV star Tila Tequila, and former BFF of Paris Hilton. Purportedly originally selected to star with Hilton on “The Simple Life,” she cited turning the role down as “the stupidest mistake in her life,” as her dream was to “become an actress.” Situated across the gallery from Hilton and depicted in less than half the height, the two portraits reflect onto each other, conflating and tangling the women’s words, identities and images.

At a time when wealth is compounding for the richest in our society and many feel increasingly constrained by our economic plight, “Debutantes” serves as a reminder that wealth cannot furnish freedom.

The show is an interesting, tongue-in-cheek look at how celebrity is created and compounded by our interest in beholding, and it makes explicit the idea that our voyeurism is an act of participation in the lives of those we observe.