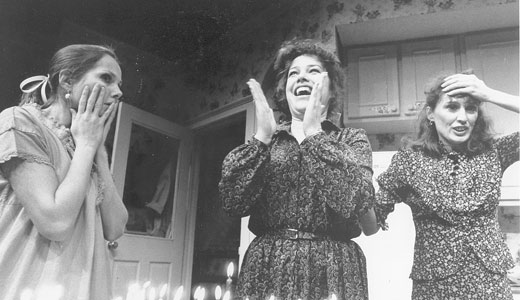 Kathy Bates in Crimes of the Heart, 1979

Fourth Street today is a conglomeration of office buildings, the behemoth known as Fourth Street Live and the newly acronymed SoFo, a commercial strip where wig stores butt up against purveyors of artisan chocolates. Rewind 50 years, however, and down an alley next to the Louisville Public Media offices, in the former Gypsy Tea Room, resided a fledgling company called Actors Theatre of Louisville.

Formed in 1964 with the merger of Actors Inc. and Theatre Louisville, Actors Theatre of Louisville (ATL) has gone on to become one of the most renowned regional theaters in the country and a crown jewel in Louisville’s artistic scene. This season marks their 50th birthday, and ATL is celebrating big time, with parties, auctions and a new exhibit, “50 Years, 50 Great Moments.”

From the large-scale black-and-white photographs in the main lobby to the smaller offerings sprinkled throughout the upstairs hallways, “50 Years, 50 Great Moments” traces the theater’s history from its humble Gypsy beginnings all the way up to its swanky digs in the former Bank of Louisville building. From the theater’s second home inside an abandoned railroad station, to the renovation of the current building, up through the founding of the Humana Festival and to the present day, the story “50 Years, 50 Great Moments” tells is of a crew of passionate young people who wanted to create some great theater in a town they loved, and who had no idea the kind of legacy they would be creating.

While the exhibit didn’t open to the public until the season officially kicked off this week, LEO was able to get an early peek courtesy of Gallery Director Roanne Victor. Petite and chic in a dress she tells me is older than I am, Victor has been a part of ATL since its inception. As a member of Actors Inc., she saw the theater through the merger in 1964 and up to its current incarnation.

“We were just a bunch of strong-minded kids, really,” she says, speaking about her days with the original company, headed by Ewel Cornett and Richard Block. “We were all under 30, and our parents paid for most everything, since we had no money ourselves.”

The people in these photographs are all old friends, and as we wander through the gallery, she narrates enthusiastically, spinning yarns of lobby parties with bathtubs full of gin and guests in Groucho Marx glasses.

As one of the only living members of the original company, Victor was largely responsible for identifying most of the people in the photographs; as she puts it, “I’m the only one who knows these people, because most everyone is dead!” It’s a task she takes on with abundant affection, working with 50th Anniversary Projects Coordinator Evan McMahon to put names to the figures in the 50 images.

Victor and McMahon were also responsible for culling 50 images from the two large filing cabinets provided by The Courier-Journal, bursting with photographs from half a century of articles and reviews. McMahon says ATL tried to find a balance of images from each decade, with the grainy black-and-white shots of the ’60s flowing into the crisp color shots of last season’s “Girlfriend.”

One thing that is markedly missing from the exhibit are “behind the scenes” shots; nearly every image is of a performance or official event. It’s a disparity Victor regrets but one that is hard to correct, partly because all of the images from which she and McMahon could choose were published alongside articles in the C-J, but more so because of the consuming dedication with which each of the figures in these photographs worked. “There are no pictures of ‘life,’” Victor explains. “They’re all very specific, theater shots. There are no weddings or christenings or birthday parties. Most of these people never left the theater.”

Visitors will flock to photographs of a young Kevin Bacon or Kathy Bates getting their feet wet in productions of yesteryear. But for Victor, her favorite image is one from 1982 of the hanging of a banner for the 6th Annual Humana Festival, the first where the corporation took on a title sponsorship role. It’s one of the hardest photographs for Victor to identify, and many of the figures, primarily people who worked in the shop, have yet to be named. Still, Victor isn’t giving up. Every person on the wall was an integral part of the evolution of ATL, she says, from the Jorys to the ushers. They all deserve to be recognized.