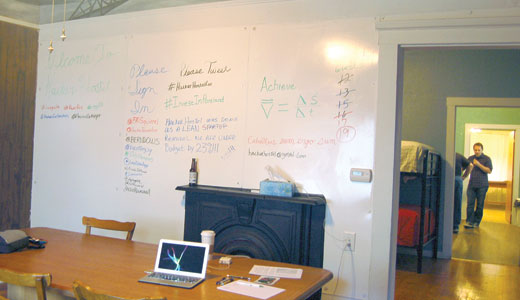 Halfway through a detailed explanation of the cost-saving measures he and his wife took during their renovation of a rundown shotgun house in Portland, Richard Meadows interrupts himself and scrambles for a pen. “I just thought of something,” he explains, apologizing while he scribbles a reminder to talk to a fellow entrepreneur about potential buyers for a commercial grade stove he needs to unload. Thought recorded, he turns back to our interview, but not before a dictum: “This is how things happen.”

Meadows calls it an urban collision — when a potentially amazing idea is sparked while two people are conversing over something else, maybe during a more formal conversation like ours, perhaps more casually after someone bumps into an old friend outside the bank. This isn’t a radical concept, of course. Some might call it fate or kismet. Zappos CEO Tony Hsieh prefers to call it serendipity and has said he forcibly accelerates it by minimizing exit points within his company’s Las Vegas-area headquarters in order to maximize metaphorical collisions of employees and their ideas.

This idea of accelerated serendipity or urban collisions is one of the driving forces behind Hacker Hostel, a new live-work rental space opened by Meadows and his wife, Suzanne Bernert. Located in Portland among the hubbub that is the Gill Holland-led neighborhood revitalization project, the hostel caters to small groups of tech entrepreneurs who want to collaboratively breathe, sleep and eat their projects for a few weeks or months.

“It’s for people who are past the napkin stage but still on the paper phase,” says Meadows.

Instead of a coffee table, the Hacker Hostel living room has a 5-foot conference table, behind which is a giant whiteboard wall, perfect for mapping out ideas and notes. The room’s power outlets have USB ports for charging gadgets. The sleeping areas — one private room in the back and one open room with two sets of full-size bunk beds — are minimal but doable. The furniture and kitchen appliances aren’t high-end, but the modem and WiFi are.

“These guys are used to that,” says Meadows, who spent years working in marketing for a local Internet service provider before moving onto general tech and social media consulting.

If designing a business plan around tech startups sounds hyper-specific, that’s because it is, but there is a precedent. Hacker hostels already exist in expensive urban metropolitan areas like New York City and San Francisco. They also exist in communities within Boulder, Colo., and Kansas City, Kan., both of which Meadows and Bernert visited during the planning process for their own hacker hostel. The typical model operates more like a traditional European hostel, with individuals paying nightly or weekly rates. They are drawn in by the low cost and the environmental benefits of working with other vetted, like-minded tech entrepreneurs or makers.

That model wouldn’t work here, the Louisville couple decided, but focusing on dedicated groups of four or five just might.

The Ohio River Valley isn’t Silicon Valley, but the startup culture is vibrant and rapidly growing, as is the overall tech scene. A few years ago, when Meadows says he first read about hacker hostels popping up on coastal cities, the concept of opening one in Louisville seemed farfetched. A lot has changed since then.

CafePress, an online retailer, relocated its headquarters from Silicon Valley to Louisville last year. Zappos, a subsidiary of giant Amazon.com, operates a facility in Shepherdsville. Earlier this month, eBay announced it was investing up to $45 million in Louisville and creating 150 new full-time jobs at its local facility, which creates, develops and runs online shopping sites for brands and retailers.

On a smaller scale, Louisville Metro launched a program called Digital Dixie over the summer to help local brick-and-mortar businesses along Dixie Highway establish websites, acknowledging that having a web presence is rapidly becoming essential for even small companies.

Startup and tech-centric support groups and networking events like the weekly #OpenCoffeeLou are commonplace. Startup Weekend Louisville, a three-day event in which groups explore, develop and pitch their ideas to established members of the business community, held its third event of the past 12 months last weekend. (Business First reported that CafePress CEO Bob Marino even approached Pivotal, the winning team, about the digital photo organizing software they’d pitched.) Startup Weekend was followed by StartupPalooza, which is just one of the tech-focused events being held as part of IdeaFestival 2013.

Locally made apps have already gone on to achieve national attention and acclaim. They include Over, which allows iPhone and iPad users to easily place text over their photos, and Kodable, which teaches kids from kindergarten to second grade the fundamentals of programming through a series of iPad games.

It’s unlikely those will be the last Louisville success stories, especially if Velocity has anything do with it. Velocity is a Southern Indiana-based entrepreneurial leadership group launched at the beginning of the year. Their flagship program is a business accelerator, which gives a select number of startups mentorship, workspace and $20,000 in exchange for 6 percent equity. The initial cohort featured two Kentuckiana groups and three out-of-state groups — from Seattle, San Diego and Los Angeles — at least one of which is considering basing their newly established business in Louisville permanently.

Even the library is jumping on board. Louisville Free Public Library last week announced that cardholders now have free access to Treehouse, an online video and interactive learning platform that teaches people how to design and develop websites and mobile apps. Known already within the tech world, Treehouse was previously out of reach for the general public because of its $300 subscription free. Now, it’s a high-quality free resource, particularly good for economically disadvantaged residents or those not already connected to members of the local tech community.

In all of this, Meadows sees the organic beginnings of a strong startup ecosystem, which he feels Hacker Hostel is entering at the right time. However, much like the startups he plans to house, the threat of failure looms.

Meadows recalls telling Ty Adams, an established member of the local tech community who has acted as a mentor at past startup events, about his plans. “He was the first person I talked to. I said, here’s our vision … His first question back was, ‘What will you do if it fails?’”

The question caught Meadows off guard, but kept him realistic and modest with his initial monetary investment. It was an entrepreneurial lesson for a man who wants to help entrepreneurs. Just the kind of practical planning about logistics folks talk about over coffee, right before an idea for the next big thing strikes.